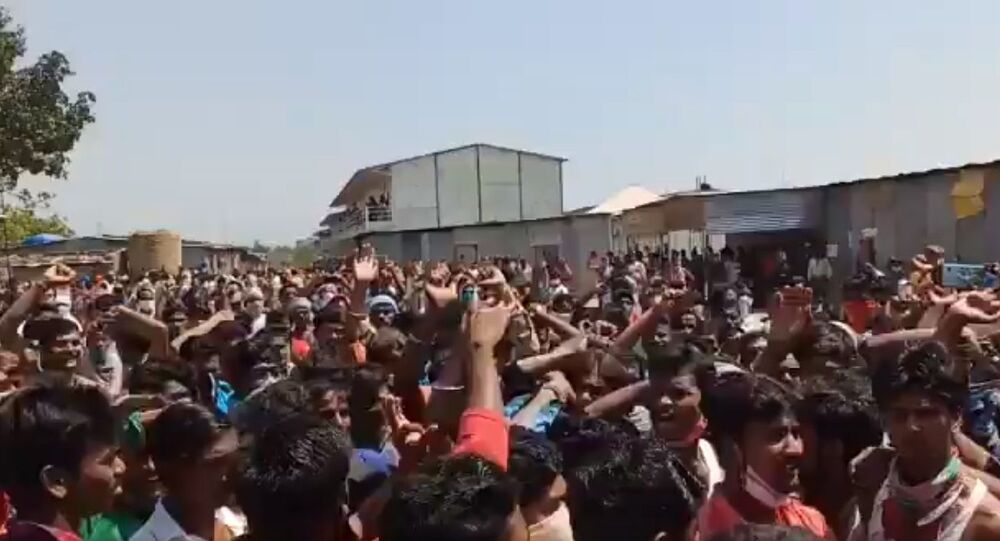 New Delhi (Sputnik): In March, when Prime Minister Narendra Modi announced a nationwide lockdown to tackle the COVID-19 pandemic, thousands of poor migrants left bigger cities on foot to return to their homes. States were instructed to take care of daily wagers wherever they were stuck.

Over 2,000 migrant workers in the Indian city of Hyderabad, Telangana state on Wednesday protested at the prestigious Indian Institute of Technology (IIT) for wage clearances for the last four months, demanding that they be allowed to travel back to their villages and hometowns.

When asked to join the construction work available in the Hyderabad campus of IIT, the labourers not only declined the offer, but resorted to violence and vandalism. They pelted stones and injured cops who tried to ensure discipline and social distancing amid the ongoing national lockdown. Two policemen were left wounded during the stone-pelting by the demonstrating workers, while a police vehicle was also damaged.

Videos of the mass protest surfaced soon on social networking platforms in India.

#Telangana -Thousands of migrant workers protested, in Sangareddy, for not been given proper food,no resources. These workers were part of construction work at IIT #Hyderabad. Police van also damaged during protests on NH65. Police/Collector talking to them. #lockdown #COVIDー19 pic.twitter.com/wZCiJCqxgj

Tension prevailed at IIT Hyderabad on Wednesday as migrant construction workers r agitated for the institution failed to provide them with proper food and sanitation. They attacked HR and policemen as well. #Hyderabad pic.twitter.com/ujz1j6Bz5E

​The district administration held a discussion with the union leaders of the labourers, which led to their construction company bosses agreeing to clear their salaries for March. They, however, may not get the payments for January and February for the time being.

Arrangements for fresh vegetables and food items for these workers have also been promised by the district administration, while the details of their return back home would be discussed later, local media reported.

India announced a major stimulus package of around $22.36 billion for the poor and for daily wage workers who lost their jobs during the lockdown. Several states have also issued advisories to city administrations asking them to ensure food and shelter for displaced workers. Landlords who have rented their properties to the labourers in metro cities have been asked to waive off their rents for some time.

Despite the measures, thousands of migrants are still walking for miles, from state to state, crossing cities and tolls, hoping to reach their hometowns soon amid the ongoing COVID-19 lockdown.