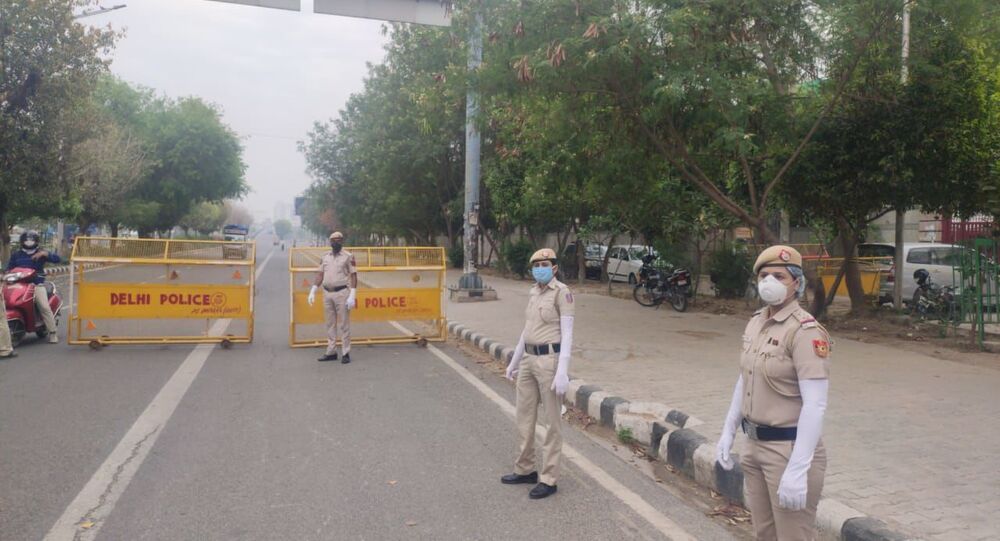 New Delhi (Sputnik): India is currently under the second phase of its lockdown which is scheduled to last until 3 May to combat COVID-19. The frontline warriors including cops, medical personnel, and authorities are working 24x7 for the good of the country.

Despite the continuous pressure of their families to also manage daily household chores, female constables in India are not leaving the battlefield, staying on duty, fighting and saving the country as committed frontline warriors.

Their resolve to battle COVID-19 is fast changing the general perception of female cops in their respective families.

Mausam Yadav, 26, posted in South Delhi district, got married three years ago. A mother of one-and-a-half-year old Ansh, she revealed that "after marriage she faced stigma from society about her job as a policewoman. She would face taunts that she should leave the job".

When COVID-19 hit India, her neighbours suggested she should take leave and be at home. But she resisted, saying: "I have worn khaki (police uniform) to serve the people. Abhi duty nahin karungi toh kab karungi (If I evaded duty at this juncture, when I would be needed)", Yadav stated.

Speaking to Sputnik, she said today her in-laws are proud of her and her husband is doing work from home. He actively helps her by taking care of their child.

Asha Rani, another female head constable, said being extra vigilant about required precautionary measures has become quite important for them, as they are the frontline warriors performing their duty.

"Keeping the threat of the virus and safety of all the countrymen, specially our own families, is very important. Masks and gloves have become an essential part of their uniform", said Rani, who has been with the Delhi Police for 20 years.

"My shift starts at 6:30 a.m. for which I have to wake up at 4 a.m. During those odd hours, getting transportation is really difficult but my husband drops me to my duty point and waits until my duty is over to take me back", she said.

Rani also explained that recently an area around her house was sealed off after which her family members told her not to go on duty and stay at home.

"I go for my duty daily and believe that if we (police personnel) do not perform our duty at this time then who will keep an eye on the violaters. My husband has been really supporting and motivating me to serve the nation. I have to maintain distance from my two kids -13 and 8, for their safety", Rani added.

Another female police official posted in the district of Dwarka shared that this is the first time she's been away from her two daughters for so long.

"With the rapid increase in the cases coming to light, I had sent my two daughters - 8 years and 2 years, away, a month ago, keeping their safety in mind. The elder one understands, but for the younger one it is difficult without motherly love and she would always just hug me whenever I returned home from duty", Jyoti Yadav, Sub Inspector, Dwarka South Police Station told Sputnik.

She further said as a mother it is really difficult. But the pandemic has made her even more mentally strong as a person.

"Doing all the personal work and performing my professional duties do tend to make me tired. But now I work with the mindset that we must keep working so as to keep our countrymen safe", Yadav added.

"They are also making masks for the poor, preparing food for the underprivileged, and also participating actively in patrolling and picketing", Atul Thakur, Deputy Commissioner of Police (South Delhi), told Sputnik.

According to the federal Indian Health Ministry, the country has reported over 23,000 cases of COVID-19 and 718 people have died due to the deadly virus.