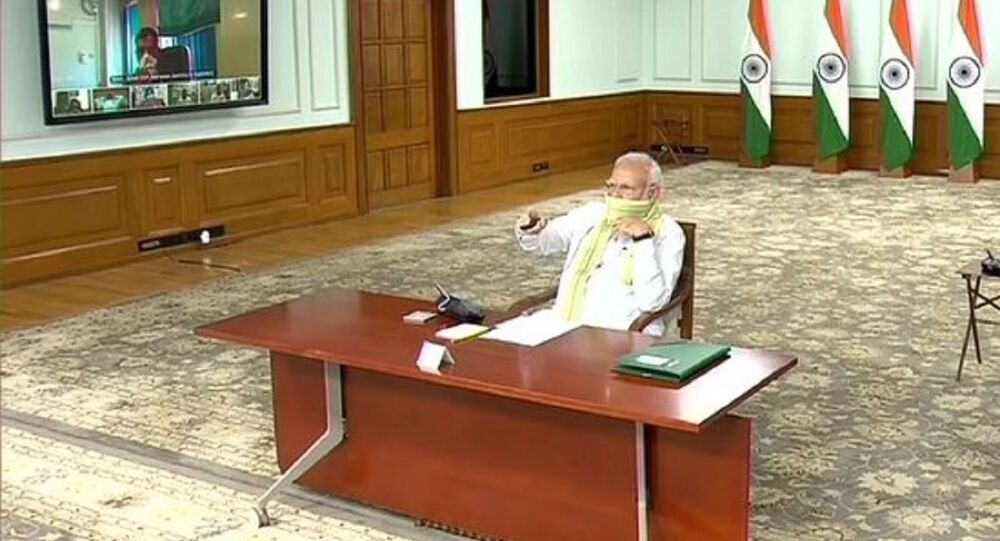 New Delhi (Sputnik): In April 1993, India historically decentralised power to the grassroots and institutionalised “Panchayati Raj”, which defines the rural governance hierarchy in the country's villages. Today, a five-member elected body of village residents forms the “Gram Panchayat” of each village, headed by a “Sarpanch” (village head).

Prime Minister Narendra Modi on Friday held a video conference with the heads (Sarpanch) of several villages across India and launched the online “eGramSwaraj” portal to digitally empower the planning, progress, and accounting of each Panchayat with full transparency.

The conference was organised as Friday marked the 26th anniversary of the “Panchayati Raj” system in the country.

Prime Minister @narendramodi begins a video conference with gram panchayats across India on the #PanchayatiRajDivas. pic.twitter.com/HVL2PP3Baw

​“To strengthen e-Governance in Panchayati Raj Institutions (PRIs) across the country, Ministry of Panchayati Raj (MoPR) has launched eGramSwaraj, a user friendly web-based portal. eGramSwaraj aims to bring in better transparency in the decentralised planning, progress reporting and work-based accounting”, the webpage of the newly launched portal reads.

According to information available on the website, the profiles of over 65,000 Panchayats (village councils) have already been created on the app.

PM @narendramodi announce launches a new unified e-Gram Swaraj portal and a mobile app which will provide the gram panchayats with a single interface to prepare and implement their Gram Panchayat Development Plan (GPDP).#GramPanchayatDivas pic.twitter.com/lw3YqvkPpj

​As part of his address, Prime Minister Modi stressed how the ongoing nationwide lockdown has made Indians more self-reliant. Linking that point of view to rural dwellers, he also announced a new “Integrated Property Validation Solution” called the “Swamitva Scheme”. The app will enable people to view information about their land and property online.

Netizens are appreciating the ideas of these new portals and tagging them as “monumental game changers” which would accelerate the digital transformation of rural India.

I complement @PMOIndia @narendramodi for addressing gram-panchayat pradhans across states..Heartwarming to c a direct-outreach by PM..As argued in an upcomin piece (for HT),prioritising rural dev. is an opp.dis crisis hs offered..Hope PM backs d effort w/t a fiscal stimulus soon!

This broad band connection of over 1 lakh gram panchayat is a game changer . It’s a golden chapter that you have started writing @narendramodi Ji .#NationalPanchayatiRajDay

​In his hour-long meeting, Prime Minister Modi discussed the coronavirus pandemic situation in India, the urgent need for everybody to wear masks, as well as the need to practice social distancing and use the government-released Aarogya Setu app to stay alert about getting exposed to the infection.

Interacting with Sarpanchs across the country through Video-Conferencing on Panchayati Raj Divas. https://t.co/irKVx4lKN6

​Keeping in line with Prime Minister Modi’s emphasis on adopting digital technologies, the government aims to connect over 100,000 rural councils or “gram panchayats” in India with high-speed fibre-to-home Internet between 2020 and 2021. India has over 597,000 villages, where over 70 percent of the 1.3 billion population resides.