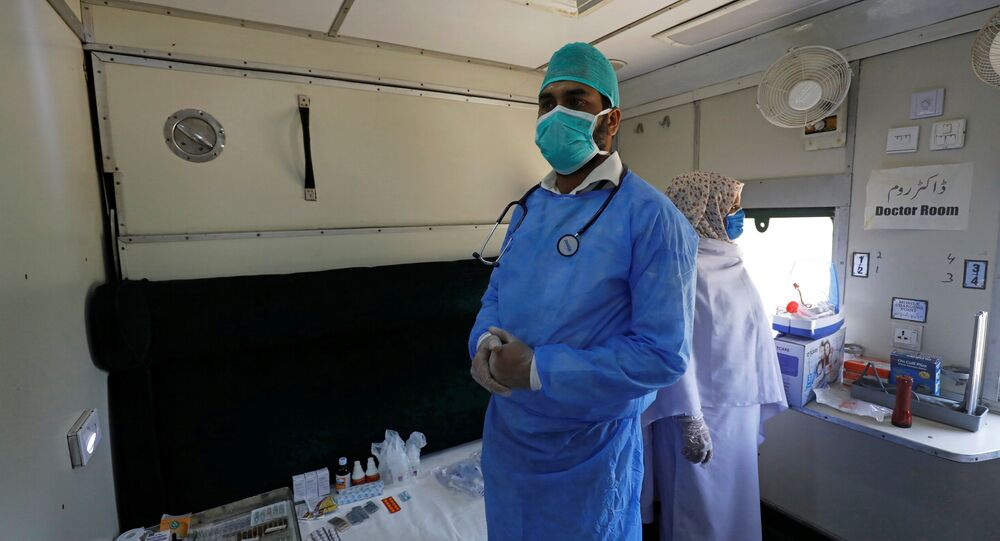 New Delhi (Sputnik): Reports have surfaced that Muslims in Pakistan have been flouting norms despite strict orders from the government to stay at home amid the COVID-19 spread in the country. The major cause of concern for the authorities has been religious gatherings of people at mosques for Friday prayers.

Stating that there needs to be a stricter lockdown in place or the situation will get out of hand, a group of doctors belonging to the Pakistan Medical Association has told the media that restrictions should not be eased or there will be a point when they will have to choose between patients.

Dr Saad Niaz, a gastroenterologist at the Dow University of Health Sciences, said, "What I fear is that we start treating patients on the road. We will be deciding between a 35-year-old and 55-year-old and giving preference to the younger one".

The warning comes amid a relaxation given to mosques to stay open during the holy month of Ramadan. Earlier this week, Pakistan's President Arif Alvi stated that mosques will remain functional for prayers during Ramadan and asked citizens and clerics to obey social distancing norms and exercise discipline while visiting.

According to reports by local media, doctors have also written to religious leaders asking them to urge people not to visit mosques during holy month of Ramadan, as it could lead to a spread of the infection.

The doctors urged government and religious leaders to continue to abide by recommended precautions instead of easing restrictions.

Addressing the emergency briefing, Dr Niaz said that the country has witnessed a 30-40 percent spike in COVID-19 cases in the last four days and expressed disappointment that people aren’t taking it seriously.

“If we don't act now, two weeks down the line, the situation will be very different. The wards are already 80 percent saturated. And, in Pakistan's case, there are more patients who are under 60 years of age”, Niaz pointed out.

So far, Pakistan's Prime Minister Imran Khan has refrained from imposing a nationwide lockdown, citing economic reasons and the impact on the poor, but has rolled out certain restriction norms for people to follow. However, people are venturing out of their houses to an extent compelling police to intervene.

COVID-19 cases in Pakistan have crossed 10,000-mark and the country has witnessed over 200 deaths.