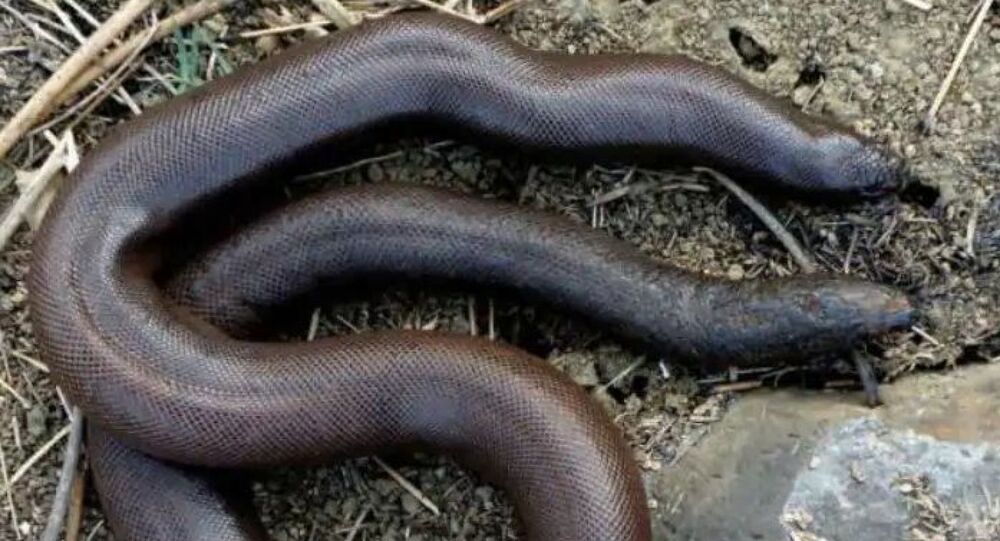 New Delhi (Sputnik): The two-headed snake, scientifically known as red sand boa a sought after species by illegal smugglers for its rarity and mythical stories associated with it. The creature is also protected under Indian wildlife laws.

Two people were held in India's Bengaluru on Thursday for trying to sell a two-headed snake while posing as delivery agents of an online delivery service, the police said.

According to the police, the duo has been identified as Mohammed Rizwan and Azar Khan, who dressed up as delivery boys from Dunzo, an online delivery service for essential commodities, and misused the delivery service in order to evade arrest.

"While Dunzo is doing a good job of door-to-door delivery of essentials during the lockdown, some are misusing it and doing illegal things. Crime Branch arrested 2 accused who used the cover of DUNZO delivery boys and procured and tried to sell two-headed snake (SAND BOA) prohibited under the Wildlife Protection Act", said Joint Commissioner of Crime, Sandeep Patil.

​During questioning, it was revealed that Rizwan works for Dunzo, while Azar packed the snake in the bag and was trying to sell it.

“The snake has a huge demand on the international market. A case under the Wildlife Protection Act has been registered against the duo based on a complaint by a range forest officer", Patil said.

Wildlife experts revealed the reptile is used for medicinal purposes and believed by many to bring good fortune.

The dual-headed snake, which costs around INR 5 million (about $65,690) on the market, belongs to the boidae family usually known as a sand boa. The reptile is protected under schedule 4 of the Wildlife Protection Act 1972.

Peek-A-Boo! Hiding in a Shoe, Snake Gives a Big SSSS-Scare to a Woman in India