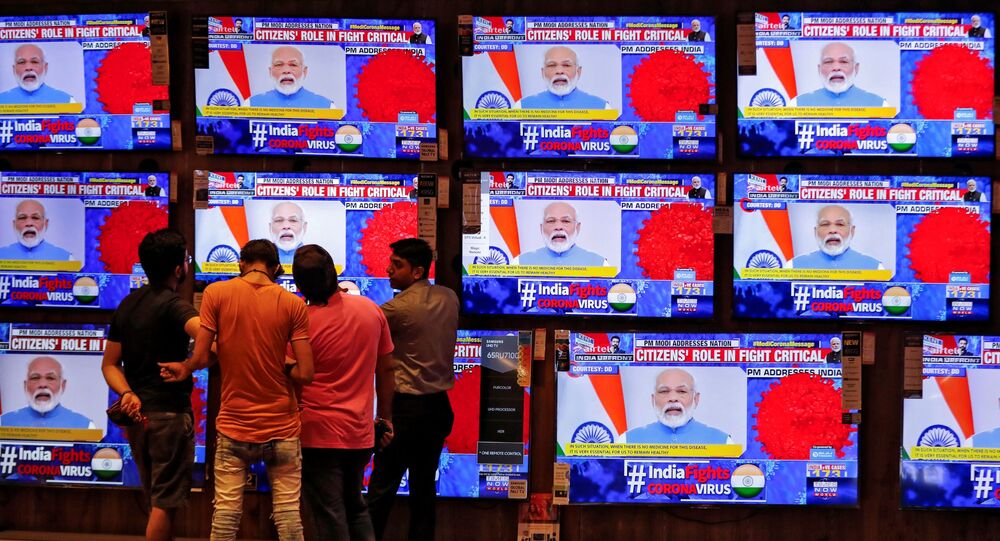 India went into lockdown mode on 24 March, forcing people to remain indoors, while a large section of the workforce in the organised sector switched to "work-from-home" mode. Such a flexible work environment only hitherto existed in some IT solution providers.

“Today, the world is in pursuit of new business models. India, a youthful nation known for its innovative zeal can take the lead in providing a new work culture....I call them, vowels of the new normal", said Modi in a LinkedIn post titled "Life in the era of COVID-19".

Sputnik has spoken with experts in several major sectors to understand if they are ready to adapt to the new work culture suggested by Modi.

The lockdown due to COVID-19 has forced India’s higher judiciary to shut down, except in urgent matters, where it held hearings via video conferencing.

Justice Madan B. Lokur, former judge of the Supreme Court of India, who headed a committee to digitise court proceedings in India said that the courts in the country are not entirely prepared for a technological shift.

“To some extent yes, but not 100 percent as familiarity is required since it is a new medium", Justice Lokur told Sputnik.

According to him, it has been a challenging process to shift to the electronic domain as “we had to computerise 19,000 courts". He however, agreed, that over time, digitising courts would help bring down the Indian judiciary's case load.

As per information given to the Indian Parliament in June 2019, there were 158,669 cases pending in the apex court of the country, while 4.36 million cases were pending in high courts in states. The National Judicial Data Grid shows there were 32.24 million pending cases in the country's lower judiciary, of which 75 percent were more than one year old.

Digital India has been a flagship programme of the Narendra Modi government and gradually more and more services have been included in the virtual platform. Currently, there are 53 mandatory services covering G2C (Government to Citizens) and G2B (Government to Business) segments in several identified sectors like finance, labour and employment, education, social welfare, health, agriculture, local governance, utility services, and the environment.

“So much of digitisation has happened in India in such a short time. Instead of going and hanging around village offices, decisions can be digitised and there is a timeframe by which it is delivered, on your systems... Now we have close to 400,000 community service centres. Even those who don’t have a smart phone or a laptop can go the village community service centres, make their submissions and get replies", K.J. Alphonse, former federal minister and current member of the Rajya Sabha, the upper house of Parliament told Sputnik.

© AFP 2020 / NARINDER NANU
Residents wearing a facemasks watch on television Prime Minister Narendra Modi's address to the nation during a government-imposed nationwide lockdown as a preventive measure against the COVID-19 coronavirus, in Amritsar on April 14, 2020

Alphonse suggested “yesterday it was another world, it is going to be a new world, with a completely new set of problems, with new value systems – children and parents get close to each other, we would have better values for realising that we need to share our resources".

“India’s digital landscape is changing and the digital footprint is quite visible even in rural areas, where you have computer service centres, digital merchants, etc. Several states, like Maharashtra and Haryana have set up right to services commissions – regulatory bodies to ensure the delivery of services to people", said V. Srinivas, additional secretary in the federal Department of Administrative Reforms and Public Grievances.

“We have extended the Virtual Private Networks to section officers, under secretaries, and deputy secretaries, and senior officials. On the governance part, work from home is being taken up – web groups and facilities for video conferencing are being created", Srinivas told Sputnik.

“The prime minister has always been futuristic about his ideas and we all understand the importance of digitisation. It reduces costs and improves lives. It has been estimated that the coming one or two years will be painful if we don’t adapt to the new situation", said Ashwini Mahajan, Chief of Swadeshi Jagaran Manch or Forum for National Self-Reliance, the economic wing of Rashtriya Swayamsevak Sangh (RSS). RSS is the ideological parent of India’s ruling Bharatiya Janata Party (BJP).

With the COVID-19 caseload mounting on the Indian healthcare system, many hospitals have had to stop or restrict follow up cases for regular patients, even in critical cases like cancer. Prime Minister Modi cited the example of telemedicine, where “we are already seeing several consultations without actually going to the clinic or hospital".

“In a scenario like the present one where people are restricted from visiting hospital, telemedicine is the best mode of getting their consult and know if they have to visit a hospital for sure or not. That saves a lot of time, energy and it’s safe for distancing", explained Dr Murali P. Vettath, Chairman of the Kerala-based Institute of Heart, Vascular, and Transplantation.

Dr Murali, however, said it does not have the scope for physical examination in mainly surgical specialities, where it is imperative to personally visit the doctor.

The future looks bright for telemedicine, Dr Murali stated. “This will in future help 50 percent of patients from coming to hospital, thereby hospitals will have to deal with only the real medical issues, which need to be tackled. It would totally eliminate high-end hospitals looking like a shopping mall".

Aside from digitising the healthcare sector and the judiciary, the lockdown has propelled India's educational system into the virtual classroom.

“What has happened as a result of the present situation is that the change has now accelerated tremendously. The good news is that universities which were prepared and were already approaching with the mindset how to use it effectively, have been successful", Asheesh Gupta, Pro Vice Chancellor of Jaipur-based J.K. Lakshmipat University told Sputnik.

Gupta, however, said the big challenge is to move a large number of staff to this new mode and having them understand that you will have to do a few things differently – creating engagement, finding ways of making the class interactive. The other challenge, he said, is the availability of connectivity: while in big cities it works well, it has some issues in smaller places.

“This is also a great tool for the democratisation of education. Suddenly it makes education much more available to a lot of people, who because of their economic conditions, because of their social condition, because of where they live, are not able to attend a formal university the same way as somebody else. This brings them within their reach. Over the next few years it will bring higher education, quality higher education to a much a much larger population of the country", Gupta added.

If India should find global relevance and application, it “should have the ability to drive a positive change not merely for India but for the entirety of humankind", Prime Minister Modi suggested, calling for the “right blend of the physical and the virtual” to make the country the “global nerve centre of complex modern multinational supply chains in the post COVID-19 world".