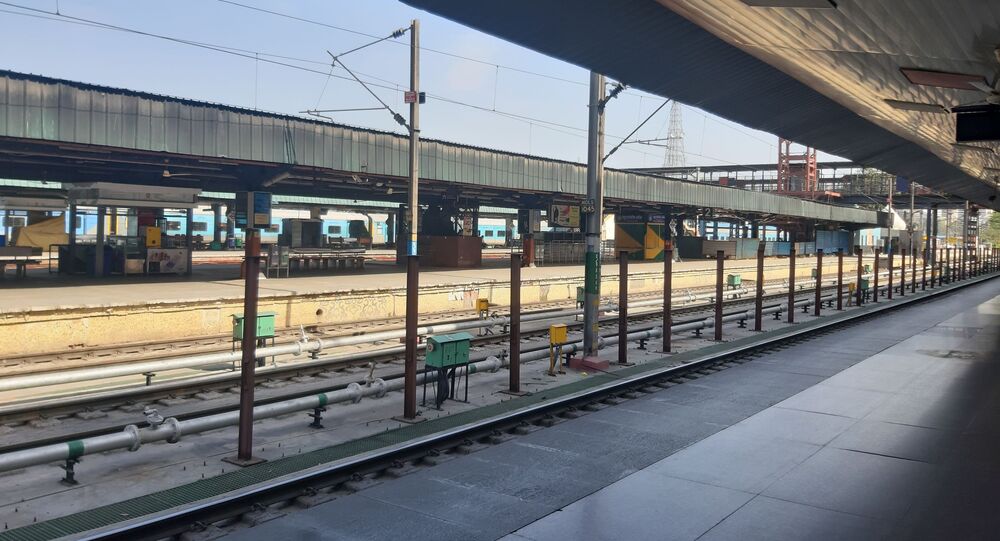 New Delhi (Sputnik): In order to prevent the spread of Covid-19 pandemic, Indian Prime Minister Narendra Modi has extended the national lockdown until 3 May. Indian Railways, however, are operating special parcel and freight trains to supply essential commodities like medicines and food grains across the length and breadth of the country.

Driver K. K. Chitkara emerges from the cabin and the sanitisation duo rub every nook and corner of the cabin with cleaning agents. Finishing off with the driver’s cabin, both head towards the train’s rear to sanitise the compartment belonging to the guard and railway protection force. The pair quickly reach the end of the train as the platform, which would normally be full of thousands of passengers, is completely empty.

New Delhi Railway Station used to handle almost half a million people per day on normal days and around 400 trains.

With only Covid-19 parcel special trains being operated right now, just a group of around 50 people including the train driver, guard, parcel staff, porters and railway protection force staff can be seen.

Just as he was embarking upon another trip and re-entering the sanitised cabin, a proud Chitakara tells Sputnik: “We carry relief materials like medicines, masks, food in the special parcel trains. This is my job. But at a time like this one also gets a sense that one is serving his nation.”

Asked about the trains’ operation in lockdown times, Chitkara says: “I have two years of my service left before I retire. I never witnessed empty platforms before this. The pandemic has shown that too.”

Piloted by Chitkara, the train is set to head to West Bengal state’s Howrah city, one of the places badly affected by Covid-19. Traversing nearly 1,400 kilometers, the train will reach the city in almost 20 hours. Chitkara, however, will hand over the train to another driver at Deen Dayal Upadhyay junction in Uttar Pradesh, 800 km from New Delhi. Before that the train will halt at Kanpur city to drop off the relief material.

The train is scheduled to traverse India’s coal city of Dhanbad in eastern Jharkhand state before finally reaching its ultimate destination, Howrah city in West Bengal.

Chitkara’s  Howrah-bound Covid-19 special parcel train is one of a number of special trains that Indian Railways have been waving off since the first week of lockdown in March to deliver essentials to all parts of the country.

Just 45 minutes before the departure of the Howrah-bound train, another Covid parcel special train from northern Ferozepur, in Punjab, has arrived at New Delhi Railway Station and then departed again, after unloading a parcel. Its ultimate destination is Mumbai, the capital city of western Maharashtra state, a distance of almost 1,900 kilometers.

Almost two hours before these two trains – another Covid-19 special parcel train was flagged off from New Delhi to Guwahati city in the north eastern state of Assam.

India’s Railway Minister Piyush Goyal shared on Twitter details of the parcel trains pressed into medical relief operations. “Railways has continued with seamless transport of medical items. Railways has transported 1150 tonnes of medical items across the country amid the Covid-19 lockdown.”

Helping fulfil PM @NarendraModi’s goal of ensuring healthcare for the people, Railways has continued with seamless transportation of medical items 🩹🩺💊

Railways has transported 1,150 tonnes of medical items across the country amid COVID-19 lockdown.https://t.co/XrSnzc4IGy pic.twitter.com/eHyDOyo34G

According to Indian Railways, eight parcel trains have been operating since 22 March – the day India observed a day-long “public-curfew” following a call from Prime Minister Narendra Modi. Within a week, Indian Railways deployed 20 such trains in various zones across the country for carrying essentials like food, medicines, masks, vegetables and fruits.

The 21-day Indian lockdown, which began on 25 March, has now been extended until 3 May.

The railways’ in an official statement, on 18 April said, “Indian Railways has identified 65 routes for Parcel Special Trains  since the start of the lockdown for perishable commodities including fruits, vegetables, milk and dairy products and seeds for agriculture purpose.”

“Time-tabled trains are being run on these routes. Trains are being run even on those routes where demand is less, so that no part of the country remains unconnected. Trains have been given en-route stoppages at all feasible locations, so that maximum possible clearance of parcels may be done,” it added.

Managing the operations is a Herculean Task, and extra caution means ensuring the trains’ sanitisation at every stoppage.

At New Delhi Railway Station, it’s no wonder why loading supervisor N. S. Negi’s mobile keeps ringing with calls from the parcel office seeking the status of the loading and unloading.

Negi says the railway administration has provided them with sanitisers and masks. In a lighter vein, he says his wife strictly ensures sanitisation and makes him take a bath immediately after reaching home and puts all his clothes for washing.

The ministry of railways said on 18 April, “To ensure enough availability of food grains for the Public Distribution System (PDS), Railways loads food grains double the amount what was done last year. In order to ensure that kitchens of all Indian homes continue to run normally, on 17 April, 83 rakes (3,601 wagons) of food grains were loaded.”

During the lockdown period between 25 March and 17 April, 4.2 million tonnes of food grains were loaded compared with 2.31 million tonne in the same period last year.

With No Food in the House, Kids Feed on Frogs in India's Poorest State Amid Lockdown - Video