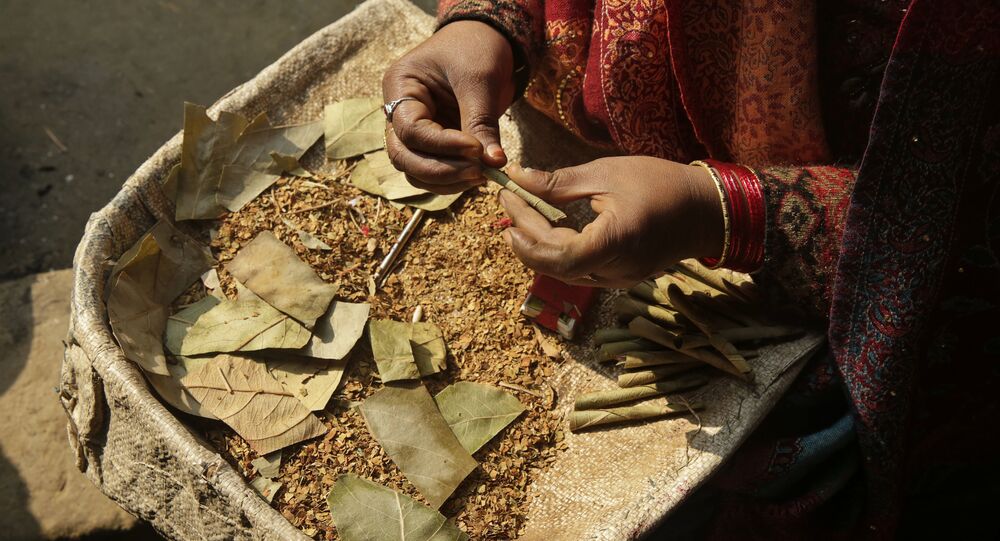 New Delhi (Sputnik): As a precautionary measure against the further spread of the coronavirus, 1.37 billion Indians have been locked down since 25 March. But many Indians have broken with the restrictions, either to hunt for a pack of cigarettes or a can of beer. The rule-breakers mainly seem to be driven by a mixture of addiction and anxiety.

India is home to 12 percent of the total population of smokers in the world – around 120 million people, according to the World Health Organisation (WHO). Many have been forced to break the hotline to feed their habit.

Under the lockdown, local grocery stores have been allowed to sell essential goods to people, but seem to be making quick profits on the side by facilitating what seems like a “secret” sale of tobacco items at double normal prices.

A box of domestic cigarettes costs Rs. 60. But amid the lockdown, one box is being sold at rates between Rs. 100 and Rs.120.
The shopkeepers have no explanation other than an abrupt -- *upar se rates badhe hai... Aapko milrai hai.. lelo.." pic.twitter.com/OL8hHax7h8

​Industry and research experts also told Sputnik that storing and selling at high rates at a time of crisis is a typical local market trend. They said, the extra “black money” would further worsen the corruption situation in the country.

According to analysts, if tobacco and alcohol shops are open, police could ensure social distancing and the sale of these items at normal prices.

Industry experts tell me that shop keepers and the government are taking advantage of the critical supply-demand situation to mint some profits. pic.twitter.com/Ny8t2SQbhX

They are clearly profiting from this. A packet of 20 now retails for 400. But times are such. Supply constrains has reduced the inventory levels across retail shops.

​“Well, the rates are being monitored by others also involved in this chain. Besides, selling cigarettes for us is also not safe, yet we are because people want them. It’s a risky business for us. If you want, this is the price,” a shopkeeper told Sputnik on condition of anonymity.

Recently, a petition is doing the rounds on social media, urging the government to allow cigarettes and alcohol sales during the lockdown which has been extended until 3 March – and is subject to further review.

“Around 70% of the Indian population is addicted to smoking and chewing tobacco. All the shops selling tobacco has also been locked down, which are forcing the people (especially young generation) to step out of the house on a hunt to relieve their stress. They are putting their own-self in danger and obviously the other too. Vendors who are providing the cigarettes and tobacco are doing it illegally and at 50 or 60% more price,” the petition page on change.org reads.

​Foreigners along with Indians are citing the example of India’s Kerala state, where the sale of alcohol has been allowed after some alcoholics committed suicide. After the sale of alcohol was permitted, the number of lockdown violators dropped in the state.

In Kerala, India - a population in the millions, they kept their liquor stores open and the number of people that died from Covid-19 was the least in the world. This is a period of unrest. We need to keep the sales of liquor and cigarettes. People are more likely to stay indoors!

India to Introduce Mandatory Alcohol Testing for All Ground Crew