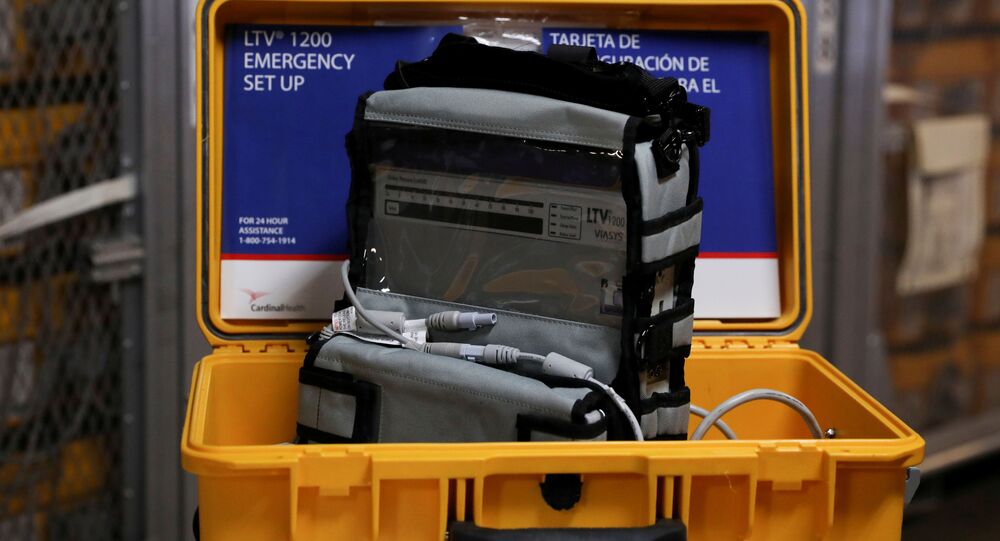 New Delhi (Sputnik): The total number of coronavirus cases has crossed the 13,000 mark in India. As of now, the number of cured and discharged COVID-19 patients is much higher than the death toll. The country is now working to ensure that doctors, hospitals and patients get all the necessary help.

India – which currently has around 60,000 ventilators in the country – has now revoked a ban on the import of used ventilators from other countries. Since the coronavirus is known to attack the respiratory systems of humans, maintaining a healthy stock of ventilators is extremely important.

"Considering the urgent need for ventilators to treat COVID-19 patients, several requests for relaxation in import policy to facilitate clearance of used ventilators have been received...in view of outbreak of COVID-19, the ministry has decided to allow the import of used ventilators by hospitals for six months," the order issued by Hazardous Substance Management Division reads.

Ventilators are mechanical breathing equipment that allow patients to maintain adequate oxygen supply in the body.

In India, the guidelines on dealing with waste materials do not currently allow the import of medical equipment such as ventilator.

India allows import of used ventilators from other countries till 30 September. #Covid_19 pic.twitter.com/dhsV3Ok2LK

​Even though this is seen as a desperate measure in desperate times, medical professionals are not sure that relying on used ventilators is a good idea.

“Let’s hope we do not reach a position where we would need to make use of these imported machinery. Even though they are generally refurbished, and can be termed safe, the reason they have been used and are being donated is because they are old models. Personally, I would suggest unless of course we are not in a do-or-die situation, we can work smoothly with the ventilators we already have here,” a central India-based doctor told Sputnik on condition of anonymity.

Netizens also expressed their uneasiness about the measure on social networking platforms.

#UsedVentilators can be imported for #Reuse in India . Very interesting. Only few days ago I was reading somewhere that imported Ventilators are lying unused in hospitals as no spares and service support was available. We are allowing another round of dump. Very unfortunate pic.twitter.com/BmGhDIgMds

​Amid the shortage of important personal protection equipment, ventilators and gears – Indian organizations like the Defence Research and Development Organisation (DRDO) are developing multi-patient ventilators – one of which would be capable of supporting four to five patients single handedly.

In the war against Chinese virus,
India’s DRDO is reinventing itself& quickly developing some critical med. solutions
From PPE to multi-patient ventilators to N99 masks
DRDO has taken on the task of rolling out mass supply of critical medical requirementshttps://t.co/lYAIVruqvo pic.twitter.com/E0ajcmU0RB

PGIM India and our employees are delighted to support #GovtofKerala’s #ProjectBreathofHope, an inspiring indigenous effort to make ventilators for just Rs.15K! May the force be with you!! #COVIDwarriors!! Hope this inspires many more!! pic.twitter.com/FXKyA7eY9e

​Currently, the total number of positive COVID-19 cases in India is 13,387, according to the federal ministry of health and family welfare. The death toll stands at 437, while 1,749 patients have recovered and been discharged from hospital.