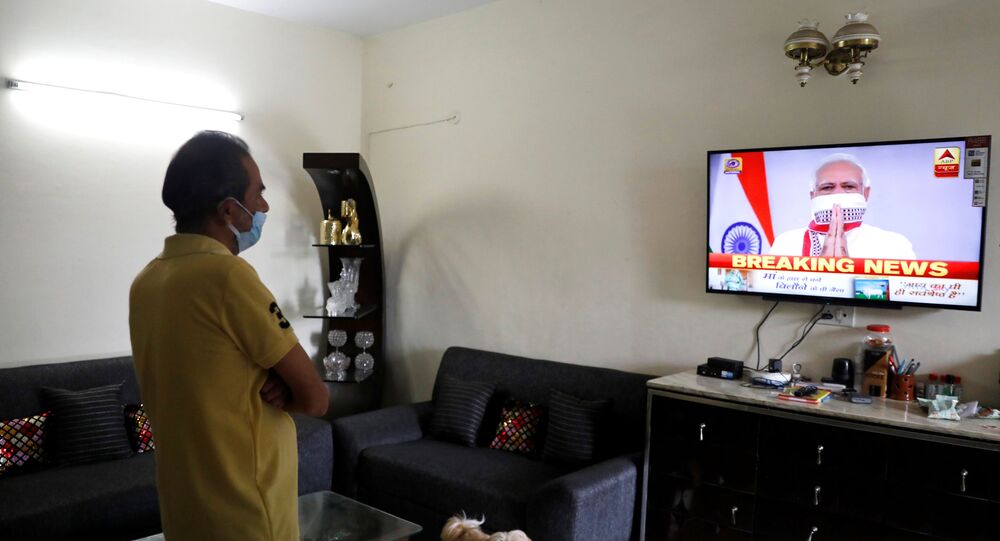 New Delhi (Sputnik): The spread of COVID-19 has forced India to remain locked indoors for an extended period of 40 days, which would end on 3 May. The extended national lockdown period would see “strictness and austerity in the fight against Corona”, said Indian Prime Minister Narendra Modi, who announced it on 14 April.

The prolonged lockdown could have tremendous impact on various sectors of the country. Sputnik spoke with experts from various fields to gauge the changes that could be brought about in the country and society after the COVID-19 lockdown.

For the first time, the present generation in India was forced to remain in social isolation. Several sociologists and psychologists have warned that it could have a long-term impact on people, especially for the elderly and children.

“If the lockdown continues, it would become worse than the disease itself for people, psychologically and sociologically. Though the lockdown per se might not be beneficial, the government has to do it since the pandemic is a worldwide phenomenon,” Professor V. Ramankutty, Head of the Achutha Menon Centre for Health Science Studies in Kerala, told Sputnik.

Professor Ramankutty said that although the social impact is not measurable, it has been noticed that people tend to get disproportionately worried about small problems.

“Humanity as a race has the resilience to remain in isolation, but it might not be equally right for the new generation,” he added.

On a positive note, if society could channelise the crisis, it could yield social solidarity and cohesion, as it was seen in some Indian societies during this lockdown, suggested the professor.

It was a double whammy for the Indian economy – a slowdown during 2019 and COVID-19 from the beginning of 2020. India’s Gross National Product or GDP growth was 4.7 percent at the end of 2019. The International Monetary Fund has projected GDP growth at 1.9 percent due to the lockdown, whereas US-based Barclays Research has put India’s growth projection at 0 percent for 2020.

According to Barclay’s, India’s economic loss due to loss of industrial output is estimated to be about $26 billion per week.  The country’s export sector also has suffered tremendously, with a decline of 34.57 percent ($21.41 billion), according data released by Indian Trade Ministry on Wednesday (15 April).

“The decline in exports has been mainly due to the ongoing global slowdown, which was aggravated due to the current COVID-19 crisis. The latter resulted in large scale disruptions in supply chains and demand resulting in a cancellation of orders,” said the ministry.

India’s industrial production, based on the performance of eight core industries between April 2019 and February 2020, was 1.0 percent. The manufacturing sector has also suffered heavy losses, with demand crashing to 50 to 90 percent of what it is due to the lockdown.

Deepak Sood, Secretary General of the Associated Chambers of Commerce and Industry of India – one of the country's top trade and industry hubs, told Sputnik the economy has come to a standstill, except for the food industry.  He said it was a global phenomenon; even if “everybody would go negative, India would still remain positive”.

As the lockdown is being lifted in a calibrated manner, industries outside the hotspots of COVID-19 would gradually start functioning in a regulated manner. “A back-of-the-hand calculation says, 30-40 percent of business should be back.”

“This is going to become a way of life. We will have to re-invent, realign business models, businesses will change, everything will see a sea of change,” quipped Sood.

S.P. Sharma, Chief Economist and Princip al Director of Punjab, Haryana, Delhi Chamber of Commerce and Industry – another umbrella organisation of industry in India, felt if the government was able to infuse at least 5 percent of the GDP as a stimulus package, industry would be able to grow at a rate of 4 percent.

“But it will take at least six months for the industry to recover from the current shock,” Sharma told Sputnik.

Prof K.Srinath Reddy, President of the Public Health Foundation of India – a national consultation body with a public-private initiative, said that the present crisis calls for a strengthening public health infrastructure in the country, given the fact that the state-funded healthcare system had come to the rescue from the pandemic. “An emphatic yes,” he told Sputnik.

“Now it is the time to commit strengthening district level hospitals, which is the backbone of healthcare, the first referral point,” said Sharma. “Not only that, India should revive the state-funded drug manufacturing companies, which were allowed to die a natural death or closed down, as India cannot depend on imports at times of crisis or the  private sector, which can only supplement governmental efforts.”

One sector that would see a transformation in the post-COVID period is education. Though the current academic year has gone topsy turvy, experts say the Indian education system has the dynamics to absorb disturbances from one semester to two.

While the federal and state governments have decided to promote all students in the primary classes – 1-8th standard, those in the higher classes and colleges are stuck, as they could not complete their annual examinations.

“It is a global phenomenon and barring the delay, I don’t think it would affect the ongoing academic year of students,” said an official of the federal Human Resource Development Ministry, who did not wish to be named.

“During the last two years, online education has picked up. Now with the present situation, it may get strengthened.  16 million students have already enrolled for various courses through the online system, and get the credit transferred to their conventional evaluation up to 20 percent,” he added.

“The educational system can absorb three to six months of break,” said Professor Ujjwal K. Chowdhury, Pro Vice Chancellor of Adamas University in Kolkata. Professor Chowdhury said, this would also trigger a new revolution in education in India – from traditional to e-learning system. He however, said access to stable and high-speed internet and laptops are fundamental for such a system.

“Many universities and educational institutions have already adopted such a method of teaching, digital mentorship, where the teacher has to engage his students. It is a challenge to teachers and students. Unlike a conventional educational system, digital learning is interactive and collaborative,” said Professor Chowdhury.

The worst-hit by the lock-down announced by the Indian Prime Minister were day-labourers. According to the Centre for Monitoring the Indian Economy, the unemployment rate in India has dropped to an all-time low of 38.2 percent in March 2020 in the organised sector.  During the first three months of the current year, the number of employed people fell to 396 million from 411 million and proportionately, the number of unemployed increased from 32 million to 38 million.

Vrijesh Upadhyay, General Secretary of Bharatiya Mazdoor Sangh, the Indian Labour Union, an affiliate of the ruling Bharatiya Janata Party’s labour arm, however, dismissed speculations on lost jobs. He told Sputnik, that the present priority is to save lives from Coronavirus and any such crisis in the employment sector would be reviewed once normalcy is restored.

Upadhyay, however, said the pandemic could lead to another crisis if the condition of migrant labours isn't addressed.

“Migrant workers are the worst sufferers of this lockdown. In absence of a job, residence and social security measures, they are struggling for their life every second. Even if we overcome this pandemic, the miserable condition of migrant workers would lead to another crisis. The Government needs to come up with a national policy on migrant workers to avoid such a crisis in the future,” Upadhyay told Prime Minister Narendra Modi in a letter on Thursday (16 April).

India has not officially come up with an estimate of economic loss or the presumptive loss in other sectors, as the lockdown is still in force. After Prime Minister Modi’s announcement on the extension of the lockdown, the federal Home Ministry laid out a graded relaxation for some key sectors like essential industries and farming.

But the COVID-19 situation does not appear to be abating. On Friday, the number of positive cases was 11,201, an increase of 724 cases in a day according to data released by the federal Health and Family Welfare Ministry.