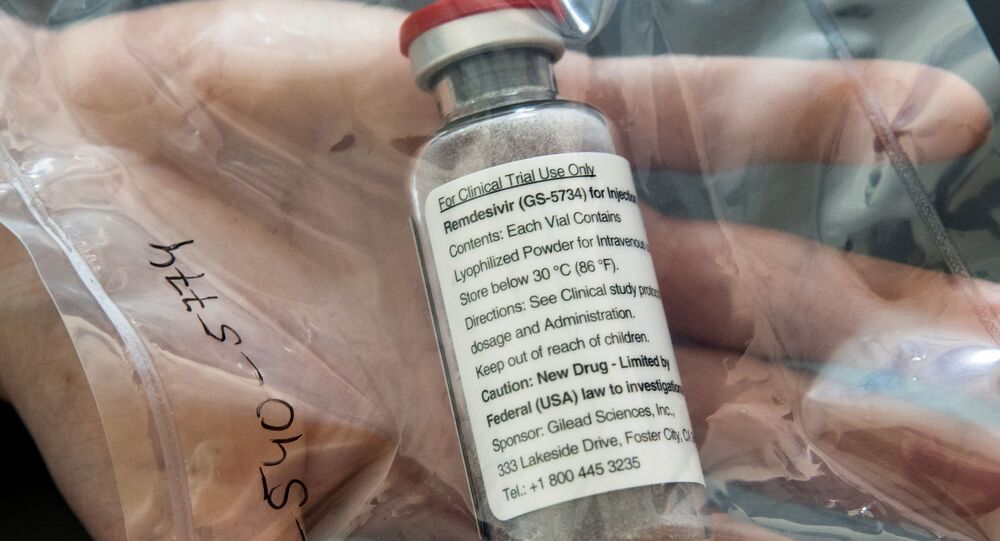 New Delhi (Sputnik): As the whole world is hit by the COVID-19 pandemic, scientists in different countries are working at their level to find a cure for it. Days after the anti-malarial drug hydroxychloroquine was touted as possible remedy, the anti-viral medicine remdesivir is now being termed as a potential cure.

The Indian Health Ministry has revealed that it is looking to take forward a drug used in the treatment of Ebola - remdesivir. As per studies, remdesivir attacks those enzymes of the coronavirus that lead to its reproduction, which is why it is being suggested that it could be used for COVID-19 treatment, said Dr Raman R. Gangakhedkar, epidemiology and communicable diseases scientist and head at the country’s apex medical research body the Indian Council of Medical Research (ICMR).

Gilead Sciences, a US-based biotechnology company, makes the drug and India doesn’t have a supply yet. Dr Gangakhedkar said: “ICMR is making clinical trials as part of WHO’s solidarity trials, one arm of which would test remdesivir but if any pharmaceutical company is making it then we would like to take it forward”.

The scientist also mentioned that the drug has been seen as effective in some of the observational studies; however, there are no clinical experiments. A report published in the New England Journal of Medicine says that the conditions of two out of three patients had improved after they were given the drug.

“If somebody was on ventilation, they did not need it after they were given the dose and if somebody needed oxygen, their need for the same reduced after taking the medicine”, the scientist said, while quoting the study on the drug which worked on patients with severe symptoms.

Remdesivir was also used in the treatment of Nipah.

Currently, several drugs are under trial phases for the treatment of COVID-19. A virologist at Amit University, Dr Narayan Rishi, has revealed that besides remdesivir, other existing drugs under trial across the globe are lopinavir and ritonavir, which were earlier given in combination for HIV.

Another drug, ivermectin, which has been approved by US Food and Drug Administration for COVID, was earlier used for HIV-1, West Nile, and Influenza.

Recent drugs being developed for COVID-19, which are under trial, include leronlimab, for the early and middle stages of the disease, and favipiravir, also called avigan, the virologist added.

Earlier, US President Donald Trump termed the anti-malaria drug hydroxychloroquine as a game-changer following studies in China and France, but its efficacy is yet being ascertained.