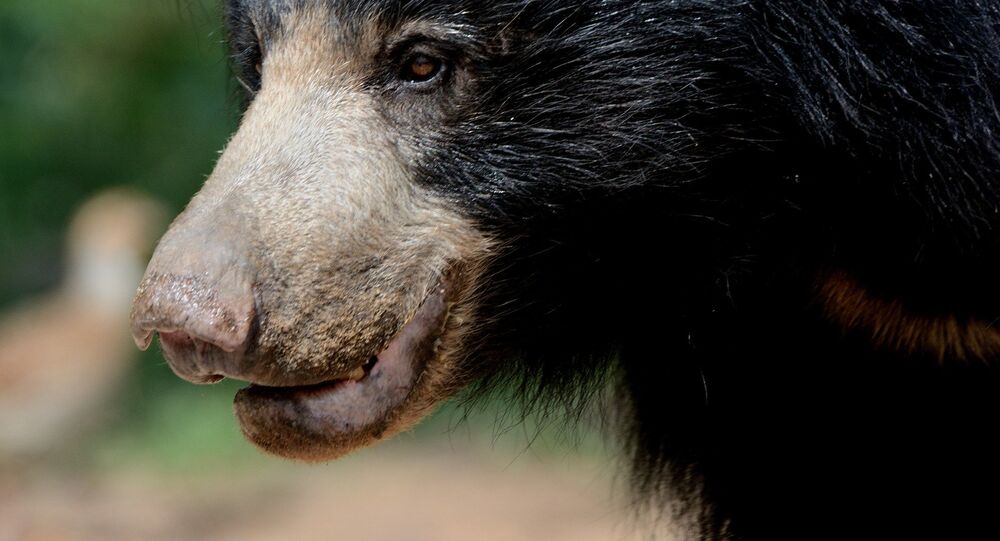 New Delhi (Sputnik): Now that India is under a nationwide lockdown to prevent the spread of the novel coronavirus, stories of several animals wandering on deserted city roads have made headlines. Many of these animals – accustomed to daily treats – have found their ways into cities looking for food.

On Monday, a video emerged showing a black sloth bear loitering around inside a temple's premises in central India’s Chhattisgarh state. From what is visible in the clip, the bear looked like it was on a scavenger hunt, raiding dustbins for leftover food.

Upon failing to find any food, the bear tossed away the dustbin in human-like anger and disappointment.

Video from Chattisgarh
As temples are closed . Sloth bear dependent on prasad & food stuff given by devotees are now angry and looking for it in dustbin around temples. @pradeepifsmp@RandeepHooda @deespeak @minting99 @anilkumble1074 @BittuSahgal @ pic.twitter.com/qE9Z92kcv7

​In India, devotees visiting temples bring lots of food to first offer the deities and then distribute the blessed food among other believers, hungry beggars, and stray animals roaming in the temple vicinity.

Some temples, which are built near mountains and forests – away from the hustle and bustle of the city, attract wild animals who find their way there for little snacks and treats from the visitors.

Now, because of the lockdown, nobody is showing up in the temples and all these animals, accustomed to being fed, are in hunger.

Netizens who came across the video advised authorities to arrange for some food for the animals in the temple area.

Local authorities should arrange foods for them

​An officer in the Indian Forest Services, Pradeep Mishra commented on the video and informed people that sloth bears are ferocious in nature. In 2018, a bear was captured chasing residents of the Sarangarh district of Chhatisgarh itself, and ended up injuring four locals.

​The lockdown and deserted city areas of India have left socially-accustomed animals confused, hungry, and restless.

From monkeys to leopards and deer, lots of jungle residents have been captured wandering in the streets of urban Indian areas looking for their human buddies in the recent days.

Chandigarh: A leopard has entered a house in Sector 5. A team of Wildlife Department has been called to rescue it. The operation is still underway. More details awaited. pic.twitter.com/3HgkENdRkM PMOIndia #xenoh

#IndiaFightsCorona & people are staying at home, for some it’s difficult, for some its fun. Look at these monkeys enjoy swimming 🤣 pic.twitter.com/uKbBCZSodM

​The coronavirus, which was declared a pandemic by the World Health Organisation last month, has infected over 1.8 million people globally and resulted in the deaths of over 114,000 patients, real time statistics platform Worldometer notes.

In India, a total of 9,152 positive COVID-19 cases have been recorded, along with 308 deaths according to the federal Ministry of Health and Family Welfare.

As a precaution against the further spread of the coronavirus in India, Prime Minister Narendra Modi announced a 21-day nationwide lockdown on 25 March.