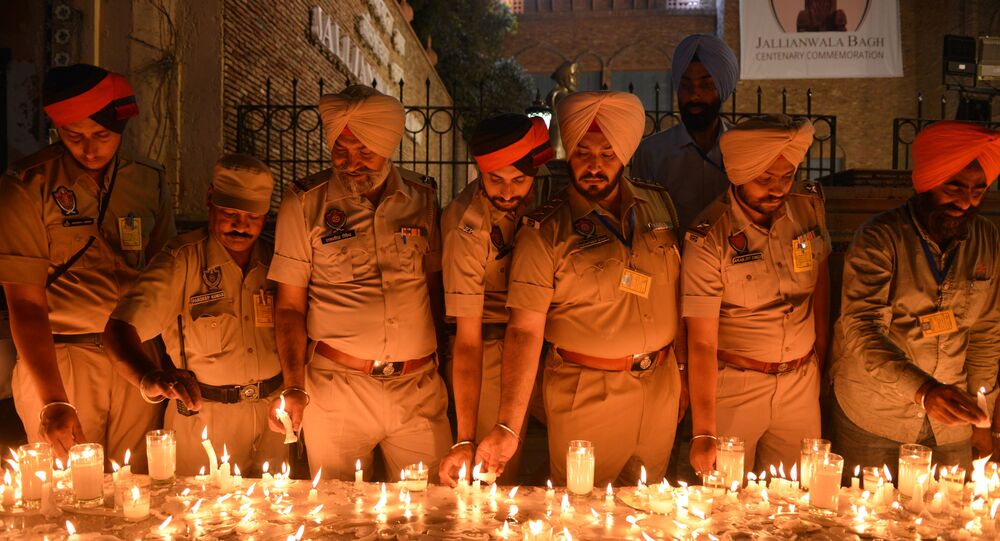 New Delhi (Sputnik): Today India is observing the 101st anniversary of a gory incident in its pre-independence history, remembering hundreds of people belonging to the Sikh community who were fired upon indiscriminately on instructions of a British general. Although the UK has expressed regret for it, it has always fallen short of a formal apology.

It would be emotionally overwhelming if one takes a walk inside the Jallianwala Bagh memorial in India’s Amritsar city, where hedges in lawns are moulded in the form of armed soldiers; where the walls still bear the marks of bullets and well preserved is the well into which people jumped in a desperate bid to escape the firing.

On 13 April 1919, the colonial British opened indiscriminate fire on unarmed Sikhs who had gathered near the Golden Temple in Amritsar city for a peaceful protest. The firing was carried out on the orders of British General Reginald Dyer. While most subsequent British prime ministers have visited the memorial and paid their respect, India is still waiting a formal apology.

Neerja Singh, associate history professor, Delhi University, told Sputnik: “This a typical characteristic of imperialism that they have to defend. They (British colonisers) projected themselves as carriers of liberal ideology. If they have to justify their theory of White Man’s Burden, it (apology) wouldn’t fit into their design of imperialism. This comes in their way of formally condemning the incident because if they do, it would mean condemning imperialism”.

In 2013, then British PM David Cameron laid a wreath at the memorial and called the event “deeply shameful” and later defended his decision not to issue an apology.

“I don’t think the right thing is to reach back into history and to seek out things that we should apologise for”, Cameron said. In 2019, then Prime Minister Theresa May expressed her “deep regret” over in the “shameful scar on British Indian history” in British Parliament.

On the 101st anniversary of the massacre, Indian Prime Minister Narendra Modi took to Twitter and said: “I bow to those martyrs who were killed mercilessly in Jallianwala Bagh on this day. We will never forget their courage and sacrifice. Their valour will inspire Indians for the years to come”.

As the issue remains sensitive to India, Neerja says it’s a part of people’s historical memory and cannot be cast away or diluted.

“When such anniversaries are observed and the incident remembered, it is more of an emotional experience for people than political. As a century has passed, I think it's more and more deeply embedded in our memory. Not only the Sikh community but it’s a memory for larger Indian community”, the professor said.

According to records, Brigadier Dyer justified his action by stating that the crowd had gathered at Jallianwala Bagh in Punjab in an “open rebellion against the crown” and was armed.

On being asked if General Dyer could alone be blamed for the incident, Neerja said that although he was part of a system, that same system was experimenting with liberalism and boasted of democratic ideals.

“How could he? The way he behaved was part of the brutal, imperialistic system that motivated his actions. He wasn’t regretful of it as he said if had more bullets he would have continued shooting”, the professor explained.

Nearly 10,000 people had gathered at Jallianwala Bagh in the afternoon of 13 April 1919 to protest against the arrest of two national leaders by the British. General Reginald Dyer had issued orders prohibiting any form of gathering in Amritsar city.

However, men, women, and children, who were said to have been unaware of the orders in place, had gathered at the site to take part in the protest. They are thought to have been trapped by the British at the site and subjected to unprovoked incessant firing for 10 minutes.