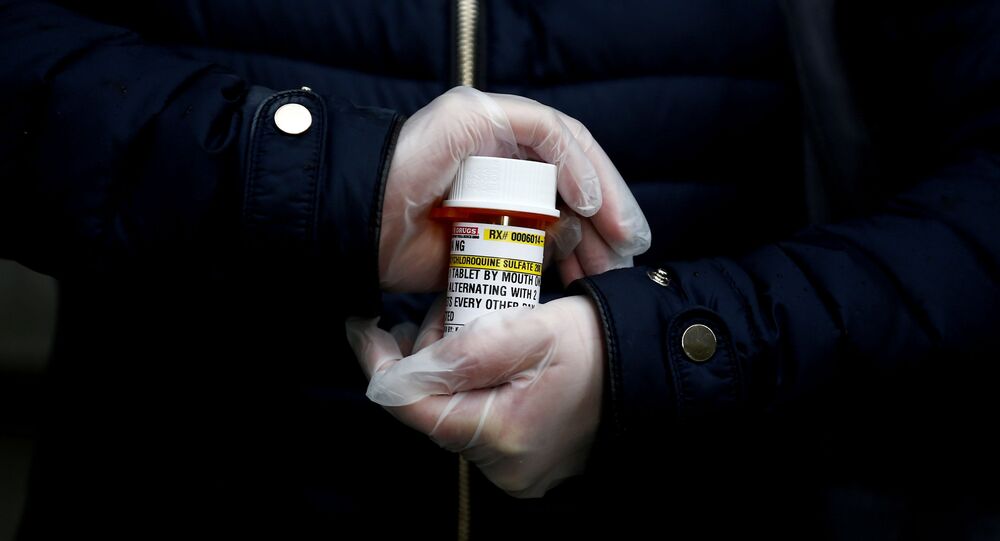 India Clears First Set of Hydroxychloroquine Tablets for 13 Countries, Including US - Sources

New Delhi (Sputnik): Last week, as many as 30 countries, including the US, approached India for a supply of hydroxychloroquine, an anti-malaria drug. Earlier, the export of the drug had been banned by India but following Trump’s threats of economic retaliation, the ban was lifted.

India has cleared its first list of 13 countries, including the US for a supply of hydroxychloroquine (HCQ), a few days after lifting a ban on its export, according to sources in Indian External Affairs Ministry. The country has also released 13.5 million tablets of Active Pharmaceutical Ingredient (API).

The 13 countries are the US, Spain, Germany, Bahrain, Brazil, Nepal, Bhutan, Afghanistan, the Maldives, Bangladesh, the Seychelles, Mauritius and the Dominican Republic.

“We are in the process of providing humanitarian aid in the form of pharmaceutical and other items, including HCQ & paracetamol, to SAARC countries and to Mauritius and Seychelles. We would also be providing these items as humanitarian aid to some countries in Africa and Latin America,” sources in the Indian Ministry of External Affairs said.

“We are processing requests for medicines from other countries based on availability. These would be supplied on commercial basis,” the sources added.

Thank you government of India, for approving Maldives’ request for Hydroxychloroquine, which is being called a game changer in the fight against #Covid19. A friend in need is truly a friend indeed! @narendramodi @DrSJaishankar@MEAIndia

Brazil will receive 0.53 MT API in the first consignment and Canada is expected to get 5 million tablets of hydroxychloroquine in a second consignment.

On Tuesday, India lifted a ban on the export of the anti-malarial drug after receiving requests from over 30 countries to purchase a supply. US President Donald Trump has claimed that the drug can be a game changer in slowing the spread of the COVID-19 pandemic, following independent studies in France and China.

India claims that it has enough of the drug to serve its own population. The nation's Health and Family Welfare Ministry said on Friday that India has a stock of 328 million hydroxychloroquine tablets, while the projected requirement until the end of April is 160 million.