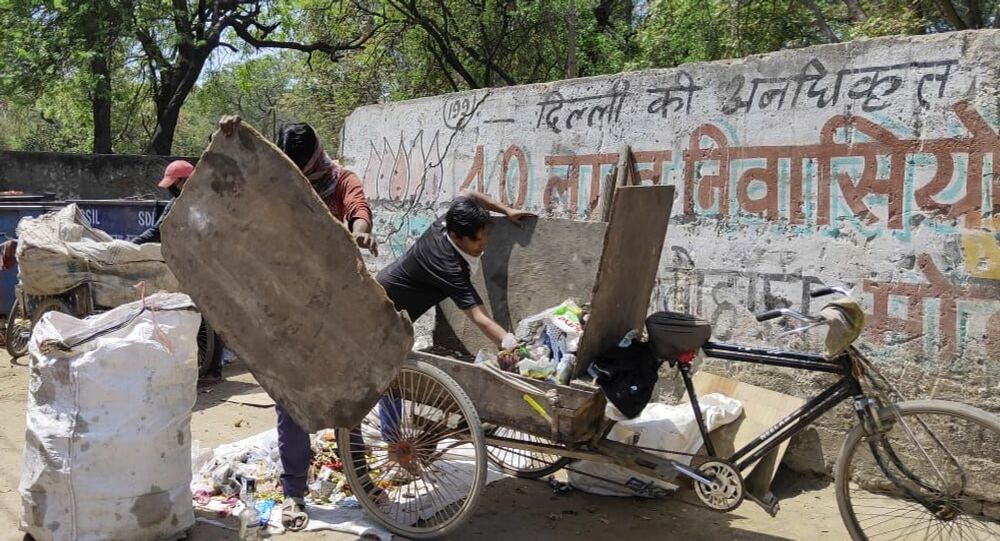 New Delhi (Sputnik): Prime Minister Narendra Modi’s campaign against COVID-19 draws strength from the thousands of sanitation workers. And while Indian society that has shunned them for years - most of them belong to the lower caste and do menial jobs - the now want to claim their rights.

India is locked down in a bid to break the cycle of COVID-19 spread, but a large number of workers are still sanitising cities and towns. The workers in the frontline against COVID-19 tend to be badly paid and don't have the usual service benefits enjoyed by regular employees.

While their services were recognised by the Modi in a televised address to the nation on 19 March, they have not been offered any special protection by the government.

“We don’t get our salaries on time. We take so much risk venturing out every day, yet when we take leaves, our salaries are cut,” said a sanitation worker unloading a pile of trash from his vehicle.

Working out on field and risking thier lives during Covid-19, #sanitationworkers in #Delhi share their plight. #CoronavirusOutbreak #coronavirusindia

The coronavirus crisis highlights the plight of sanitation workers who have been hired as casual workers, but are deprived of any benefits of regular jobs.

They face uncertainty in job and wages, as they are contracted by service providers of the government. While government employees enjoy the benefits of leave, medical assistance, these sanitation workers have no such perks. It’s difficult for a casual sanitation worker even to claim compensation in case a worker dies while performing his duty.

“We are protecting the public right now and we ourselves do not have protective gears. No one has even taken stock of our situation yet or asked if he have masks and gloves,” said another worker do did not wish to be named.

Similarly, a public health department for malaria, which currently undertakes the sanitisation of public spaces to contain the spread of coronavirus, does not have enough personal protection equipment.

Employees of public health department of Malaria, currently undertaking sanitisation for coronavirus, share how they are fighting this crisis and how can the government support them better.#noprotectivegears #FrontLineHeroes #CoronavirusOutbreak pic.twitter.com/R3OO9OBHFq

​“Policies and monetary compensations have been rolled out for permanent government employees, but nothing specific for contractual employees even when they face greater risk. We want similar policies for us,” said Jai Bhawan Sharma, Assistant Malaria Inspector, a contractual employee.

The workers also face caste discrimination, as a sizeable number of them belongs to Dalits - people belonging to the lowest strata of the Indian caste-system.

The government announced an insurance scheme of INR 50 lakh ($65,785) for frontline health workers, which includes sanitation workers after the outbreak of COVID-19. But it is not clear if contractual and casual workers would be eligible for its benefits.

India's Federal government enacted the Unorganised Workers Social Security Act, 2008, which includes sanitation workers. It stipulates devising policies by both the federal and state governments on disability cover, health and maternity benefits and old age protection to workers including sanitation workers. But the legislation is still not implemented on the ground.

Need Of The Hour

“The contractual sanitation workers should be given all the benefits which are extended to the permanent sanitation workers as both of them are exposed with the same level of risk and so there should not be any discriminations, if any.”

Prakash said, though there are legislation for the welfare of contractual workers, their employers often flout the rules to avoid paying up higher wages and other benefits to them.

According to the Contract Labour (Regulation and Abolition) Act, 1970, employers cannot hire labour on a regular employment basis for jobs that are perennial in nature.

Talking about the shortage of PPEs for these workers, Prakash said, “The government cannot do this alone. They should give a call for individuals and organisations to come forward and help them in spreading the awareness and distribution of PPE kits.”

India currently has 6039 active cases of COVID-19 had 206 deaths, according to the federal Health and Family Welfare Ministry.