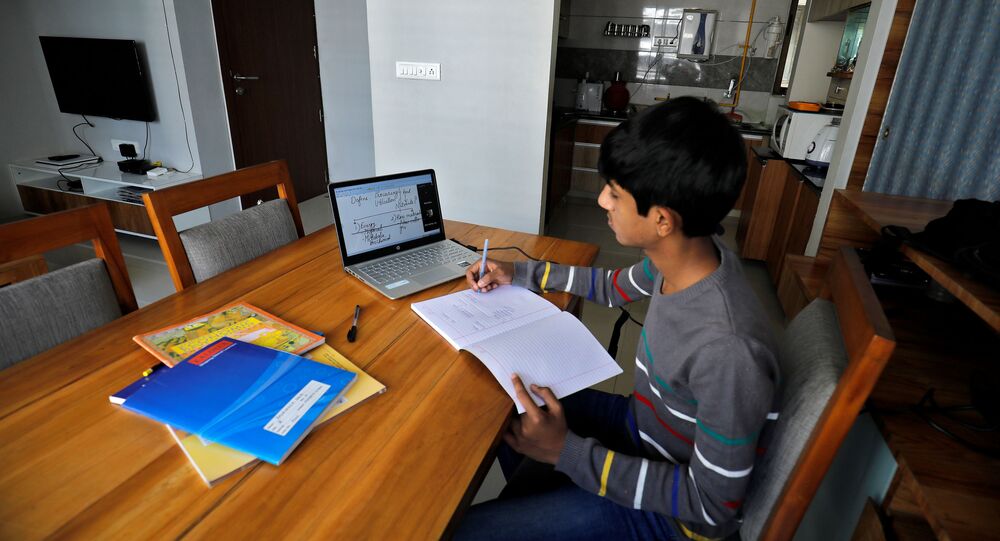 New Delhi (Sputnik): Schools in India were shut down even before the 21-day lockdown announced by Indian Prime Minister Narendra Modi, which came into effect on 25 March. The education sector, like many others, is also bearing the brunt of the shutdown. To keep up with the syllabus, schools have now devised an innovative strategy – online classes.

A section of parents who are not very tech-savvy were left utterly confused just as the school dropped the notification that they were introducing online classes for their wards amid national lockdown curbs in the country. Most of these parents were bewildered over how to get past the technology barrier.

Take the example of a nine-year-old, who studies in fifth grade at a Delhi convent school, who ran from pillar to post to urgently get a WiFi connection at home. His parents had to seek help from the “tech-friendly youngsters” to learn how to use it. After a struggle that went on for two or three days, they could finally avail the classes.

“A membership ID and pin that we received in notification meant just numbers to me. Though they gave use step-wise guide, I am not very fluent with English. My daughter tried but she couldn’t help, nor could her father”, said Renu, mother of the nine-year-old.

A teacher, who has been catering to primary classes in a private school in Madhya Pradesh state, said she was flooded with queries and had to spend nearly a week teaching parents struggling with the technicalities of the apps that are now being used to conduct online classes.

“Initially, parents had real trouble in logging in the app, navigating their way through the app to avail the classes. These parents come from wide range of societal hierarchies. Situation was tougher for those coming from low-income background and suffered financial crisis”, said a teacher, who did not wish to be named.

Although India saw a digital tech boom in 2016, with the country overtaking the United States to emerge as the second-largest smartphone manufacturer after China. But with 299.24 million mobile users in India, why are parents facing this tech challenge?

Ashutosh Kumar, founder, EdTech start-up Testbook.com, opined that it's due to a lack of awareness.

“Parents belonging to the low-income group are not much aware with the nuances of this product (online solution). Same is true with the people who have come from the rural parts of the India”, Ashutosh said.

However, he points out that the coronavirus crisis is making India move towards tech-based solutions. “Earlier, people had some or the other excuse over not shifting to online classes, but now they are somehow getting acquainted to online learning platforms”.

Priyanka Puri, a parent, said teachers are going out of their way to help the students and she has been receiving full support during this difficult time from the faculty.

“Teachers are even spending time beyond their capacity to help students and sending the pictures of textbooks to keep up with the syllabus. I see it as an opportunity to learn something new”, she said.

Meanwhile, the Indian education sector is also under severe strain, as classes have been suspended and most of the country's states have decided to promote students of specific classes without examinations.

According to the latest information, India has 1.5 million schools with 260 million students. The school system, which is considered the second largest after China, has come to halt during the 21-day lockdown.

India currently has 4,714 active coronavirus cases in the country and has witnessed 149 deaths. India has seen a massive jump in cases, with 773 cases having been reported since Tuesday, fuelling speculations that the ongoing lockdown may be extended further.