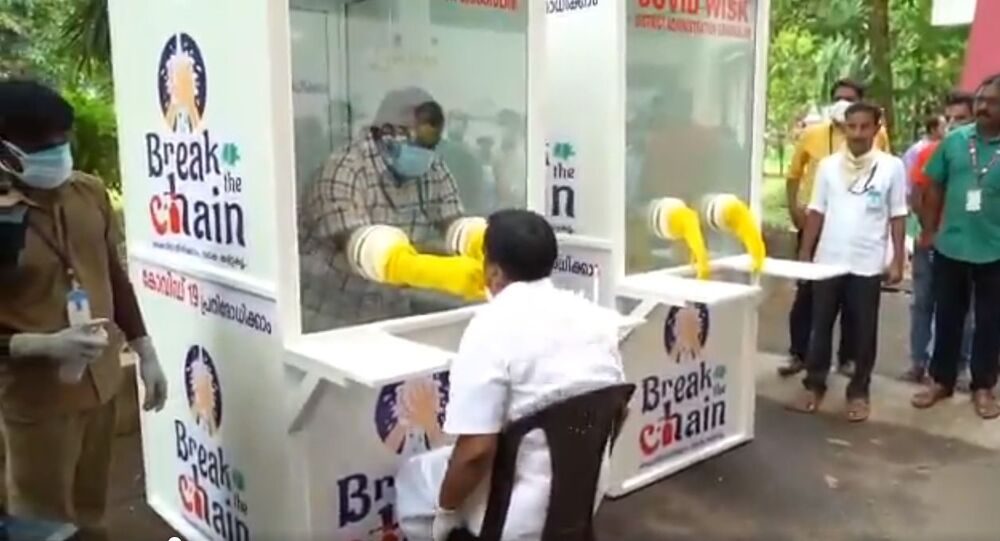 New Delhi (Sputnik): The number of positive COVID-19 cases in India recently crossed the 4,000 mark as the coronavirus tightens its grip on the nation. Both federal and state governments have been coming up with measures to contain the spread of the virus and prevent the country from slipping into stage three of community transmission.

With increasing cases of doctors and health workers contracting the coronavirus, the southern Indian state of Kerala has come up with a solution inspired by South Korea – India’s First walk-in sample collection kiosk.

South Korea has set an example to efficiently handle the crisis and of containing the spread of COVID-19.

The kiosk set up in the state's Ernakulam district, allows workers to maintain minimum contact with suspected COVID-19 cases and work behind a protective shield while taking throat swabs.

The kiosk was developed on the advice of district medical officers and a team of doctors at the Government Medical College in the district. The district collector S. Suhas had told the media that the kiosk doesn’t require health workers to use Personal Protective Equipments and would be significant in case of community spread by providing quick and frequent sample testing.

The innovation comes in the wake of several healthcare workers complaining about a shortage of PPEs and contracting the virus. Even hospitals were being declared containment zones with several doctors and nurses getting infected.

India's federal  Health Minister Harsh Vardhan has maintained that N95 masks and PPEs were not available in adequate quantities in country. At the same time, India on Monday (6 April) received PPEs donated by China.

Kerala currently has 327 confirmed COVID-19 cases and remains one of the worst-hit states in India. On the other hand, the state also has highest the recovery and lowest mortality rate. Nearly 85 percent people who tested positive between 9-20 March recovered. The overall rate of recovery in the state remains 17 percent.

According to the federal Health Ministry, the total number of positive cases in the country as of Tuesday was 4,281, while 111 people have lost their lives and 319 have recovered.

COVID-19: Blessing in Disguise For India's Political Parties as They Deploy Workers on Ground?