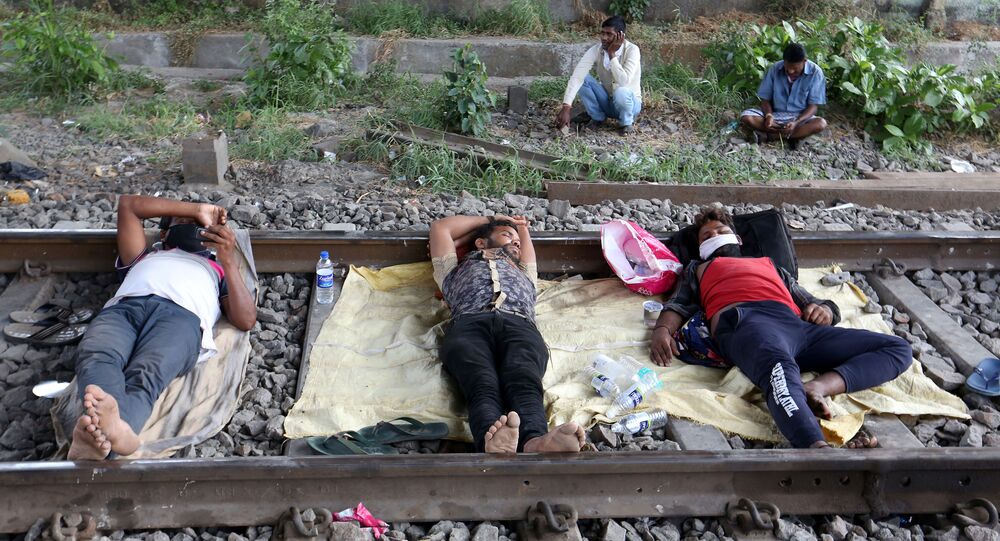 New Delhi (Sputnik): The role of India's media amid the COVID-19 crisis has gained immense importance, given that the Prime Minister held a video conference with the nation's major news publishers to emphasise their role during this critical time, when reliable and authentic information is required to prevent a panic.

K.G. Suresh, former Director General of the Indian Institute of Mass Communication, believes that the media should engage in constructive criticism and improve things in a time of crisis, not exacerbate them.

“This is a war (against COVID-19) in which we cannot ostracise one community," Suresh told Sputnik.

What took the mainstream Indian media by storm was a sharp increase in COVID-19 cases after the Islamic missionary group Tablighi Jamaat organised an event in Delhi in mid-March where over 1,800 people from 41 countries gathered. Later, some of them tested positive for the disease.

The direct impact of the event on the spread of coronavirus is evident from the fact that out of the total number of cases in the country, more than one third can be traced to it directly..

The incident has also triggered voracious and bitter debates on television, which relay the perception that the nation's Muslim community is solely responsible for the spread of COVID-19 in India, which was under control until the last week of March.

“Something that has happened must be talked about. But a balancing act on the part of the media was also required, to state that Tablighi Jamaat is not the representative of the entire (Muslim) community,” Suresh said.

Suresh emphasised that there are voices within the community condemning the incident and the media should have highlighted those rather than giving proportional coverage to fundamentalist fringe elements when they were defending the Tablighi Jamaat.

In the end of March, Prime Minister Narendra Modi held a video conferencing discussion with the heads of various electronic and print media groups and appealed them to counter “pessimism and panic with positive communication”.

“There is a huge population out there which is staring at a very uncertain future and it should not be made more depressing,” Suresh said, emphasising that positive reporting doesn’t mean not highlighting the shortcomings of the state and federal government.

Regional Media, a publisher that is popular in Kerala and elsewhere in southern India, has been lauded for taking a more balanced approach while reporting on the COVID-19 crisis.

Ajith Kumar, former member of Press Council of India, told Sputnik: “Kerala media, both print and electronic, has played a very positive role along with the government. Although there has been some distortion, by and large it has been a positive role.”

The initial cases of coronavirus in the country were discovered in the southern state of Kerala, which were dealt with efficiently, in a way that prevented it from spreading further. But with the start of the country-wide spread in late February, the State has again found itself in the grip of the infection.

When asked if Kerala has seen a transition from constructive reporting to community gossip after the Tablighi jamaat incident, Ajith, Chief of Bureau in New Delhi of Malayalam daily Mathrubhoomi, said, “There was a sudden spike in COVID-19 cases countrywide and in Kerala due to the Nizamuddin Dargah (Tablighi Jamaat) gathering, but despite that the chief minister of the state (Pinarayi Vijayan) gave issued stern warning to general public and media not to make it communal.”

Kerala currently has 286 COVID-19 cases; nearly 157 people from the state had attended the Tablighi Jamaat gathering in Delhi and have been quarantined, State chief Vijayan stated.

Talking about the spread of fake news and the situation now turning into a pandemic, Ajith stated that the regional media’s role has only become more serious. “We do not go beyond reporting the scientific and serious claims that are made by the government."

Meanwhile on 1 April, the Modi government also reached out to the country’s Supreme Court, asking it to direct Indian media outlets to not print, publish or telecast coronavirus information without ascertaining facts from official agencies.

While the top court refrained from passing any orders, it cautioned the media against the same in response to the government’s allegation that panic is being created by misleading news and social media.

So far, the Modi government has not formulated guidelines for the media coverage of COVID-19, which Suresh believes is ideally not the job of the federal government.

“If a government comes out with such guidelines on media coverage, it is widely viewed as breach of freedom of expression. Therefore, the industry on its own should have been responsible and proactive in rolling out institutional level guidelines regarding the coverage,” he said.

The Committee to Protect Journalists, or CPJ, an international media organisation, has come out with guidelines for journalists stipulating the norms for avoiding the spreading of misinformation and also informing them about how to protect themselves from infection while on duty.

India currently has 2,088 active cases of coronavirus and has reported 58 deaths so far. The country has been placed under a 21-day complete lockdown by Prime Minister Modi, which came into effect on 25 March.