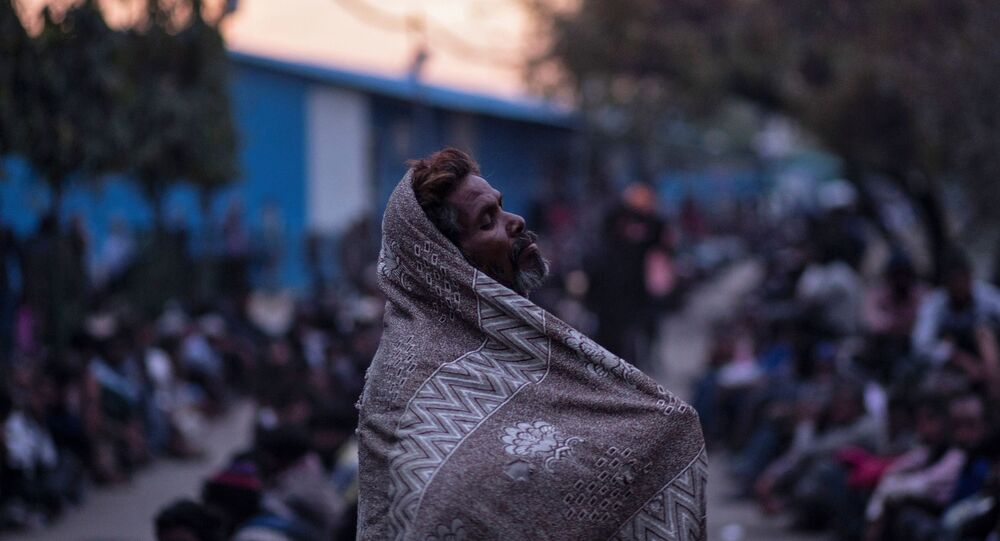 Volunteers Save Thousands on Indian Streets from Starvation during Lockdown

New Delhi (Sputnik): The sudden lockdown announced by Indian Prime Minister Narendra Modi which began at midnight on 24 March to arrest the spread of the COVID-19 infection has left thousands of homeless people on the streets and daily wage-earners with no source of income.

As starvation threatens thousands of street dwellers and migrant labourers in the Indian capital, several volunteer organisations have come forward to complement efforts by the state government to feed them through the lockdown period.

Amongst them was Sewa Bharati, which works among economically weaker segments of the population, including tribal and indigenous communities. Sewa Bharati is the community service wing of Rashtriya Swayamsewak Sangh, the ideological organisation connected with both Indian Prime Minister Narendra Modi and his ruling Bharatiya Janata Party (BJP).

Sewa Bharati set up a community kitchen in Delhi a day after Modi announced the lockdown. Presently, it feeds 30,000 people across the national capital twice a day, mostly homeless street-dwellers and migrant labourers. Rajender Singh, a functionary at Sewa Bharati who coordinates the activities of the community kitchen, told Sputnik their volunteers also reach out to anyone who was unable to go out and get his daily sustenance.

“Food is prepared hygienically by about 450 volunteers in shifts. Our aim is to feed every starving person in Delhi, as the situation demands,” he added.

There are several organisations in Delhi & all over India, which daily feeds poor & helpless people during the #Lockdown. One such is #SewaBharati, which feeds about 30,000 people twice daily. Food is prepared & packed at the kitchen of #JhandewalanTemple. #COVID 19, #Coronavirus pic.twitter.com/tAWcrcrtZZ

​All over India, the organisation distributes about 500,000 food packets every day.

Delhi's city government has also set up the capacity to feed about 400,000 people. According to Delhi Chief Arvind Kejriwal, the government was distributing food in over 400 schools and 238 night shelters.

India has faced a uniquely challenging situation; thousands of migrant workers who lost their means of livelihood with the announcement of the lockdown, have left cities like Delhi and Mumbai in hordes, trudging hundreds of kilometres to their villages.

The exodus, which defies the lockdown and social distancing norms, has become a major national issue, with the apex court of the country describing the movement of migrant workers in fear and panic as a “bigger problem than the virus”.

Since the outbreak of COVID-19 in India on 30 January, 50 people have lost their lives to infection; as of this date there are 1,965 positive cases, including 51 foreign nationals in the country.