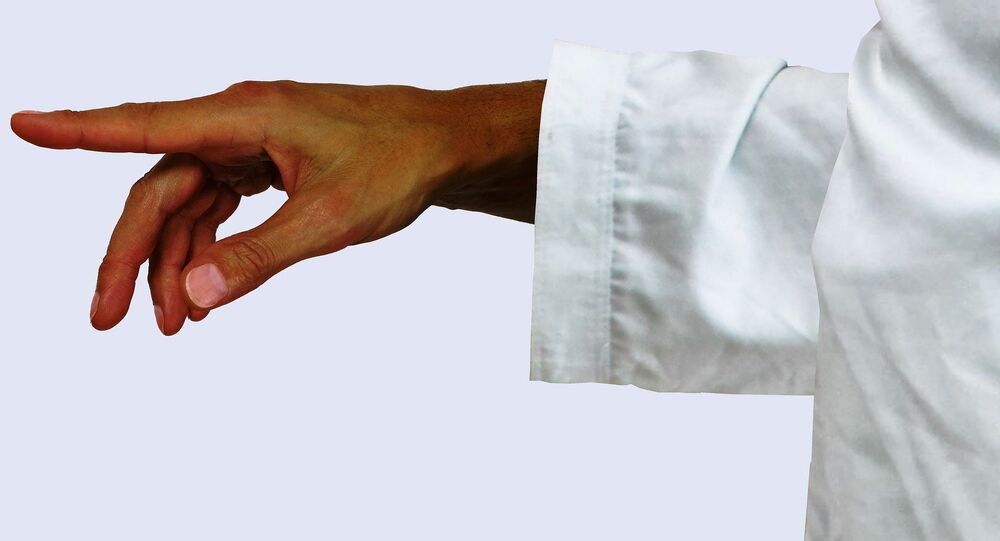 ‘We Could Not Have Been Saved’: Indian Doctors Visiting Muslim Area Attacked, Netizens Outraged

New Delhi (Sputnik): India’s federal Ministry of Health and Family Welfare notes the country has recorded 1,764 positive cases of Coronavirus (COVID-19), while the death toll has officially reached 50. As the number of cases shot up drastically in India, hundreds of infected people been discovered in New Delhi’s famous Nizamuddin area.

A video clip from the Indian city of Indore is going viral on social networking platforms, as it shows healthcare workers in masks, gloves and coats being attacked by a mob with stones in a congested region. Some can be heard abusing the medical experts.

Health care professionals assaulted and driven out of a congested locality in Madhya Pradesh's Indore.

​One of the medical staff members who was attacked by the mob in Indore has revealed that they had been on a visit to the area for the past three days, to test some people who had been recognised as attendees of the Tablighi Jamaat congregation in New Delhi.

The doctor revealed that their team of three doctors, some NGO workers and a police official were subjected to the assault.

“It was because of the police force that we came out of the area safe and sound, otherwise we would not have been saved. The stones really hit us hard, we were given the scare of our lives,” the doctor said.

The majority of the violent mob members had no masks on; the video shows some covering their faces with handkerchiefs.

In addition, despite strict instructions to practice social distancing, the clip shows people still gathering in mobs – especially when the COVID-19 outbreak is on the loose and contagious.

The video, which seems to have been recorded on Wednesday, is seeing the light of the day on Twitter on Thursday.

Infuriated netizens who are locked up in their homes to save themselves and the Indian community from the catastrophic consequences of COVID-19's spread are appealing to the police authorities for very strict action against the violence.

Deadly attack on healthcare workers & doctors in Indore when they went to a Muslim locality to treat #COVID19 infected people, some of whom had attended #TablighiJamaat.
These criminals need to mercy. Police should lock them up & leave them to their fate.pic.twitter.com/SvWKfiaI9f

India has to clean these viruses before corona. ⁦⁦@republic⁩ #coronavirus #coronajihad https://t.co/cfx7WI6VOV

Yes!
It seems India is attacked by collective suicide attack named #TablighiJamaat.
This deadly virus has spread in whole Ind.
How can the doctors chased & attacked by the muslim community in Indore? https://t.co/sreXqxYnNJ

​The attack on healthcare workers has come just days after over 2,000 Islamic devotees from around the country reached the Nizamuddin area of the national capital for a religious gathering called the “Tablighi Jamaat”.

While the attendees of this gathering are being traced and tested, several Muslims who were present at Nizamuddin have resulted positive of COVID-19.

In a bid to identify more people who were in the Nizamuddin area, medical and police officials have been visiting the Muslim-dominated areas of different Indian cities to test people for the virus.

The efforts, however, of these front liners -- whom Indians clapped and celebrated on 22 March, are being met with unwelcoming and violent attitude in central India.

Recently, a video of health care experts being spat on in Indore also began making the rounds on social media.

The Footage is recorded at Ranipur Indore where peoples are spitting on the team and not cooperating with them.
Is it the real indore ?
People should need to stand up against those insects who r spoiling the culture.#indore #corona #quarantine pic.twitter.com/lLflHj5F8Y

​At the time, Harinarayanchari Mishra, a Deputy Inspector General from the city told Sputnik that the polce was taking strict action against such violators who indulge in anti-social activities.

Indian Prime Minister Narendra Modi on 24 March announced the country going into a complete lockdown as a preventive measure against the surging impact of deadly and infectious Coronavirus disease (Covid-19).

The pandemic Coronavirus has affected 199 countries globally. Thousands of infected patients have lost their lives. Since the virus is novel, medical cure for it is being research upon by global health care experts, including from India.

As of now, over 936,000 positive COVID-19 cases have been identified by real-time statistics platform Worldometer, which has also recorded over 47,000 deaths globally since the outbreak of the virus in December 2019.