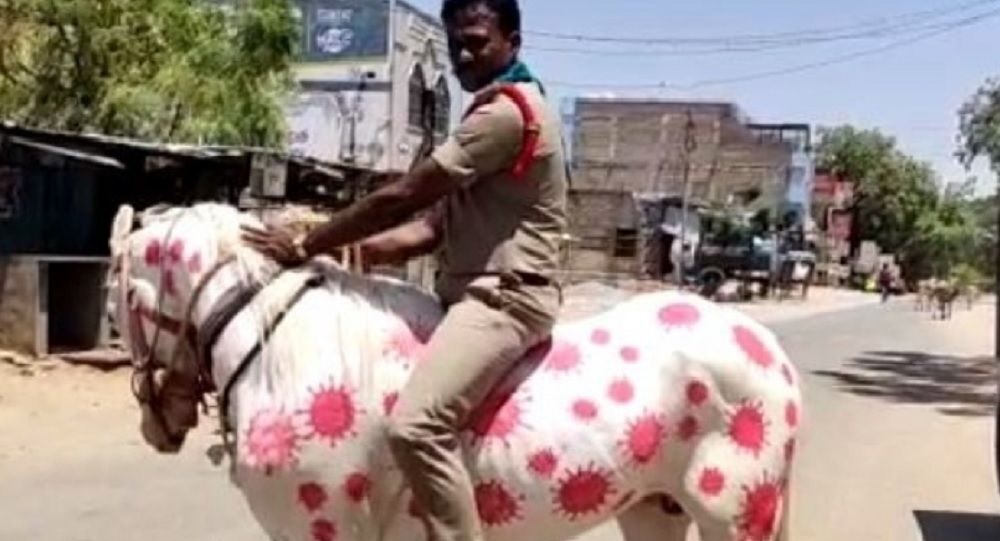 New Delhi (Sputnik): Some 1.3 billion Indians have entered the sixth day of a nationwide lockdown to contain the further spread of the coronavirus in the country. While medical professionals are on the frontlines of the war against COVID-19, security forces are engaged in enforcing the lockdown, and educating people to stay safe from infection.

Indian police, who have a reputation for using brute force, is trying to paint a different picture during the current national lockdown to break the cycle of COVID-19. Besides their mandatory responsibilities, many among them have come out with ingenious ways to spread awareness about COVID-19. On Tuesday, pictures of a police officer in the state of Andhra Pradesh riding a horse with pictures of the coronavirus painted on its body went viral.

​While people appreciated the police officer’s efforts of riding a horse under the hot sun just to make sure that people were reminded about the severity of the situation, some were upset about the animal being painted, including former federal minister from the ruling Bharatiya Janata Party, Maneka Gandhi, herself an animal welfare activist. Other netizens also pointed out that the officer named Maruti Sankar should have worn a mask before setting out preaching awareness about the infection to people.

Will the paint not harm the horse?? @Manekagandhibjp

Better if he would be wearing mask. Thats awareness.. this seems heroic.. 🙏

During the lockdown, there were also reports of policemen beating up violators, but such creative initiatives portray a different side of the force in khaki uniforms.

One viral video showed a team of masked officers offer the traditional Hindu “Aarti” to people who were out, strolling on the empty streets. “Aarti” is a Hindu religious ritual of worship, where an oil lamp is offered to one or more deities along with songs sung in praise of the deity.

#IndianCops wont beat lockdown violators because they have decided to bring sarcasm to life.

​One officer in Chennai also put on a specially designed #CoronavirusHelmet to inform lockdown violators about the importance of isolation and social distancing.

This Indian police inspector went the extra mile to inform the public about the dangers of Coronavirus.
He wore a helmet that looks like the virus to warn people to stay home.@AFP took these pictures in the Indian city of Chennai. pic.twitter.com/uQj8NxVwU6

There are currently 1,251 active cases in the country, with 32 deaths, according to the latest data released by the federal Ministry of Health and Family Welfare.