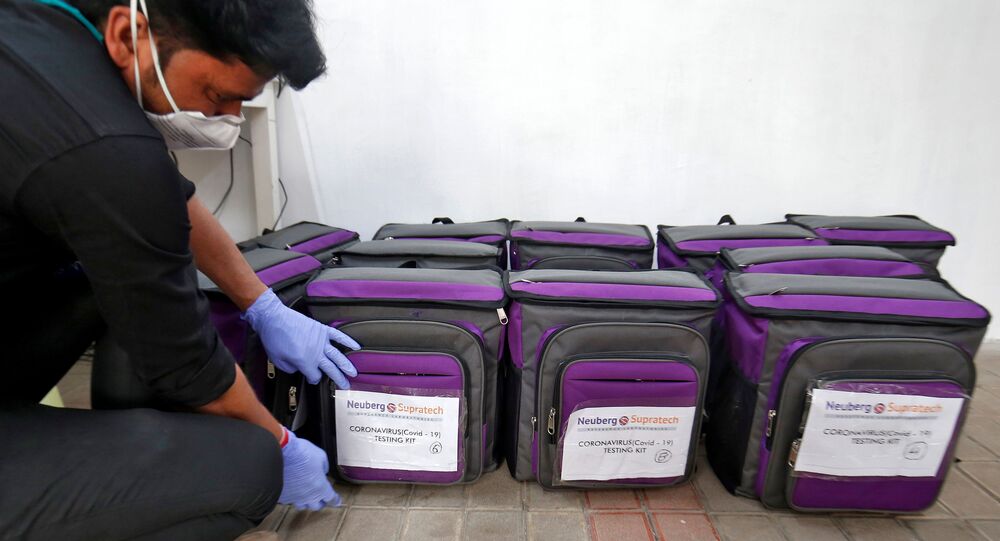 New Delhi (Sputnik): The Indian state of Bihar has recorded 15 positive cases of COVID-19 so far, while there have been 942 cases across the country. The state, which has seen one coronavirus death, is dealing with an acute shortage of test kits.

Doctors in India’s poorest state Bihar are scared for their lives amid the COVID-19 outbreak as hospitals declared as centres for treating the disease continue to face shortages of test kits and personal protection equipment.

“There isn’t enough medical equipment available here. Like the testing kits get finished in every few days, which leads to gap in testing. Everyone has received N95 masks but not the interns. Even the personal protection kits are not available for everyone. Only those who enter [the] ward with COVID-19 patients are given the hazmat suits”, Dr Shyam Kumar (name changed on request) at Nalanda Medical College Hospital (NMCH), Patna, told Sputnik.

The doctors are using #UniversalMedical kits while working at the hospital, where they are receiving patients with symptoms of #COVID19 pic.twitter.com/Oc8kyfaqxV

The Junior Doctors’ Association at Nalanda Medical College Hospital (NMCH) has written to the state health department seeking personal protection kits for staff in hospitals and even at primary health care centres.

​“We are receiving patients with symptoms of COVID19 and if the patient is positive, anyone will be infected by the time the tests come out. In such scenario, it becomes important to provide everyone with the personal protection equipment, N95 masks and gloves”, says Ravi R.K. Raman, coordinator for the Bihar Junior Doctors’ Association.

Bihar's government has declared the COVID-19 an epidemic and issued the Bihar Epidemic Diseases COVID-19 Regulation 2020, under which government officials have been given the power to conduct mass screenings of suspected patients, including forcible isolation, sealing off any geographical area, and taking punitive action against those hiding symptoms of the virus, running away from isolation centres, or spreading misinformation.

However, the shortage of testing kits has hindered the mass screening process in the state. While the doctors at NMCH have claimed that the only testing facility in the state, the Rajendra Memorial Research Institute of Medical Sciences under the Indian Council of Medical Research, runs out of test kits every few days, plans to set up another testing facility at Darbhanga Medical College and Hospital (DMCH) hang fire.

“We were going to start testing for COVID19 here at the hospital. We have the virology centre. We have labs, three to four RT-PCR and technicians who have been trained but testing hasn’t started yet because there are no kits. It’s not confirmed but it might start today”, says Dr Prakash Kumar (name changed on request) at Darbhanga Medical College and Hospital, who is also the president of the Junior Doctors’ Association.

The doctor, who also revealed a shortage of hand sanitiser at DMCH, says that Bihar had reportedly received 2,500 kits, but doesn’t know if more have been received or not.

However, a doctor at Indira Gandhi Institute of Medical Sciences Hospital, on condition of anonymity, says that while a shortage of medical equipment such as PPEs exists across India, testing is being done regularly at their hospital.

Meanwhile, doctors in Bihar are also sharing videos demanding proper personal protection kits. A video of female doctors at an emergency ward, wearing universal kits, which are not enough as a preventive measure amid the outbreak, are requesting proper kits. They are saying that they have been provided these universal kits to keep them quiet.

​The Indian Ministry of Health and Family Welfare, in its guidelines on the use of personal protective equipment, states that components of PPE are goggles, face-shields, masks, gloves, coveralls/gowns (with or without aprons), head covers, and shoe covers. It also makes it mandatory for all the health workers in hospitals to be provided with the same.

@MoHFW_INDIA in its guidelines on personal protective equipment clearly states that health workers in hospitals should be provided with the same. #COVID19 But it's not happening in @NitishKumar 's #Bihar pic.twitter.com/fUqwugj9u7

​Fearing getting infected, many interns and junior doctors at different hospitals are using plastic bags to cover them.

With hundreds of thousands of migrant labourers returning to their villages from metro cities, the risk of spread of the coronavirus is not only heightened, but also a huge potential problem for hospitals and health centres in the coming days.

“All the migrant labourers returning to their homes should have been screened before being allowed to enter the state. They pose a huge threat at a time when we don’t have adequate health infrastructure to deal with the outbreak”, says Dr Shyam at NMCH, where five out of eight ventilators haven’t been working since Bihar's last floods.

There are around 200 suspected cases and 15 confirmed ones in the state. In India, there are currently 942 positive cases of COVID-19 and 29 deaths, as per the Ministry of Health and Family Welfare.