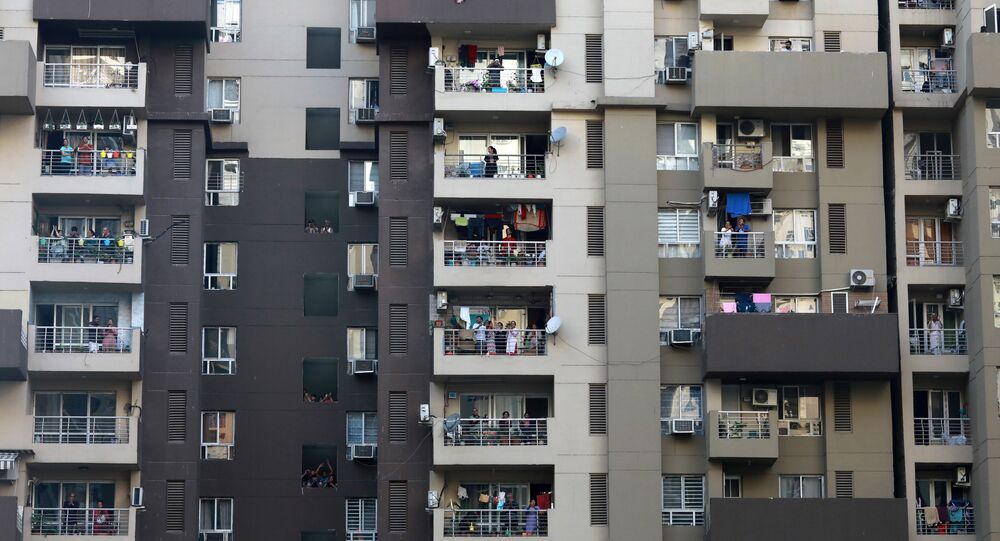 'Nobody Came Here, We Have No TVs & Phones For News': Noida Slums Cry For Aid Amid COVID-19 Lockdown

New Delhi (Sputnik): While a lot of people from the upper and middle classes of Indian society have the luxury of working from home and Instagram their fitness regimes, the 21-day national lockdown imposed to stop the spread of COVID-19 has hit the poverty-stricken poorer sections harder in many places. Noida near Delhi is one such place.

Beginning with a one-day public curfew on 22 March, Prime Minister Narendra Modi later called to halt everything except essential services, when he declared a 21-day national lockdown. It aims to safeguard Indians from the marching tentacles of the coronavirus pandemic.

Last week, the government of India rolled out a $22.36 billion economic relief package to help the poor and daily wage workers during the national lockdown because their employment status has been affected for a prolonged period.

But the situation on the ground reflects at what times seems to be the delayed or improper execution of the financial, medical, and household aid-providing plan that the government aims to implement.

An elderly lady in her 70s, Savitri Bai, lives in a crowded slum in the suburbs of Noida in the state of Uttar Pradesh, next to the national capital Delhi. She, along with nearly a hundred people comprising other residents and her family, resides in a slum behind a posh multi-storey housing society in central Noida.

“Yahan koi nahi aaya (nobody visited us to help)” echoed in the slum area, as residents told Sputnik that they were not aware of the exact situation surrounding the “coronavirus” that has jolted the country and the world.

All they know, the slum dwellers say, is that the disease kills.

Perplexed, panicked, and without masks, Savitri Bai, along with her neighbours who work as rag pickers, cobblers, and drain-cleaners, rues that their jobs have been lost amid the lockdown. She says no government aid has reached them so far.

She says kids in her locality are surviving by the alms being given by generous strangers.

"Yaha koi nahin aaya" (Nobody came here) -- their side of the story.@myogiadityanath

​The government has imposed a nationwide lockdown is to ensure people do not gather around each other in large numbers because the coronavirus is contagious and spreads rapidly from person to person.

But, in slums surrounded by garbage and zero sanitation facilities, hundreds of people without masks are living in close quarters. They are not even six feet away from each other. These people say no government officials have informed them about the severity of the situation or about any help that they are entitled to get from the government.

Bhola Ram, an elderly person in the area said that sometimes when the media comes to the area to cover the situation their residents get informed about the situation.

"Yaha koi nahin aaya" (Nobody came here) -- their side of the story.@myogiadityanath

​The starving slum dwellers living in Noida have appealed to Uttar Pradesh State Chief Yogi Adityanath to send some aid for them.

​Recently, after media extensively covered the plight of migrant workers who left for their hometowns on foot because all public transport is at a standstill amid the lockdown until 14 April, the government quickly extended aid to them.

In Noida, the District Magistrate B.N. Singh announced that for a month, all landlords who have sublet their properties to daily wage workers and migrant labourers would only be allowed to ask for rent after one month when the situation has hopefully improved.

Slum dwellers await similar quick support from the government because if this closely-knit community is not informed about the basic preventive measures and not provided with basic medical and financial aid, they could invite the virus in and cause it to spread.

The situation in slums is getting worse. If not tackled now, it could cause the explosion of #coronavirusindia in India. pic.twitter.com/GG2XX3iCy3

​According to India’s federal Ministry of Health and Family Welfare, the country currently has a total of 1,071 active COVID-19 cases along with 29 deaths.

With its 14-day life cycle, COVID-19 has also affected over 722,000 people globally and resulted in the deaths of over 33,000 patients since December 2019, according to real-time statistics platform Worldometer.

As medical experts from around the world including India are working on developing a medical cure for the virus, alumni from two premier institutes in India - the Indian Institute of Technology, Kharagpur (IIT-KGP) in West Bengal and All India Institute of Medical Sciences (AIIMS), New Delhi - have developed a device that could deactivate the life of the coronavirus using charged or ionised water droplets.

The device is capable of inducing a charge on water droplets which, in turn, kill viruses by an oxidation reaction.

The state of West Bengal has already begun deploying the device to sanitise all public places like malls, schools, transport, and other public places.