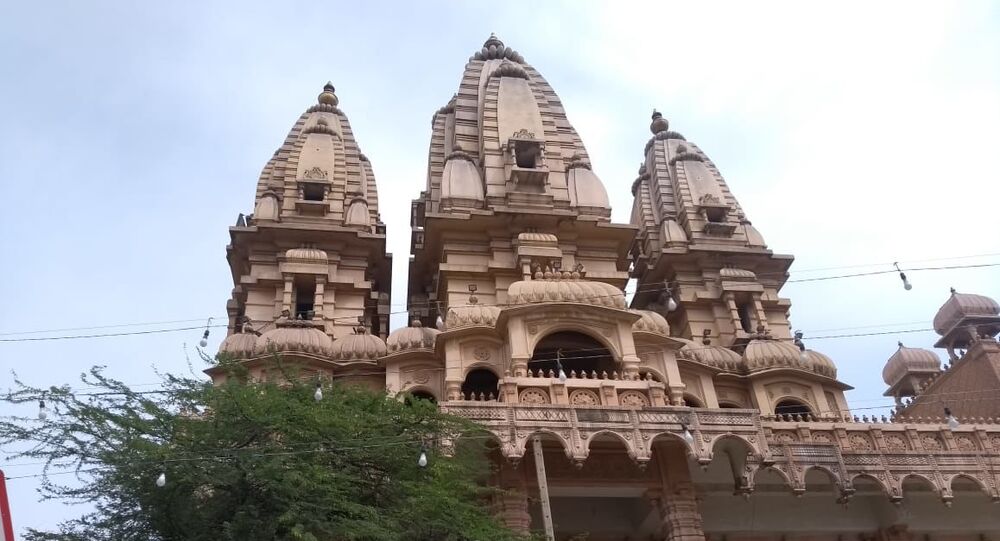 New Delhi (Sputnik): The coronavirus breakout in India and the restrictions imposed to contain it have dampened the spirits of people during the nine-day ‘Navaratri’ festival that falls during the 21-day lockdown announced by Prime Minister Modi.

Usually during this time of year, one would see people standing in long queues, rising on their toes to catch a glimpse of the deity at Delhi’s famous temple Chhattarpur Mandir, which attracts millions of devotees during the nine-day festival ‘Navratri’.

But the situation is different this year. The temple wears a deserted look with the entry gates sealed and only the daily prayers taking place in the presence of few a priests.

The video gives us a glimpse of temple's preparation to host millions of devotees from across the country during this nine-day auspicious period. pic.twitter.com/NltpWRcA50

Delhi's famous Chhattarpur temple dedicated to the Hindu Goddess Durga - personification of power - remains shut during the 'Navaratri' festival, when millions flock to the temple be a part of celebrations. #Covid19India @SputnikInt pic.twitter.com/jJ0mRIMMPi

With an end to the enthusiasm around festival and a halt on daily spiritual gathering and ceremonies, comes a halt too to the mass feeding programme organised by the temple for the devotees, especially the needy.

NK Sethi, a member of the temple’s coordination committee which organises the festival, told Sputnik “nearly 100,000 people used to avail food services provided by the temple, but keeping in mind the welfare of the people and to cooperate with the government, we have suspended these services.”

NK Sethi, organizing member of the committee that makes arrangement for the festival, said that the temple has decided to halt the celebrations to cooperate with the government in containing the spread of #Covid19India. First time in history, this temple has been shut. pic.twitter.com/9sejx2Tayz

Navaratri is a nine-day period when Hindus fast and pray to Goddess Durga, the personification of power. The temple served food in two sections - people who were fasting and those who weren't. Nearly, $9,296 was spent a day on these food services.

Neeraj Sharma, a volunteer who served food to the devotees, said: “We used to serve thousands of people every day. It used to give us pleasure with poor families turning up and eating until their bellies were full. But for the first time in history, the service provided by the temple has been suspended.”

Meanwhile, the temple stalls remained empty. The loudspeakers, which normally played devotional songs during this festival, are playing messages asking people to stay home. The celebration of other major festivals in other parts of the country, such as the mega fair organised to celebrate Lord Ram’s birthday in Uttar Pradesh were also postponed.

India has over 600 active cases of COVID-19 and 13 people have lost their lives due to the deadly infection. The whole country has been under a lockdown with only essential services operating.