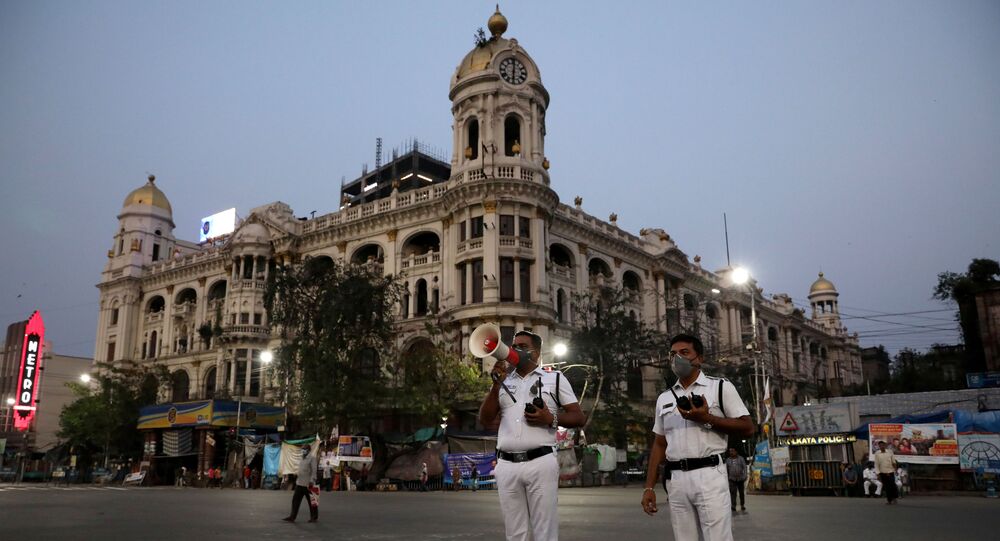 New Delhi (Sputnik): In India, the Hindu calendar, which is based on the position of planets and constellations - determines the time of traditional festivals every year, which are otherwise not marked in the popular Gregorian date-chart. One such planetary alignment marks the beginning of the year in several parts of the country.

On Wednesday, the communities of Hindus, Kashmiri Pandits and Maharashtrians marked their “New Year” just one day after Prime Minister Narendra Modi declared a strict nation-wide lockdown as a precautionary method against the further penetration of the novel Coronavirus pandemic – that originated from China in late 2019.

Every year, between February and March the Hindu community kick starts their new annual calendar with the beginning of “Chaitra Navratra” – which is a nine-day fasting and praying period dedicated to the different forms of Goddess Shakti (Power) – who is believed to be protecting mankind from all evils like a mother.

The day is celebrated as “Navreh” by Kashmiri Hindus, while Hindus in western Maharashtra celebrate it as “Gudi Padwa” and those in southern states call the festival “Ugadi” –all marking the commencement of New Year.

Prime Minister Modi greeted people, saying “these festivals (come) at a time when our nation is battling the COVID-19 menace”. “They will strengthen our resolve to overcome our circumstances. May we keep working to fight COVID-19 together,” he added.

We are celebrating various festivals across India and also the start of a New Year as per our traditional calendar.

May these auspicious occasions bring good health, happiness and prosperity in our lives.

​Isolated at homes, Indians took to social networking websites and wished each other better days.

#HappyUgadi wishes to all my friends & their families. Do stay at home & celebrate the festival 👍👍👍💐💐 pic.twitter.com/9ojZXfQmOb

Lets celebrate this GudiPadwa, Chetichand, Ugadi and Navratri by staying at home..

Right now, Health is the only thing we should have our focus on.

Heartiest greetings to everyone on Chaitra #Navratri .May Maa Durga bless all of us to contribute our utmost in fighting the #COVID19 for the welfare of the entire world. #StayAtHome pic.twitter.com/zbcf3QoiGr

​Usually at this time, the temples are flooded with devotees, who begin pouring in even before the break of the dawn. During the Navratras (nine holy eves associated with the nine forms of Goddess Shakti), Hindus around the country follow their regional traditions and start their days by bathing, going to the temple – mostly barefoot, offering water and sweets to the Goddess and then carrying on with their fasts and special meals while going on with their daily routine.

However, due to the Coronavirus scare, all temples remain closed in India to avoid the mass gathering of devotees. Only the concerned priests are performing the morning prayer rituals in their temples across India, the media has reported.

Mumbai: Aarti being performed at Mumbadevi Temple by priests and temple trustees on the first day of #ChaitraNavratri2020. The temple is closed for devotees. #21daylockdown #COVID19 pic.twitter.com/MixQPVsucx

Delhi: Jhandewalan Mandir remains closed for devotees amid #CoronavirusLockdown, on the 1st day of 'Chaitra Navratri' today. The temple authorities have put a notice board saying 'the temple will remain closed from 21 March till further notice as per the guidelines of the govt'. pic.twitter.com/jig0z18JhP

​Currently, 562 positive cases of the virus including 43 international citizens have been recorded by  the federal ministry of health and family welfare in India along with the deaths of nine patients.

Globally, the Coronavirus has infected over 422,000 people and killed nearly 19,000 patients – according to the real-time statistics platform Worldometer.

The virus – which allegedly broke loose upon the world from an unsupervised animal market for exotic meat eaters in the Chinese city of Wuhan, is known to affect the respiratory system of human beings. Scientists are currently researching a cure for the virus.