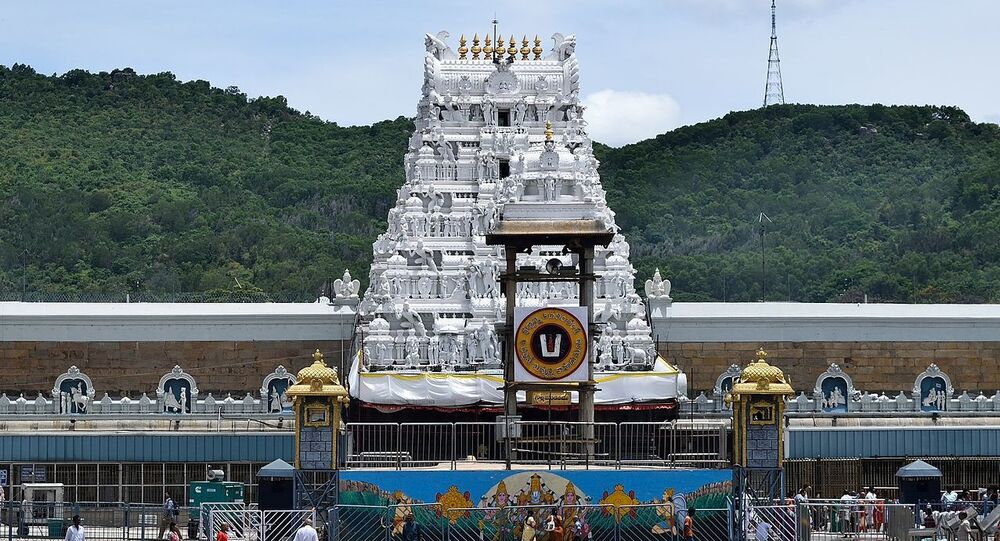 New Delhi (Sputnik): India is a country of many religions and beliefs. Legend has it that the Venkateswara Temple, located in the Tirupati region of Andhra Pradesh state, is the residence of the preserver of the world -- Lord Vishnu, the deity who would save mankind in “KalYuga” (the mythological age of vice).

Ahead of the festival of “Ugadi” – celebrated as the beginning of a new year by the southern Indian states of Andhara Pradesh, Telangana, and Karnataka, on Tuesday commenced the cleaning rituals of the gold interiors of the famous Venkateswara Temple.

In light of the current precautionary lockdown of Indian states as a preventive measure to stop the spread of Coronavirus, the prayer rituals associated with the “Ugadi” festival would be performed at the temple on Wednesday but in the presence of “very few people”, the media reported.

Tirumala Tirupati Devasthanam, the administrative body of Lord Balaji temple has conducted 'Kovil Alwar Tirumanjanam', a temple cleansing ritual ahead of festival of Ugadi tomorrow. 'Ugadi Asthanam', to be performed tomorrow in the presence of very few people. pic.twitter.com/LHMJi5wOOt

​The news comes at a time, the Government of India has strictly advised citizens to stay indoors to avoid getting infected by the Coronavirus – which is believed to have originated in China's Wuhan city last December. Since the virus is novel, not much is known about its severity and ways of treatment. It has infected over 382,000 people globally, leading to the death of over 16,000 patients worldwide, according to real-time statistics platform Worldometer.

In India, all public transportation along with public places like temples, gyms, schools, offices and colleges have been shut.

Recently, Prime Minister Narendra Modi addressed the nation on national television and as a gesture of appreciation, he urged the people to clap for health care workers who are working day and night to tackle the critical situation.

The nation-wide applause on 22 March was followed by mobs marching on streets in India, clapping and rejoicing – which totally nullified the country-wide lockdown orders.

Videos of mass gatherings flooded social media, which were heavily criticised by 'sensible' Indians who are staying indoors.

India being one of the most populated country after China, we are in such a pathetic stage. It’s high time we do what we are asked to do. Why is it so hard for us to just OBEY. #StayAtHomeSaveLives #COVIDIDIOTS #LockdownNow

Totally agree!! & such #COVIDIDIOTS should make all their so important calls staying at home. In such cases absolutely #NoTolerance policy the police should adopt. May be we need more of a #ClampDown #StayAtHomeSaveLives #India #IndiaComeTogether #CoronaWarriors @rama_rajeswari https://t.co/W9UZQbbZ2Q

​Currently, the Coronavirus, which poses serious health threats to the respiratory system of humans, has infected 492 people in India and led to the death of 10 people, the Ministry of Health and Family Welfare has noted.