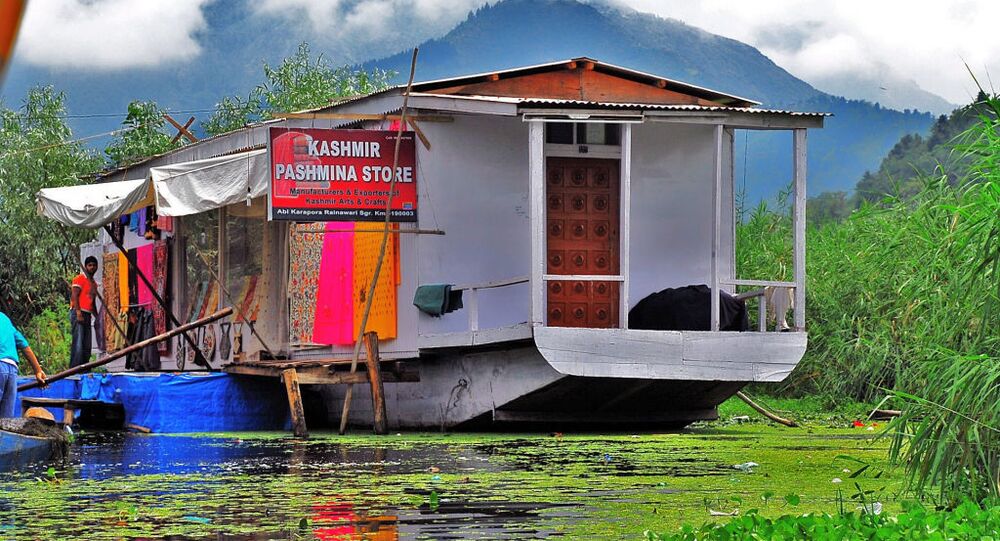 Makers of Luxury Pashmina Shawls Struggle to Survive in Kashmir

Buyers who used to order hand made Pashmina shawls have got machines and are now producing the luxury apparel using them, while “artisans like us are suffering”, says Tariq Ahmed Zaz, president of the Kashmir Pashmina Karigar (Workers’) Union.

The Persian word Pashmina, literally translated as ‘made from wool’, refers to wool procured from changra goats found in the Himalayan region at the altitude of 4,000 to 5,000 meters.

Making of the Kashmiri Pashmina in traditional manner in Srinagar pic.twitter.com/sThsnMFCkK

​The value of these shawls is largely in its production process – from procuring it to the artisans combing, sorting the sheered hair, and finally selecting the fine ones to weave into scarves and shawls.

And then on the loom, for one week, every thread is woven with traditional motifs and colours with great delicacy - just to make one shawl.

However, the artisans in Kashmir are currently getting paid very little for their efforts.

Claiming that the traders with money have got power looms, Tariq says mechanised production is not the same as making original Pashmina shawls as they tend to mix nylon.

​While a handmade Pashmina shawl takes a week, machines make 30 to 40 shawls in a day.

Once considered the fabric of Maharajas (royals), who often used it for blankets, bed covers and shawls, production of Kashmiri Pashmina began over 400 years ago.

It is believed that the fabric gained popularity among Europeans in the 1700s but when France, which was the biggest buyer of Pashmina, lost the Franco-Prussian war in 1870-71, the production of the fabric came to a halt.

It came back into fashion in the late 1900s, leading to massive demand for the fabric across the world. With no power looms at that time, huge number of artisans in the Kashmir Valley made their livelihood from Pashmina shawls.

Pashmina Shawls are an important part of Kashmir’s handicrafts industry.The artisans dealing with the craft are giving up Pashmina shawl weaving as they get paid just Rs 6000 a month and find it hard to sustain on this income. pic.twitter.com/Z1OsJC3GkS

“There is a lot of demand from Gulf and to meet that demand, these traders sell the machine-made shawls. The only way to identify whether the shawl is original or not is the GI (Geographical indication) mark,” says Tariq.

Giving-up the Craft but not Without a Fight

Artisans in Srinagar’s downtown Lal Bazaar, which is considered the hub of handicrafts, are giving up the craft - but not without a fight.

There used to be about 300,000 artisans in 2010 but now fewer than 100,000 are left in the whole Valley due to low returns, the president of the Pashmina Workers’ Union says.

​In July 2019, following complaints from the artisans, Srinagar authorities issued a ban on machines for the production of Pashmina. But just months after the ban, big traders continue to make shawls in Srinagar.

​“The authorities issued a ban but there were no raids or ground checks, hence the production continues. These people take our videos while making shawls and use them to sell the machine-made product in foreign countries. We want authorities to make a massive crackdown on this ill practice of machine production. We have presented our demands to the Srinagar deputy commissioner, hopefully something will be done soon,” Tariq says.

The artisans have alleged that traders have been selling the machine-made product at the same price as that of hand-woven shawls, which is around $110 (Rs 8,000 to Rs 10,000). It is not only cheating the artisans but cheating the buyers of the luxury shawls also.

In order to protect the handicrafts industry, the Indian government has launched a nationwide campaign under the Geographical Indications Act.

A study titled Protection and Promotion of Indian Handicrafts Through Intellectual Property Rights states that the successful implementation of the Geographical Indications Protection and Handicraft Mark can ensure the protection of handicrafts, and bring “monetary gains in terms of increased sales turnover, higher prices and better profitability”.

An Ode to Kashmir: Ivanka Trump's Outfit for Rashtrapati Bhavan Dinner Was Worth $3,100