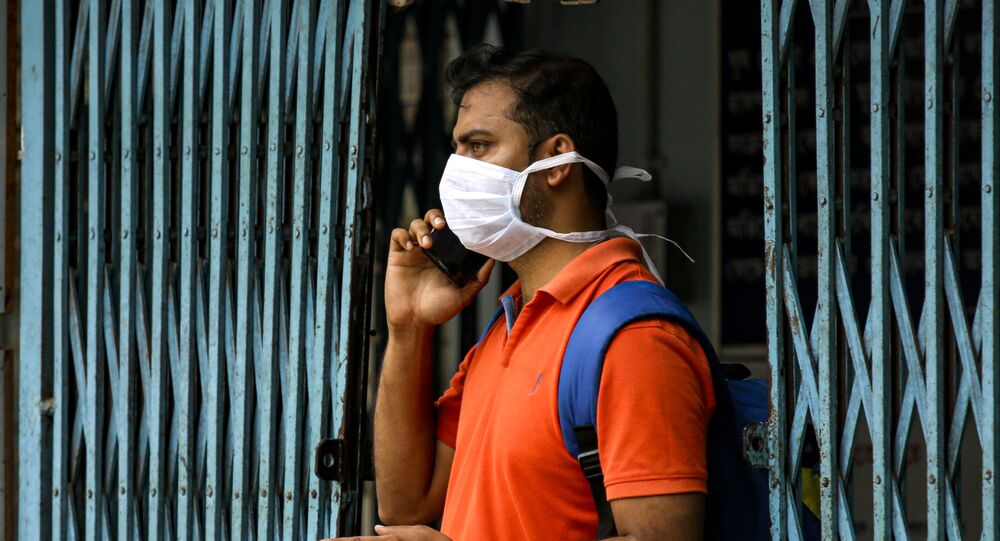 New Delhi (Sputnik): The outbreak of the Coronavirus pandemic has forced global citizens to remain at home in a bid to save them from infection. Although a sizeable portion of the workforce is now working from home, people are managing to find different and amusing ways to stay “in touch” with their acquaintances.

On Wednesday, a bunch of videos recorded in a high rise residential apartment in India's Gurugram city on the outskirts of the national capital went viral on social networking platforms. As most places of worship are shut down currently, the videos show how religious Indians have figured out a way to collectively reach out to god in this time of gloomy distress.

The videos that are rapidly being re-shared have captured residents of high-rise apartments standing out on their balconies, collectively chanting holy mantras and singing hymns to the almighty. Songs of courage in Hindi like "Hum Honge Kamyaab" (we will succeed) were also loudly sung.

The sounds of bells chiming were audible in the video. Hindus believe that ringing bells helps ward off evil and negativity from the surroundings.

Indians working from home are also taking this time to exercise and practice their hobbies.

Recently, a video from Italy, which is also locked up in quarantine, began making the rounds on social media. The video showed neighbours stepping out on their porches and singing songs from famous international pop artists like Rihanna.

In italy those in quarantine are singing rihanna's "bitch better have my money" #COVIDー19 🥺 pic.twitter.com/ERiPdvGyO7

A similar video from Barcelona showed a pianist and a saxophone player jamming out to Celine Dion's famous "My Heart Will Go On" song from the movie Titanic from their personal balconies and entertaining the neighbourhood.

A pianist in Barcelona went to his balcony during the quarantine, to play a song for the neighborhood.

A sax player in the building next door saw what was happening and joined him.

The coronavirus, which is known to attack the respiratory system of humans, has infected over 200,000 people worldwide and has caused the deaths of over 8,000 patients, real-time statistics platform Worldometer reports.

In India, 134 cases of the virus along with three deaths have been reported by the federal Ministry of Health and Family Welfare.

Offices, schools, colleges and public places in several countries including India have been shut down for the time being. Avoiding international as well as internal travel has also been suggested by global health organizations.

Gods, Devotees Abandon Each Other In Times of Quarantine, as Indian Places of Worship Close