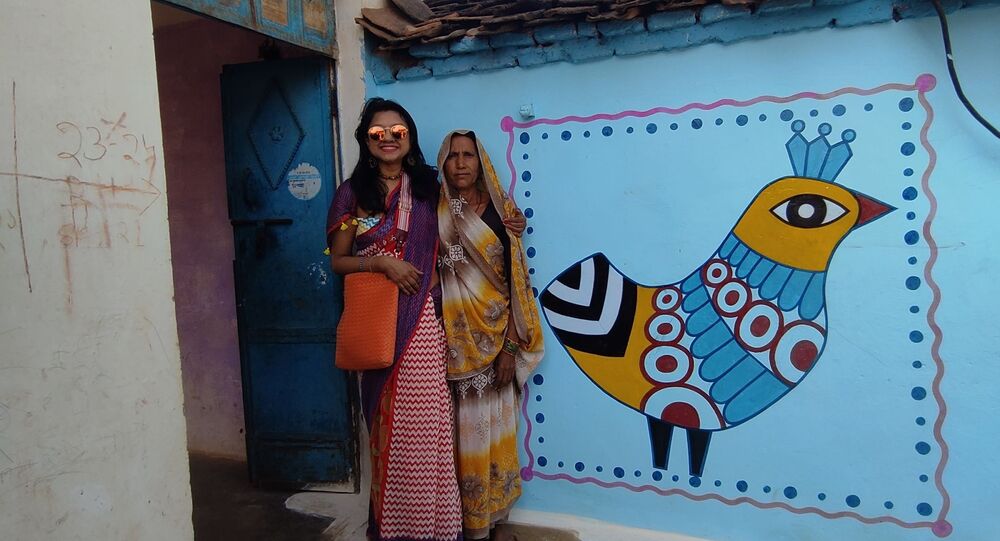 New Delhi (Sputnik): India with its exotic culture and colourful diversity makes for a must-visit travel destination for foreigners: November 2019 alone witnessed over one million international tourists arriving in India, with 43 per cent rise in visa requests and a 19 per cent increase in foreign exchanges (Forex) respectively.

Many international travellers arriving in India are often heard saying that they are here to re-discover themselves, especially spiritually: yoga retreats, multiple varieties of tea and Ayurvedic therapies add to the cultural experience of globe trotters.

To enhance their regional Indian experience, some of these travellers prefer booking home-stays than designated lodging facilities.

Over the weekend, the small town of Orchha in the heart of India – Madhya Pradesh (MP) hosted a group of national and international guests who arrived amid an outbreak of the coronavirus to be part of a cultural festival – Namaste Orchha.

They wished to take a quick and much-needed break from their routine city lives: it was at this point that travellers witnessed how humble farmers, cooks and potters in India's rural areas opened up their homes to strangers with smiles and delicious local cuisine.

Their pockets may be tight, but their hearts are bigger than of any king who has ever existed. :')#RuralHospitality is top notch in India!

​According to Brajendra Singh Rathore, the State Cabinet Minister of Madhya Pradesh, over one-third of the total number of tourists that arrive in small towns are international – they reach non-commercial destinations looking for experiences, stories and memories for a lifetime. Rathore says the history of ancient folklore still thriving in the era of modern-day electronic lifestyles attracts wanderers to the Indian countryside.

​For instance, the city of Orchha, the capital of the Bundela Dynasty, is more than 500 years old, standing on the banks of the River Betwa. The rich history of the town is reflected in the cream coloured architecture of its palaces, forts, temples, and abandoned houses. For art and history enthusiasts travelling to India from around the world, such places come off as a visual treat.

One third of the tourists who visit #Orchha are foreigners, Minister Rathore revealed recently.

The architecture, history and stories of Indian small towns captivate the minds of world wanderers when they come here. pic.twitter.com/fESkZlzosK

​In India's small towns, one can also come face-to-face with moving and soulful tales of the religious and spiritual-minded, who share anecdotes from their lives, making city-dwellers wonder about the strange and restless paradox of their busy lives as compared to the simple existence of small-towners.

It is expected that India will reach 30.5 million global tourist arrivals by 2028. For international travellers, it is a new experience to watch old sages, walking barefoot towards a temple, with idols of local deities mounted on their heads, from their own house to temples.

This old man here, walks everyday from his home to the Ram Raja temple with lord Krishna mounted on his head. The devotee says, he needs to reach the temple -- where he also dances in trance -- so that Lord Krishna could meet Lord Rama.

​“Watching something like this is refreshing. It is so unusual to see the dedication of Indian devotees towards their gods and beliefs. This all makes for food for my soul. I would choose to wake up to such insane stories on my vacations any day over opening my eyes in a hotel room,” said Harry Clements, a European traveller who stayed in a homestay in Orchha – which was his last destination, marking the end of his month-long exploration in India.

Madhya Pradesh state has decided to flaunt a part of its abundance glory in the historic heritage city of Orchha.

​Far away from contemporary concrete jungle style living arrangements in bustling cities, most of the houses in small Indian towns are independent with cosy rooms, a single washroom for everybody, and shelters for cows and goats, that give the village dwellers dairy products to use and sell for extra cash.

Humans and animals exist in collaboration. Foreigners do not mind sharing space with some cows and goats, common as pets in rural India.

​Since occupations in the peaceful countryside are limited to producing traditional handiwork, cooking and farming, foreigners who book local home-stays in small villages also show deep interest in learning new skills like pottery and coal-based tandoori cooking from homeowners – which encourages them to try couch-surfing in other Indian destinations as well.

Sometimes international tourists also sit down and be part of local crafts like clay pottery in rural destinations...

​In a bid to turn their guests' visits into more fulfilling experiences, the local tour guides at most travel destinations in India, practise international languages – especially Spanish, Italian, and French along with English.

“They like it, they understand the significance of places in Indian history and culture – and they feel closer to our traditions. That makes us happy. We are not very educated but we are learning to speak in different languages. We want to learn the Russian, Korean, Chinese and Japanese languages also – but they are very difficult,” said local guide Govind Yadav,  who loves to entertain foreign travellers visiting his little town in Central India.

The local guides at small towns are practicing fluent English because they entertain foreign tourists more than Indians ...

Italian, Spanish and French are three foreign languages that local guides in India are focused on mastering in priority..

​Well, for most of it, international travellers are smitten by the hospitality they experience in India, however there is one thing which makes them feel a tad bit disappointed.

“In most of the archaeological monuments, the entry charges for Indians and international tourists are majorly differential. Makes us feel ‘unwelcomed’,” said Ellen Daniels who was also visiting Orchha as part of her “much awaited” trip to India.

According to the Indian Tourism Ministry's data, in December 2019, Foreign Tourist Arrivals and Forex escalated by three per cent and 16 per cent respectively, despite protests against the controversial Citizenship Amendment Act (CAA) in different parts of the country. The law is protested as it grants Indian nationality to immigrants from non-Muslim communities in Afghanistan, Bangladesh, and Pakistan. Many view it as discriminatory against Muslim immigrants despite the Central government's clarification to the contrary.

The India Brand Equity Foundation (IBEF), is a trust established by the Department of Commerce under the Government of India and has estimated that the total financial contribution from the travel and tourism sector to India’s Gross Domestic Product (GDP) is expected to rise from  $234.03 billion in 2017 to $492.21 billion in 2028.