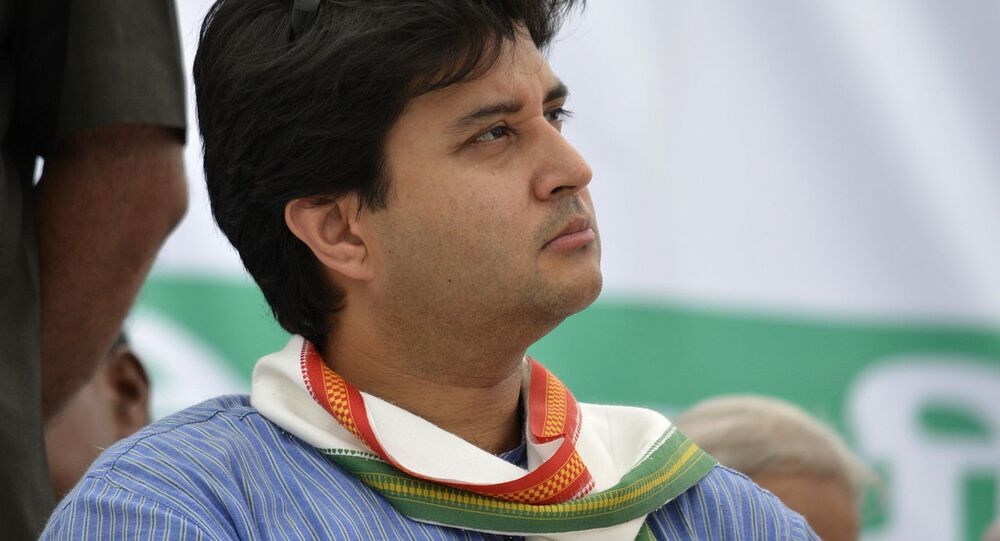 New Delhi (Sputnik): India’s opposition Congress Party barely managed to form a government in Madhya Pradesh after the provincial legislature elections in 2018, with Kamal Nath as Chief. But a faction of the legislators, led by Jyotiraditya Scindia was unhappy, with his claim to the leadership ignored by the party.

On Tuesday, the crisis-ridden Congress Party received a jolt, when Jyotiraditya Scindia resigned from the party.

In a resignation letter sent to Congress President Sonia Gandhi, Scindia said, “To reflect and realise the aspirations of my people and my workers, I believe it is best that I now look ahead at a new start.”

The resignation of Scindia came amid speculations that he would switch over to the federal ruling Bharatiya Janata Party (BJP) and try to topple the government headed by Kamal Nath. Though he had sent his resignation to Sonia Gandhi on Monday, it was formally announced after a meeting with Prime Minister Narendra Modi and federal Home Minister Amit Shah on Tuesday.

Local media reports suggest he would formally join BJP on Tuesday evening, while at least two dozen Congress Party legislators in Madhya Pradesh would also resign from the party and sign up for BJP along with Scindia.

In a statement, Congress Party has announced expulsion of Scindia with immediate effect.

In the 230-member legislative assembly of Madhya Pradesh, Congress Party has 114 members, while the BJP has a strength of 109. Scindia needs to get the support of at least one-third of the strength of Congress Party legislators, or 38 members, to bring in a formal split, without triggering the Anti-Defection Law. The law allows a party to merge with or into another party provided that at least two-thirds of its legislators are in favour of the merger.

A scion of the erstwhile ruling family of Gwalior in Madhya Pradesh, Scindia’s father Madhavrao Scindia was with the Congress Party, and held several portfolios in the federal governments headed by the late Rajiv Gandhi and P.V. Narasimha Rao.

Scindia’s grandmother, Vijaya Raje Scindia was a senior functionary of the BJP and his paternal aunt Vasundhara Raje was Chief of Rajasthan, heading up the BJP government, prior to the 2018 elections in the state.