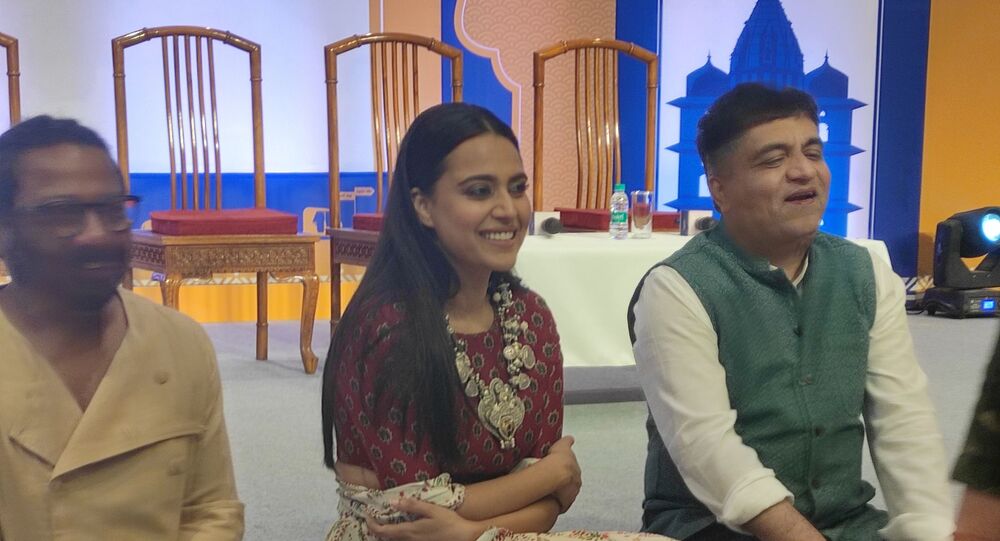 New Delhi (Sputnik): India is abundantly blessed with forests, rivers, oceans, mountains, flora and fauna. But sadly, Bollywood depends on artificial film-cities and foreign locations like Switzerland and Prague to shoot movies. For a while now, the tinsel-townies are struggling to shoot at domestic locations owing to some legitimate concerns.

Over the weekend, some of the most noted national as well as international actors and artists including Gauhar Khan, Swara Bhaskar, Swanand Kirkire, Monica Dogra, Manu Chao, Shilpa Rao and Shubha Mudgal gathered in the hidden heritage town of Orchha in Madhya Pradesh to be part of a three-day art, culture and tourism festival titled “Namaste Orchha”.

The 500-year old small town is located approximately five hours away from Delhi – and is only accessible via roads and rails.

As opposed to their usual business class flight trips, the popular celebrities traveled in trains and buses from Mumbai and Delhi to reach their destination. According to the artists, the little town turned out to be an ‘overwhelmingly captivating’ destination, with stunning cream coloured palaces, forts and temples surrounding the clear waters of the Betwa River.

Talking to Sputnik, actress-producer Swara Bhaskar and singer-composer Swanand Kirkire revealed that constraints like lack of proper connectivity and logistics have held back Bollywood from deeply exploring the Indian landscape and showcasing India’s rich geography to the world.

​“Small Indian towns offer a different texture all together. Now that on-screen content is getting more authentic, real locations are needed. But the first concern of the crew is always – ‘is the location accessible?’” said Swara.

The 31-year old actress revealed that some unusual locations in India go well with some scripts and scenes, where the director, actors and crew members are ready to travel to – but they drop the plan because of reasons like lack of connectivity. For instance, she highlighted that the delicate and expensive light equipment which are required to shoot visual content are usually carried by road to avoid damage, but if roads are not proper, the team drops the authentic location and settles for an alternative.

Swara also cited strict rules around maintaining order in remote and historical locations.  She cited the incidents, which unfolded during the shoot of  th eShahid Kapoor, Deepika Padukone and Ranveer Singh-starrer period drama “Padmavat” in towns in Rajasthan and Maharashtra.

Back in 2017, the sets of "Padmavat" were vandalised and set on fire by community groups who alleged the film of twisting historical facts. Sanjay Leela Bhansali, the ace Bollywood director of the history-inspired period drama was also subjected to physical assault by community groups.

“Along with better connectivity, logistics and hospitality facilities, it is very important that the environment is peaceful and free of vigilante mob,” Swara noted.

National Award winning lyricist Swanand – who has composed and sung songs for blockbuster Hindi movies including 3 Idiots, Parineeta and Masaan – also suggested states should take steps to make their region more suitable for national and international movie makers to explore and work in.

The 48-year old Swanand suggested that state administrations could focus on training interested youngsters in technical skills like acting, dancing, singing, camera, sound and light – which could be of great help to the film teams.

Swanand noted that along with “bringing in more employment in tier two and three cities across India, these initial measures could help film-makers work with regional talents from the country.”

“All Indian states have their unique beauty. Like Madhya Pradesh, locations in states like Chhattisgarh and Rajasthan are also a treat to the eyes on the silver screen. We need more film-friendly people in smaller cities. Make things available for the film-makers, everybody will come,” the singer-composer said.

Mumbai, on the shores of the Arabian Sea, is home of Bollywood. The film-city in Mumbai is over 200 hectares (520 acres) in size and is estimated to be capable of managing 1,000 movie sets at once.

Aside from the stereotypical movie-locations, in February, media reports revealed that a film-city could be created in the white marble-city of Jabalpur – in central India.

Surrounded by national forests, huge balancing rocks and the Satpura mountain range, the small town of Jabalpur flaunts its crystal green coloured waters from the River Narmada plunging from tall rocks made of natural while marble in Dhuadhaar It has waterfalls along with other picturesque locations like Bargi, Payali and the Rani Durgavati Fort.