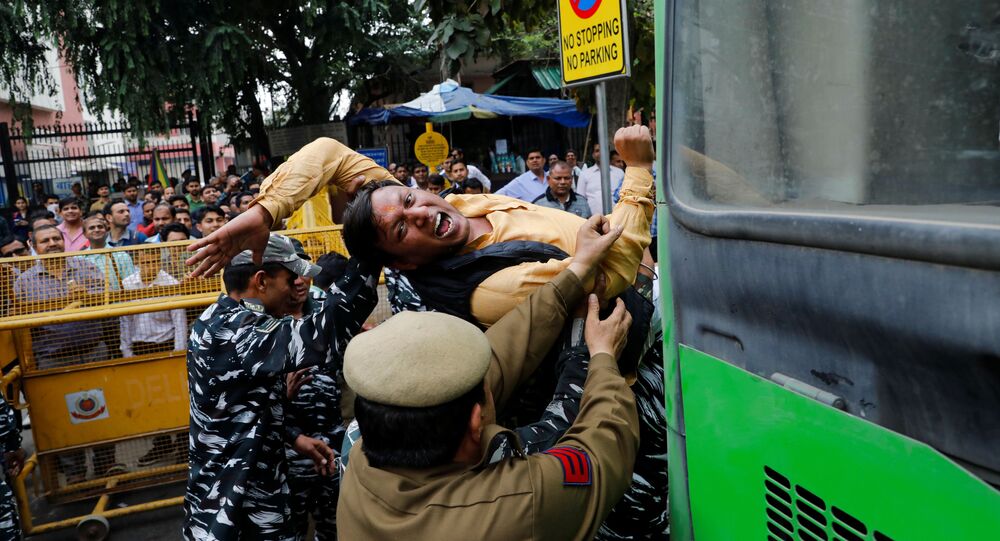 New Delhi (Sputnik): The Indian Foreign Ministry has blamed foreign leaders and western media for changing the narrative and politicising the recent violence in Delhi. The Delhi Police had earlier set up special units to find out the reason behind the spread of the violence, one of the teams submitted its findings to the Home Ministry on Friday.

The intelligence wing of the Delhi Police has traced over a hundred social media accounts that have been used to peddle fake news to spread hatred among Indian communities during last month's violence in northeast Delhi. These accounts are allegedly linked to the Insaf Students Federation (ISF), the student wing of Pakistani Prime Minister Imran Khan’s Tehreek-e-Insaf party.

Delhi Police have documented the fact in a report titled "Fake News in Social Media in Delhi Protests" and it was submitted to the Indian Home Ministry on Friday for the necessary action, sources said.

The report claimed that the Insaf Students Federation projected the riots in northeast Delhi to be an “anti-Muslim genocide” and the group is one of the main perpetrators who spread rumours on 1 March in new areas of riot-hit Delhi by peddling fake news through accounts bearing Hindu names.

The riots have claimed 52 lives so far while over 400 were left injured in the violence that lasted from 23 to 25 February.

The Indian government claimed that external meddling by Pakistani groups aimed at creating a proxy war in the country, making it appear to be “anti-Muslim genocide” by creating trending hashtags.

“The system recorded external meddling by Pakistan to create a proxy war in the country, making it ‘anti-Muslim genocide’ by creating trending hashtags…The account of anti-Indian influencer, Zaid Hamid, is withheld in India. However, his tweets have been spread across the country using bot/troll accounts", the report reads.

The Indian government has received severe criticism from leaders across the globe which is evident in the changed narratives of the violence that erupted after anti-citizenship protesters tried to block several roads in northeast Delhi on 23 February — a day ahead of US President Donald Trump’s state visit to India.

On Thursday, Iranian Leader Ayatollah Ali Khamenei slammed the Indian government, terming the recent violence in Delhi as a massacre of Muslims saying the government should stop this immediately to prevent India’s isolation from the world of Islam.

Soon after the comments made by the Iranian leader, Pakistani Prime Minister Khan also urged other Muslim countries to speak out and condemn the Delhi violence. Last week, Pakistan, Turkey, and Indonesia also issued statements on the Delhi riots.