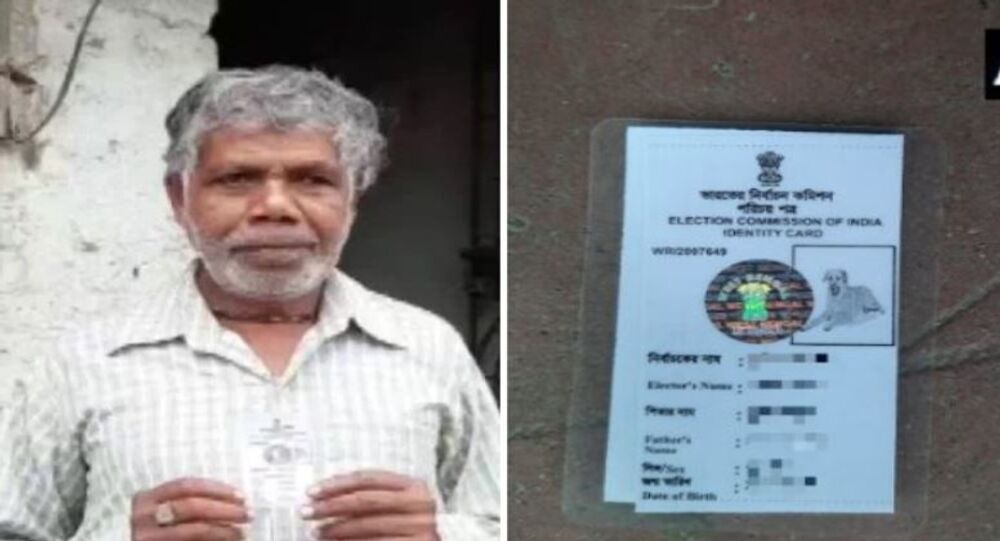 Nothing to Bark About: Indian Villager Receives Voter ID Card With Dog's Photo in West Bengal

New Delhi (Sputnik): The voter ID card, also known as the Election photo identity card, is one of the most important documents for Indian citizens. The card is issued by the Election Commission of India to all Indian nationals who are eligible to vote.

A resident of the Indian state of West Bengal was left stunned to receive his voter identity card with a dog’s picture on it on Wednesday.

Sunil Karmakar, a resident of Ramnagar in the Murshidabad district of West Bengal, applied for a correction to his voter ID card but when he went to collect his revised card, he noticed that it had a dog’s photo on it instead of his.

“I was asked to come to Dulal Smriti School to collect my voter ID card. After receiving it when I checked for the changes, I noticed that it had a dog’s picture on it. This is like playing with my dignity", Karmakar said.

The Block Development Officer (BDO), however, has assured him that the picture will be corrected and the revised ID card with the right photo will be issued soon.

Sunil Karmakar of Farakka in Murshidabad district in West Bengal was shocked when his new voter ID card had a dog's image instead of his picture @fpjindia pic.twitter.com/qflRp8z9gY

"As we have found out that there is a mistake, we’ll correct it. The mistake with the dog’s picture might have happened while filing an online application. We will issue him the correct voter ID card with his own picture soon", he added.