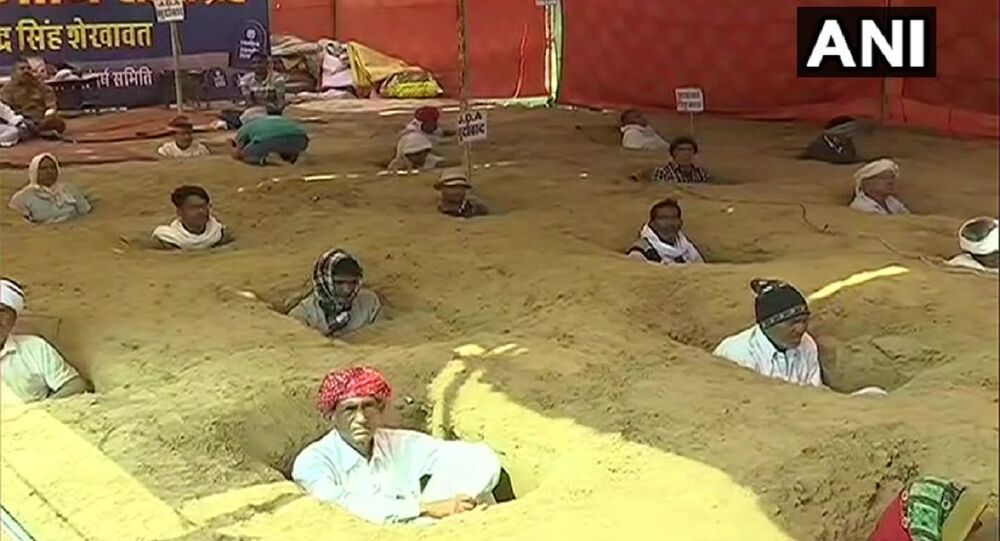 New Delhi (Sputnik): In 2010, 500 farmers from the village of Nindad in the Indian state of Rajasthan were informed that the state government was going to acquire their lands to complete a housing project. Ten years later, the farmers from Nindad are protesting against the unsatisfactory outcome of the acquisition.

As part of their demonstrations, over 50 farmers, including women, have buried themselves in the hot sand on the outskirts of Jaipur for two main reasons: the declaration of unfair monetary compensation and demand for land possession even before releasing compensation.

The lands of the farmers are being acquired by Jaipur Development Authority (JDA).

Wednesday marked the fourth day of the protests called “Bhoomi Samadhi Satyagrah”, videos of which have begun to go viral on social media.

​Several people have shared posts on social media to get the attention of Ashok Gehlot, the Chief Minister of Rajasthan.

Dear CM we the people of nindar are also following the path of Mahatma Gandhi but it is agonising to see that even the followers of Mahatma Gandhi are lingering on the demands of farmers #ZameenSamadhiSatyagrha #savenindar https://t.co/n8XpWerxC9

​​Earlier, JDA had promised the farmers 25 percent of the developed project land in proportion of the area of their farm lands they had surrendered. However, the deal got cancelled because JDA did not have sufficient capital.

Now, farmers who have given up their lands will have to pay JDA heavy lease money in order to get back the 25 percent developed land each of them were promised.

As of now, it remains unclear as to how the Rajasthan government is planning to address the woes of the farmers in their state.