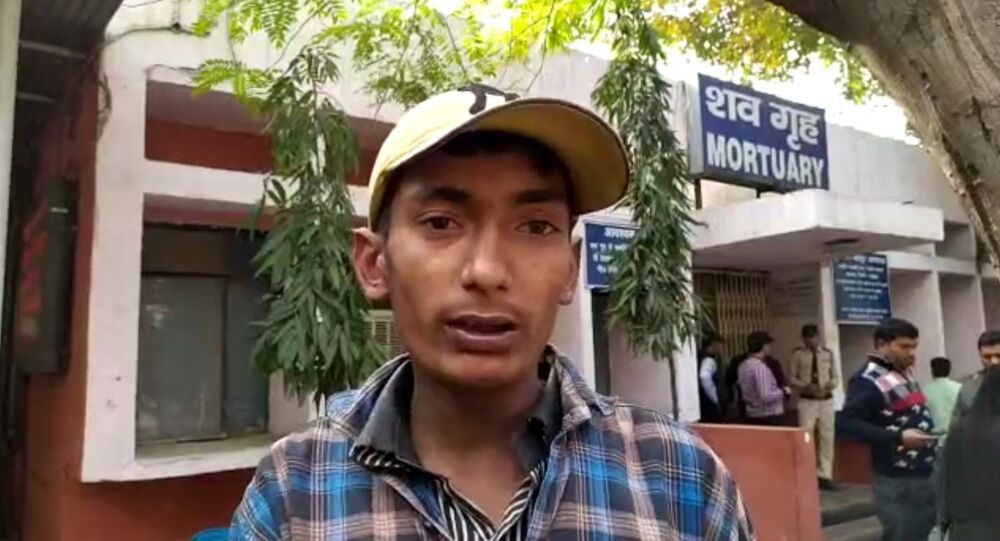 New Delhi (Sputnik): India’s capital New Delhi has been burning in the flames of communal riots for the last three days. The Hindu-Muslim clash has left at least 42 people dead and over 250 people injured.

On Friday, a day after the Indian Home Ministry claimed that the situation on the ground in the riot-affected regions of northeast Delhi had improved, a young boy named Salman revealed chilling details of how Friday morning unfolded for him and his father Ayub who eventually died.

“My father was a rag picker. Like any usual day, he left home for work early morning. Next I knew was my father was lying wounded next to some street vendors. He asked me to quickly take him to the hospital. He also said he was not going to survive", Salman told Sputnik.

The young boy, who was presentt at Guru Teg Bahadur Hospital's mortuary to complete the formalities before bringing back the mortal remains of his deceased father also revealed that the violence in northeast Delhi had not subsided and that people were still going around, asking names and beating up people on the basis of their caste and religion.

​According to Salman, Ayub was beaten up in Shiv Park in the Mustafabad area of Delhi and was dropped near the street vendors by two unidentified men.

The young boy, reached his father once he was informed of his condition. Salman also took Ayub to the nearest hospital to get first aid, but the injuries were fatal and Ayub succumbed to the wounds and pain.

The names of the rioters who killed Salman’s father still remain unknown. The police have not yet registered an FIR on Ayub's death.

Along with Salman, 25 more people are waiting at the Guru Teg Bahadur Hospital mortuary to reclaim the dead bodies of their relatives who lost their lives in the ongoing communal violence.

Throughout this week because of gun crimes, violent protests, stone-pelting, arson, and vandalism of places of worship Delhi made into national and international headlines.

Curfews were imposed, and the police monitoring the situation in the riot-hit regions were also given shoot on sight orders in a bid to bring the violent situation under control. However, prohibitory orders under Section 144 were relaxed on Friday for a total of 10 hours.

The Delhi High Court has asked for help from the National Investigation Agency to probe "anti-national forces" that propagated and instigated the riots against the recently passed Citizenship Amendment Act (CAA) and National Register of Citizens (NRC).

Enforced in December 2019, the controversial CAA entitles non-Muslim migrants from neighbouring countries that came to India before 2015 to apply for citizenship. On the other hand, the NRC requires Indians to prove their ethnicity via paper work and ancestral documents.