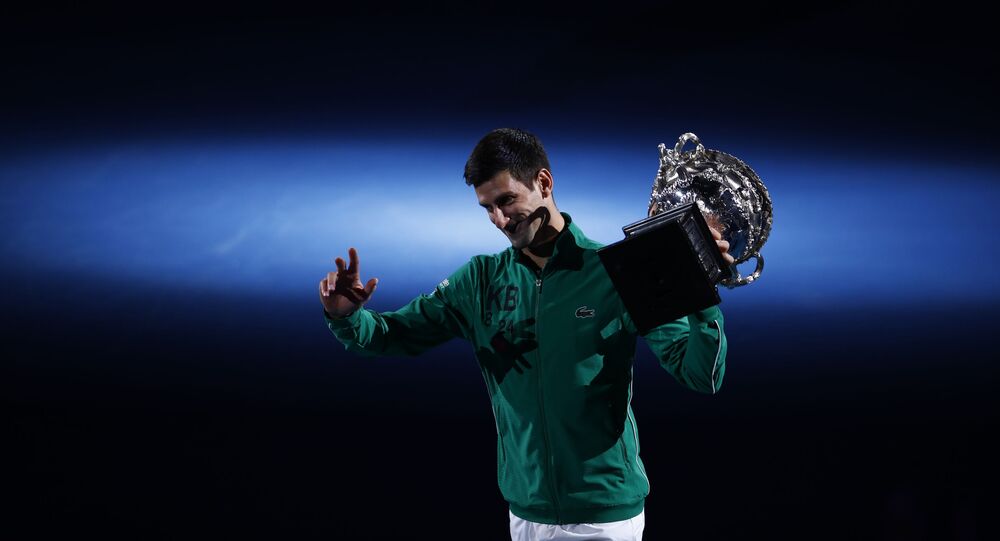 New Delhi (Sputnik): Tennis champion Novak Djokovic, who currently holds the world number 1 spot in men's singles as per the Association of Tennis Professionals (ATP) ranking, has a huge fan following in India too. He last visited the country for the International Premier Tennis League (IPTL) in 2014 and might embark on another to India trip soon.

Tennis World Champion Novak Djokovic has expressed a desire to visit India again because he felt a strong connection to the people of the country.

The world No. 1, who is playing at the Dubai Duty Free Tennis Championships, told Indian entrepreneur Siddhesh Sharma that he wants to express his gratitude to the people of India for supporting him.

“I want to express my gratitude to everyone in India who is supporting me and supporting tennis and plays the game in general. I know tennis has been historically popular in India. I am hoping that I come to India very very soon", Djokovic told Sharma in a video conversation exclusively made available to Sputnik.

“We have a friendly relationship with you (Sharma) for years now and I have a couple of friends in India who keep on inviting me. The ITPL league that I was part of years ago really inspired me. I had a wonderful time and I could experience how tennis is preserved and loved by Indian sports fans. Genuinely I feel close to the people of India so I thank them all", added Djokovic.

Sharma, who is the president of India's leading ayurvedic pharmaceutical company Baidyanath and founder of Shunya,  first of its kind herbal infusion drink, is currently working on building a year-long tennis calendar with two main objectives – to bring world-class tennis to India and develop grass root tennis in the country,

He was also a former national level tennis player and was invited to witness ATP 500 tennis matches by Djokovic at the Dubai Duty Free Tennis Championships.

During their interaction, Djokovic also expressed his thirst for more and what keeps him truly motivated.

“Winning trophies or breaking records gives me motivation but the primary inspiration and the engine for something to keep me going in tennis is a field or platform that allows me to grow my character, to work on the emotional aspects of my being. I learn something new for myself so I think its greatest tool of my life. Also it’s the love and joy for my game", he said.

Sharma also invested in the Champions Tennis League that took place in 2014. He played a key role in bringing world champions Roger Federer and Rafael Nadal to India to play for an Indian tennis team - Indian Aces.