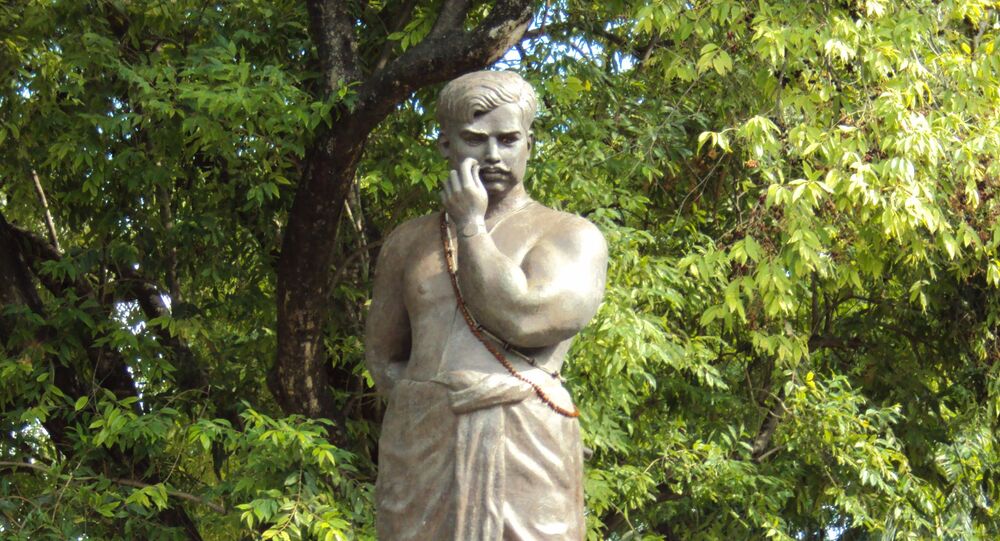 New Delhi (Sputnik): India remembers the iconic figure of India’s Independence struggle Chandra Shekhar Azad on his 88th death anniversary. Popularly known as a master of disguise - he evaded the British every time they came close to catching him. Azad joined the Gandhi-led non-cooperation movement and invoked nationalism among Indian's youth.

His name was not always ‘Azad’, it was Chandra Shekhar Tiwari. The word ‘Azad’, which means ‘free’, was added to the revolutionary leader’s name as a symbol of respect for bearing the marks of whip lashes on his body – a punishment inflicted by the British on him when dared to raise his voice against them.

​Born in 1906, Azad was only 14-years-old when he joined the Mahatma Gandhi-led non-cooperation movement against the British after the Jallianwala Bagh massacre in 1919 when hundreds of civilians were killed by the British troops. The incident shook him to his core.

Azad had pledged to himself that he would never be captured by the British alive. The cherished dream of independent India was at the core of his heart. The incident that narrated the gravity of his resolve against the British is known as the ‘Kakori Train Robbery of 1925’.

A train carrying British money, that was to be transferred to the Treasury, was looted by the members of the Hindustan Republican Association (HRA), a revolutionary group of which Azad was a member.

While the British arrested the conspirators and executed a few of them, Chandra Shekhar was the only one who escaped, and the force failed to capture him. The leader had undertaken several such operations and evaded the British every time until 1931 when an informant gave details to the English about his whereabouts. Surrounded by troops, the 24-year-old Azad shot himself with his last bullet.

​A symbol of patriotism, Azad had sown seeds of nationalism in the hearts of the youth. A popular phrase coined by him still reverberates whenever the nation experiences a heightened sense of patriotic and nationalistic sentiments. “If yet your blood does not rage, then it is water that flows in your veins. For what is the flush of youth, if it is not of service to the motherland,” the freedom fighter once said.