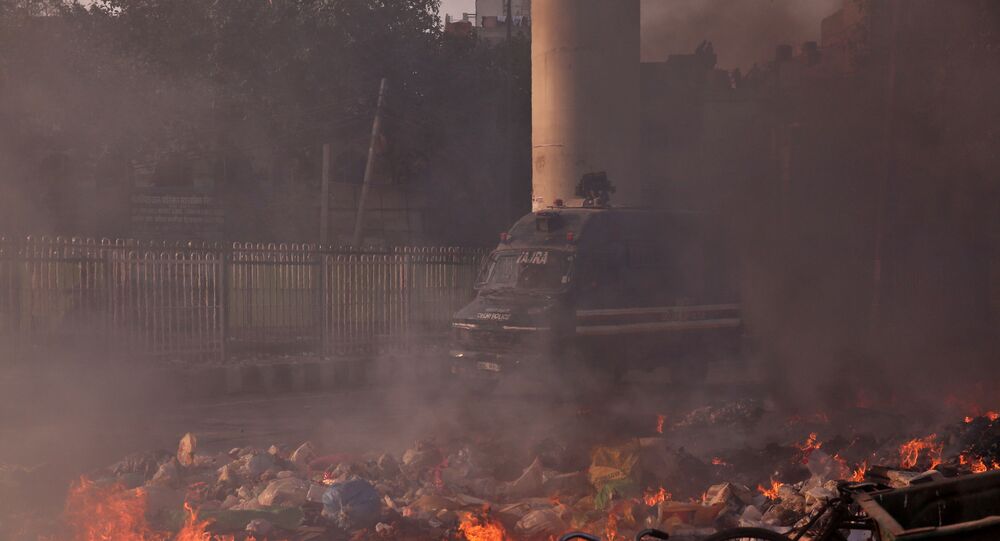 New Delhi (Sputnik): Earlier this week, India’s national capital witnessed one of the worst communal clashes since the 1984 anti-Sikh riots as pro- and anti-citizenship law activists battled it out on the streets.

The northeastern part of India's national capital has witnessed large-scale violence after clashes between pro- and anti-citizenship law protesters turned into communal riots. Several properties, vehicles, and places of worship were either set on fire or damaged, with the police failing to control the frenzy for three days.

As violence continued unabated, rights activist Harsh Mander filed a petition seeking the intervention of the High Court of Delhi. A two-member bench of Justice S. Muralidhar and Justice Talwant Singh came down heavily on the Delhi Police and asked them to take action according to the law. The court also rapped the police for not taking any action against some leaders of the governing Bharatiya Janata Party (BJP) for their hate speeches.

Rahul Gandhi, from India’s main opposition Congress Party, reminded the federal government of a brave judge, who handed down a verdict against the then government in Gujarat headed by Narendra Modi in a fake encounter case.

​Judge Loya, who was hearing the high-profile Sohrabuddin Sheikh fake encounter case in Gujarat, had died of a cardiac arrest in Nagpur on 1 December 2014, where he had gone to attend the wedding of a colleague's daughter.

Transfer of Hon’ble Justice Muralidhar was done pursuant to the recommendation dated 12.02.2020 of the Supreme Court collegium headed by Chief Justice of India. While transferring the judge consent of the judge is taken. The well settled process have been followed.

By politicising a routine transfer, Congress has yet again displayed its scant regard for the judiciary. People of India have rejected Congress Party and hence it is hell bent on destroying the very institutions India cherishes by constantly attacking them.

Social media users, however, came down heavily on the government, calling it "utterly shameful".

A notification issued by the federal Ministry of Law and Justice has been making the rounds on social media. It reads: “In exercise of the power conferred by Clause (1) of Article 222 of the Constitution of India, the President, after consultation with the Chief Justice of India, is pleased to transfer Justice S. Muralidhar, Judge of the Delhi High Court, as a Judge of the Punjab and Haryana High Court and to direct him to assume charge of his office in the Punjab and Haryana High Court".

On the day, Justice Muralidhar of Delhi HC grilled Centre & Delhi Police over violence in NCR and inaction against BJP leaders for their communal/hate speeches, Govt issues notification effecting his transfer to Punjab and Haryana HC.
Collegium recommended his transfer on Feb 19. pic.twitter.com/yJQPeJwqLR

Remember that the beginning of the end of General Parvez Musharraf's dictatorship came with the firing of Pakistan's Chief Justice and arrest of judges.

Shame on the cowards!! They transferred #JusticeMuralidhar in a late night coup !! That's height of tyranny!! Utterly shameful !! #DelhiBurns pic.twitter.com/H5eJLZzITL

Justice Murlidhar uses strong words for Delhi police, some BJP leaders and how center played it's role in Delhi Riots 2020.Result ? he gets transferred immediately.What can you expect from these morons and criminals.They never take criticism lightly. #JusticeMuralidhar

The judge Justice Muralidhar who was asking hard questions on hate speech case against Kapil Mishra, Parvesh Varma and Anurag Thakur got transferred. Now please tell me this riot was not with complicity of state and this was a routine transfer. #JusticeMuralidhar #DelhiRiots2020

Is this really the greatest democracy that Modi keeps on telling...we the people of India need to act before it's too late.#JusticeMuralidhar pic.twitter.com/oFsJktYFeP