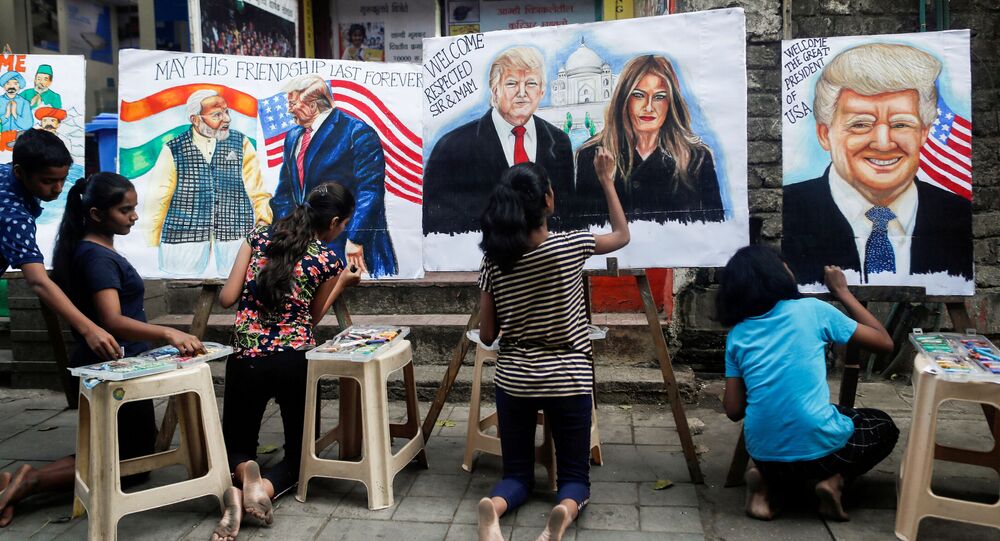 New Delhi (Sputnik): US President Donald Trump is scheduled to make his first visit to India on 24 February. During his two-day trip, Trump will spend a day each in New Delhi and Ahmedabad, where a stage has been built at Motera stadium for an address by Trump and Indian Prime Minister Narendra Modi.

A temporary gate at Motera Stadium in the Indian city of Ahmedabad collapsed on Sunday. The arena will be the venue of ‘Namaste Trump’ event, where the visiting US president and Indian Prime Minister Modi are scheduled to jointly address over 100,000 people on 24 February.

​The temporary gate collapsed due to high-velocity winds as the preparations were in their final stage to welcome Trump in Modi's home state. No injuries were reported following the incident. While the scheduled events have not been affected, the local administration is looking into the matter.

Immediately after arriving at Ahmedabad airport, Trump and Modi are expected to undertake a 22-km journey to the Motera stadium, according to Ahmedabad Municipal Commissioner Vijay Nehra.

Motera stadium, also known as Sardar Patel Stadium, is the world’s largest stadium, recently rebuilt by the Ahmedabad municipal corporation after the old structure was demolished; it was constructed in 1982. Before the arrival of Modi and Trump for the “Namaste Trump” event, cultural programmes will be held in the stadium.

The stadium spreads across 180,000 square meters, and can boast of world-class amenities such as a 55-room club house, gymnasium and an Olympic size swimming pool.

In the two-day visit by the US President, India and the US are expected to sign a multi-billion dollar defence procurement deal.

On the trade front, much is at stake for India ahead of the Trump visit. There have been a lot of back and forth debates over the trade issues. While it is still unclear whether a Indo-US trade deal will be signed at all, a lot of trade matters are still pending.

While the US is demanding access to India's dairy and poultry markets and a tariff reduction on Harley Davidson bikes, India wants the restoration of its ability to take advantage of the US Generalised System of Preferences (GSP) reduced import tariff system. US withdrew India's GSP status in June last year. Under GSP, India exported at least 3,000 goods at reduced tariff rates to the US. India-US bilateral trade reached $142 billion in 2018.