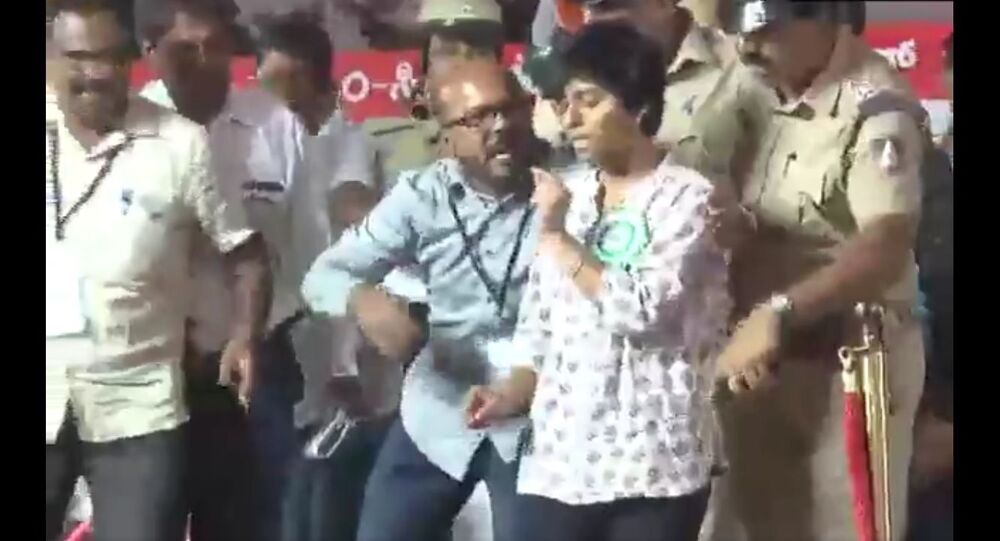 A 20-year-old woman was taken into 14 day judicial custody and slapped with sedition charges for raising slogans favouring Pakistan at an anti-Citizenship Amendment Act rally in Bengaluru.

During the rally on Thursday, attended by Hyderabad parliamentarian Asaduddin Owaisi, a woman identified as Amulya got on stage and started chanting "Pakistan Zindabad" (Long Live Pakistan) slogan. The event's organisers immediately intervened and stopped her, as a huge ruckus broke out. She was later handed over to the police.

The lawmaker himself condemned the incident.

Karnataka State Chief B.S. Yediyurappa has said the woman, who has been charged with sedition for raising pro-Pakistan slogans during an anti-CAA event in Bengaluru, had links with left-wing group Naxals in the past.

The video of the incident is going viral on social media.

#WATCH The full clip of the incident where a woman named Amulya at an anti-CAA-NRC rally in Bengaluru raised slogan of 'Pakistan zindabad' today. AIMIM Chief Asaddudin Owaisi present at rally stopped the woman from raising the slogan; He has condemned the incident. pic.twitter.com/wvzFIfbnAJ

​According to reports, Amulya’s father on Friday condemned his daughter for shouting pro-Pakistan slogan at the public rally.

"I condemn Amulya for shouting pro-Pakistan slogan at the rally and disown her views on CAA, NRC or NPR. I was not aware about her act till a friend called and told me about it last night," Oswald Naronha, said.

The man added that a mob attacked their house and vandalised it on Friday morning. Police have moved Amulya's parents and are providing them with protection.

#Karnataka: A mob has vandalised #AmulyaLeona's (who raised 'Pakistan zindabad' slogan at an #antiCAArally in Bengaluru, yesterday) house in Shivapura village (Koppa taluk) in Chikkamagaluru district. Police have shifted Amulya's parents and are providing them protection. pic.twitter.com/iPTIBvt2ld

A recent video which is going viral on social media claims that Amulya works for a Bengaluru student alliance.

The Citizenship Amendment Act (CAA), passed by the Indian parliament in December 2019, grants citizenship to Hindu, Sikh, Christian, Buddhist, Jain, and Parsi illegal immigrants from Pakistan, Bangladesh, and Afghanistan who faced persecution in their homelands and arrived in India on or before 31 December 2014.

It, however, doesn't extend the same rights to Muslims, which sparked nationwide protests as people have claimed it's discriminatory. The government denies these accusations.