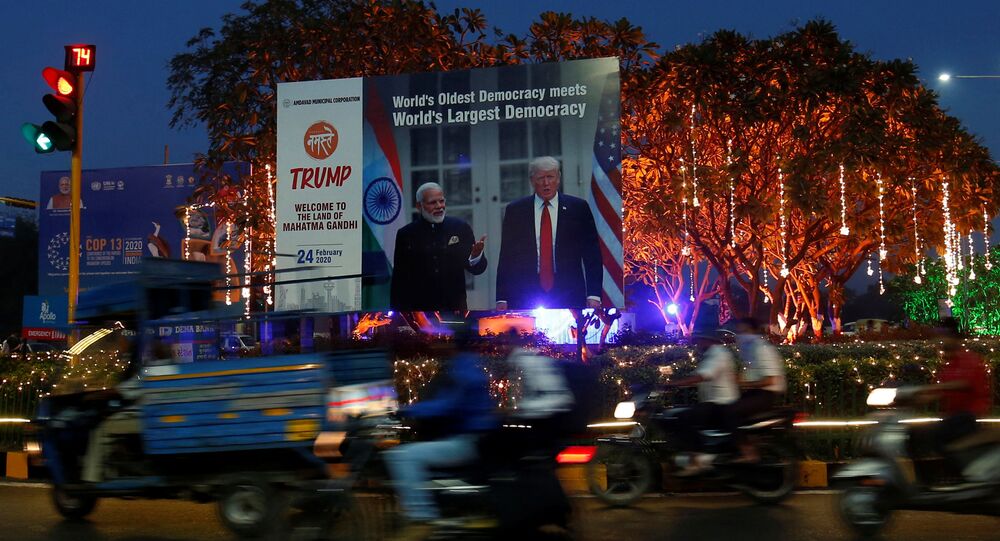 New Delhi (Sputnik): US President Donald Trump is scheduled to make his first visit to India on 24 February. During the two-day trip several strategic issues like trade, defence, security and intellectual property rights are expected to come up for discussion.

IT professionals in India hope that New Delhi will take up the issue of visa restrictions in the US during the forthcoming discussions with President Donald Trump.

Their concern stems from US move to restrict H-1B visas for Indians to 15 percent of the total, after New Delhi decided to go ahead with a new data protection legislation, which requires data localization by US-based IT majors, despite reluctance from Washington.

India’s foreign ministry spokesman Raveesh Kumar indicated on Thursday that H-1B visa concerns would be on the table for discussions with the US delegation.

The H-1B is a non-immigrant visa that permits companies to temporarily employ highly skilled workers from other countries in sectors including IT, finance, medicine and architecture among others.

But last year, news began to circulate that the US has been planning to restrict the H-1B visas for Indians to 15 percent of the total after New Delhi drafted new legislation for data protection that comes with a data localization requirement. The US is against data localization as it would mean American companies would have to increase their investments in India and facilitate storage of data generated in India within the country itself.

“Right now is just the appropriate time to push the H-1B visa issue because the recent turn of events like US’ ongoing trade war with China for instance, have left only some options for American companies to out-source skilled man power – which India has to offer,” said Indian IT worker, Chiranjeevi Shrivastava.

The US grants 85,000 work visas annually, out of which nearly 70 percent are bagged by Indians, according to United States Citizenship and Immigration Services (USCIS) data for 2017.  At the time, the USCIS noted that out of the 3.4 million H-1B visa applications filed in the decade to 2017, Indian applications made up around 2.2 million.

In addition to the bar on H-1B visas for Indians, in November 2019 the USCIS also proposed an increase in visa fees along with rules that would restrain American companies with over 50 staff members – half of which were on H-1B visas, from applying for more. The time taken to process the H-1B application also went up from 3.2 months in 2018 to 5.2 months in 2019

However, the Indian IT trade association, National Association of Software and Services Companies (NASSCOM) challenged the legality of the proposed fee hike, which could take the H-1B visa cost to $4,000.

Earlier in January, NASSCOM filed a complaint with the Department of Homeland Security (DHS) against the H-1B fee hike proposal claiming that only the US Congress has the authority to raise visa fees, not USCIS.

“The reputation of Indians in US industrial circles is pretty positive as of now. Some of the top American companies like Microsoft, Adobe, MasterCard and Google are being led by Indian chiefs. Companies like Google, Facebook and Microsoft among many others have been training Indian techies in emerging technologies themselves, because we are one of the youngest countries in the world with over 400,000 students graduating engineering colleges every year,” said Sheena Sharma, who is a software engineer at US-headquartered company in New Delhi.

Earlier this week, President Trump said even though he likes Prime Minister Modi, “the US is not treated well by India”.

In addition to India’s data localisation requirement despite opposition from the US, there may be other factors that may have given President Trump this impression. For instance, India allowed Chinese tech major Huawei to participate in its 5G trials despite constant warnings from the US that claimed that the move could put India’s national security in jeopardy.

India has also retaliated against America’s decision to hike customs duties on certain steel and aluminium products by significantly increasing import duties on 28 American products, which resulted in strained trade tensions between New Delhi and Washington.

The American President, along with his wife Melania will first land in Gujarat to inaugurate the world’s largest cricket stadium in Ahmedabad. Trump is also expected to visit the Taj Mahal in Agra. He will then go to New Delhi for bilateral talks.