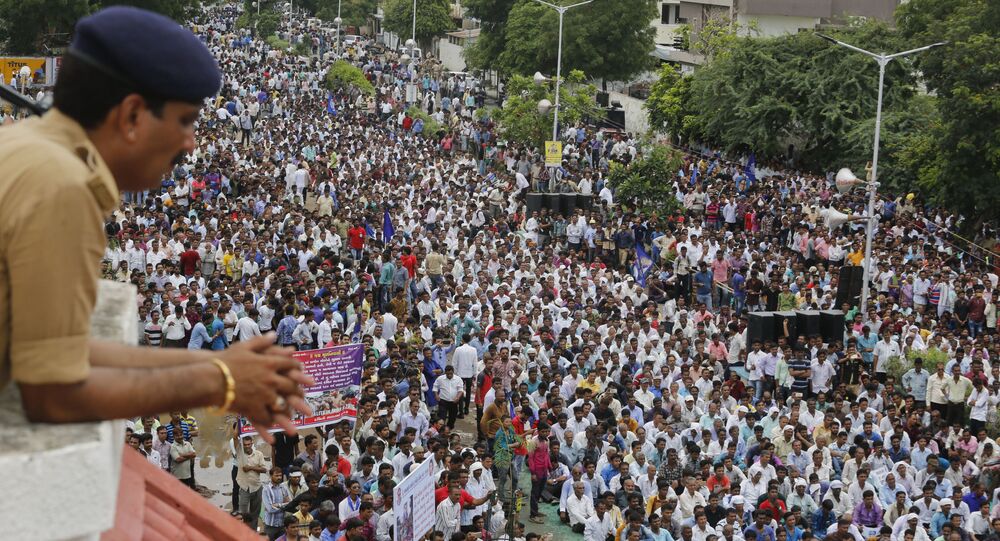 New Delhi (Sputnik): The Indian Constitution does not discriminate against any citizen on the basis of his religion, caste or social status. This is the statute, but ‘Dalits’ or people in the lowest strata of the caste-system, still face insult and injury at the hands of the so-called upper castes.

Judging by several recent atrocities against India's 'Dalits', who were treated as untouchables according to the caste system in India, there is still no guarantee by the state or statute that can give them equality.

The latest incident against Dalits was reported in western Rajasthan, where five persons were arrested for thrashing and torturing two youth from the lowest caste, on the suspicion of theft. A video of the incident, which occurred on February 16, showed the perpetrators inserting a screwdriver with petrol into the rectum of the victims.

Again on February 16, the wedding procession of an army sepoy from a ‘Dalit’ community was disrupted by upper castes in Gujarat, the home state of Indian Prime Minister Narendra Modi, because the groom was mounted on a horse, a custom during weddings in several parts of the country.

According to the reports, a section of upper caste had warned the army personnel’s family not to take out his wedding procession on horseback.

However, when the wedding procession was being taken out, around a dozen people from upper caste communities pelted stones at members of the wedding party. The groom was allegedly dragged off the horse and beaten despite the police presence in Gujrat’s Banaskantha district. The police finally took the groom on its vehicle to the wedding venue.

Man beaten for defecating in a field in Tamil Nadu

On February 12, 2020, a 24-year-old Dalit man was brutally beaten by a mob after he allegedly stopped to defecate in an open field in Tamil Nadu state, in southern India.

According to reports, the victim identified as Sakthivel had stopped at an open field to defecate when a female passer-by noticed him and alerted people, alleging him of exposing himself to her.

A mob gathered and caught the man, tied his hands and legs and brutally assaulted him.

Tamil Nadu, Villupuram, Man Beaten To Death, Family Alleges Attacked For Being Dalit
Sakthivel was beaten up by a mob in Ta... pic.twitter.com/KR7GKlTD3E

Shaktivel's family reached the spot and rescued him, but he succumbed to his injuries and died later that day. His family alleged that he was attacked because he was from a lower caste.

According to the police, seven people were arrested in connection with his death.

On 6 December, 2019, a 20-year-old youth was allegedly beaten and made to shave his moustache in Mehsana district of Gujarat.

According to the reports, the victim, belonging to a minority community, was seen twirling his moustache in a video on Tik-Tok (a popular video-sharing platform). After the video spread, a group of villagers from other castes confronted him and threatened to shave off his moustache

The victim agreed to their demands to avoid conflict, but he was still made to apologise and was thrashed in public.

The victim Sanjay Parmar who was beaten by Darbar community members in a Mehsana village said "Growing moustache is a natural thing, but not the caste, so he will grow and sport a moustache again".#DalitAtrocities #Mhesana #Gujarat pic.twitter.com/OXKgKyTHwM

Man Beaten with sticks for dropping food in Gujarat

On 3 November 2019, a 30-year-old Dalit man was thrashed allegedly by four men in Gujarat’s Ahmedabad city after he dropped a dish of food at an eatery.

The victim Pragnesh Parmar along with his friend had gone to an eatery for dinner, where he allegedly dropped a dish. The eatery owner and several others beat him with sticks and a baton. A video of the incident had also gone viral in which Parmar was seen stripped and assaulted with a baton.

I will declare a Gujarat Bandh if the police does not arrest the perpetrators in 24 hours who attempted lynching of two Dalit youth in Ahmedabad yesterday night. Don't think Dalits are cowards: we believe in Constitution! pic.twitter.com/1Ge5Nw76Se

On 25 September 2019, two Dalit children aged- 12 and 10, were allegedly beaten to death by two persons for defecating in the open in Madhya Pradesh’s Shivpuri district.

The father of one of the deceased claimed that they had been facing discrimination over their caste in the village, where the incident took place. Police had arrested two men in connection with the case.
As per the National Crime Records Bureau (NCRB), which comes under Federal Home Ministry, as many as 42,793 cases of crime or atrocities against Scheduled Castes(SCs) or Dalits were reported in 2018 from across the country.