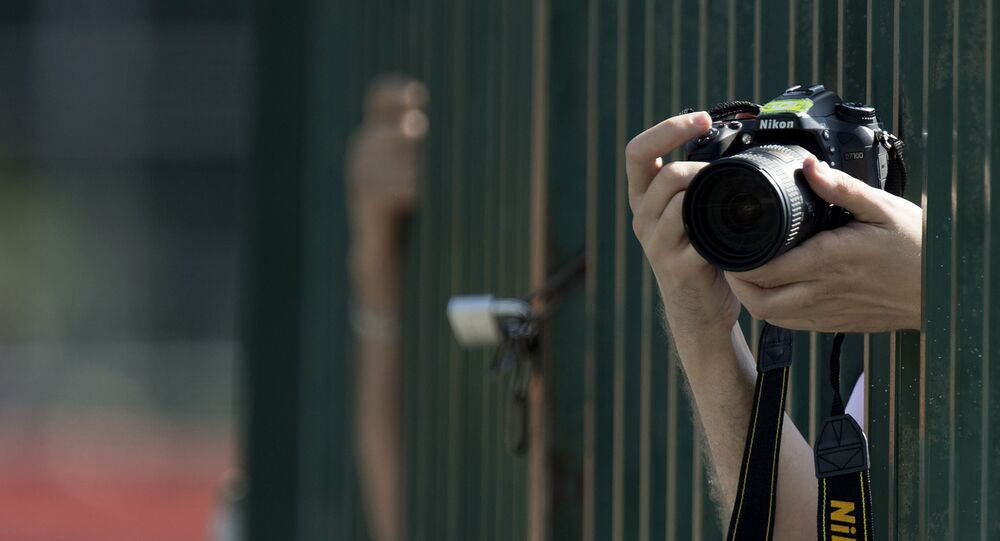 Photographers Around the Globe Have Many Platforms, India Is Still Struggling - Lensman Harish Tyagi

Harish Tyagi, who is currently the chief photographer (Indian subcontinent) for the European Press Photo Agency EPA and one of the jurors on the Andrei Stenin International Press Photo Contest, an annual contest for young photojournalists, believes that photography as a profession has drastically changed in India over the years with people looking at it as a serious career opportunity.

“Photography has certainly come a long way in India and become a well respected and sought after profession. Until a decade ago it was a small, underpaid industry incomparable to its industry counterparts in other countries", Harish Tyagi told Sputnik in an interview.

He feels that “in other countries, photographers have many platforms to showcase their work (but) in India we are still struggling to come to par on that".

Tyagi is the only double recipient of the National Media Fellowship for photojournalists from the National Foundation for India (2000-2001 and 2007-2008) when he worked on "Seasonal Distress Migration and its effects on Children".

He was also congratulated by the prestigious International media publication "Editor and Publisher" for his picture on Tsunami in the News (Spot/General) in 2005-2006 and won silver in the Spot news single category in 2005 in the China International Press Photo Contest.

Tyagi recently won the Photo Journalist of the Year award, 2019 at the Kalinga FCC Awards for Excellence in Journalism for his ongoing work about pollution in the river Yamuna.

A strong believer of “A picture is Worth a Thousand Words”, Tyagi feels that there is no comparison between social media and mainstream media in today’s “digitally inclined” world.

“In my opinion, any social media can be a good platform to advertise your work and to interact with your followers. But surely it is not very reliable unless you know the photographer personally or understand the background of his work. Good and strong news pictures find their way into reputable journals, newspapers, and websites first before coming into the social media platform which remains crowded and unfiltered on the broader scale", he elucidates.

So how should one take a cue from this changing trend in digital dependency?

“The digital world has had an overhauling impact on photography – the way it is shot, edited, viewed, and transmitted. It has reduced the time lag between an event and the point where the photograph is seen by the end viewer", he said.

“The unfortunate fallback of the digital world has given rise to a new sort of unqualified and also often unethical form of journalism. This is due to the advent of smartphone cameras where any passerby can photograph or take videos of a scene and within minutes the footage goes viral. There are no checks and balances or ethical codes anymore as common people who indulge in this have little or no clue of the impact unruly or gross images can have on the popular public at large. Sooner or later, a code of conduct has to come into place for this", added Tyagi.

This is probably the reason why he feels that “It is very important for a photographer to connect with viewers or photo enthusiasts emotionally”.

“Because whenever you open a newspaper or a news report you see the image first then you read the story. Images in the newspaper or in news reports are like a window in a closed wall that allows you to breathe. If the image is strong enough and connects emotionally with the viewer you have succeeded as a photographer", he said.

For someone who's been in the industry for nearly 23 years, he is looking forward to judging young and aspiring photographers at the Andrei Stenin International Press Photo Contest as a jury member.

© AP Photo / Alastair Grant
'Did Just What We Wanted': Banksy's Former Photographer Reveals Secrets of Enigmatic Street Artist
“The contest is for photographers between 18 and 33 years of age. This is the age when you have the maximum energy and ability to produce the variety of work required for all four categories in the contest like top news, sports, my planet, and portrait", he quipped.

The Andrei Stenin International Press Photo Contest is an annual contest for young photojournalists aged between 18 and 33. The contest was founded on 22 December 2014, by the Rossiya Segodnya International Information Agency under the auspices of the Commission of the Russian Federation for UNESCO.

In 2019, the contest set a new record - around 6,000 entries from 80 countries across five continents were submitted. Traditionally, Indian photographers actively participate in the competition and win prizes for their efforts. Over the contest's history, winning photos have been exhibited in Moscow, Shanghai, Cairo, Beirut, Cape Town, Budapest, Madrid, San-Donato-Milanese, New York, and other cities. New Delhi has hosted an exhibition of the All India Fine Arts & Crafts Society gallery twice.