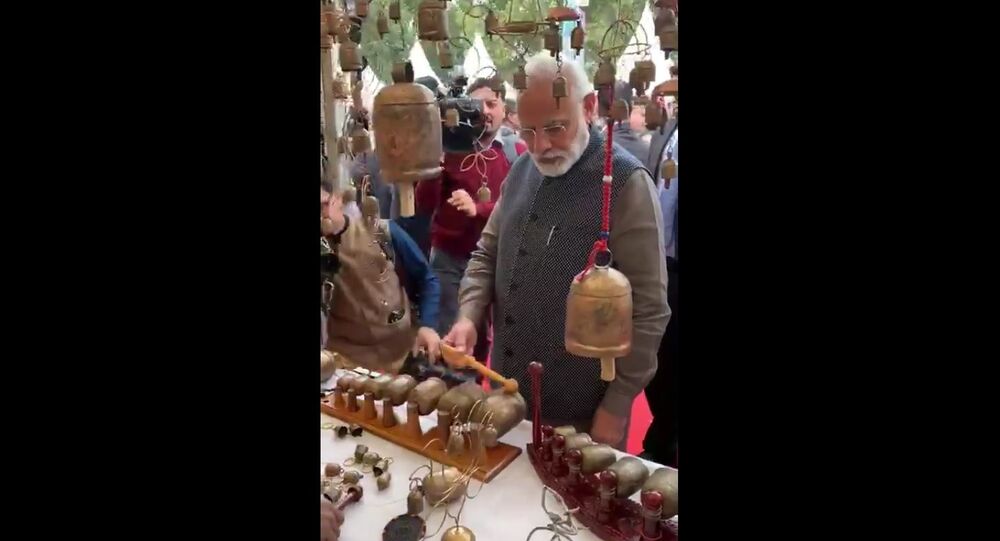 New Delhi (Sputnik): With 53.1 million followers on the microblogging platform Twitter, Prime Minister Narendra Modi is one of the most followed politicians in the world. But all this fan following does not come easy. Prime Minister Modi makes it a point to keep his followers engaged and entertained with his official and “special” posts.

Later, he also shared a 51-second clip of him playing an unusual metal musical instrument with tiny metal sticks at the Kutchi copper-bell handicraft shop. The clip shows the prime minister surrounded by photographers, security guards and attendees at the art fair comprising over 250 stalls displaying the country's crafts, handiwork, food, music, décor and more.

While Modi interacted with artisans at the "Hunar Haat” fair, he also relished traditional Indian food along with simmering hot tea served in an earthen pot.

​Now, history suggests that posts from Prime Minister Modi’s account become trending memes in India and this musical post was no different. Netizens quickly began sharing GIFs and hilariously witty comments on the video clip, which has already invoked over 15,000 likes and 3,000 re-tweets within an hour of being posted.

​This is not the first time Prime Minister Modi has let the music-enthusiast in him, out in the open on international as well as national platforms.

In 2014, the leader stunned the Japanese people when he picked up drumsticks and rocked the stage. Later, he also played the flute for Japanese children.

In 2016, when the prime minister while in the East African country of Tanzania, he put his love for drums on full display by performing an impromptu jamming session alongside Tanzanian President John Pombe Joseph Magufuli.

​In 2018, Modi banged a red-coloured traditional Indian percussion instrument called the “Dholak” with his bare hands in the Maoist-affected Bastar region of the country.

While Prime Minister Modi is the second most followed serving leader on Twitter, US President Donald Trump who is visiting India later this month is the most famous politician on the micro-blogging website with over 72 million followers.