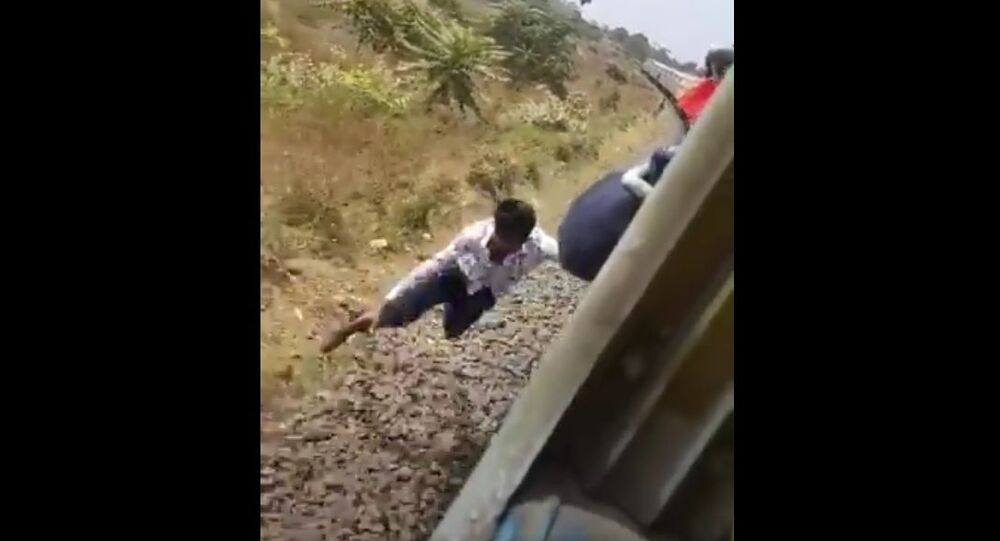 New Delhi (Sputnik): With 44 per cent of its global downloads, India is the biggest market for the Chinese short video making app TikTok. The app, which was temporarily banned in parts of the country for propagating and spreading inappropriate content on social media, is used by over 200 million Indians.

In a bid to promote safety on trains India's Federal Railway Minister Piyush Goyal on Tuesday shared a bone-chilling video clip on Twitter that shows a young boy narrowly escaping a dreadful death.

The seven-second long video sourced from the TikTok app displays the young boy, who was trying to record a video of himself at the open door of a moving passenger train, slip, stumble and fall inches away from the railway tracks, leaving fellow travellers choking for breath.

​Goyal’s verified office account also added a strongly worded caption with the video that read, “Showing stunts in a moving train is a sign of cowardice, not bravery. Your life is priceless; do not put it in danger.”

The short nerve-wracking clip has garnered over 23,000 views and over 1,600 re-tweets on Twitter.

Over the last two years, there have been several accidents and deaths caused because of TikTok fever.

In 2018, Southern India’s Chennai city witnessed two horrifying incidents. In one video, a man who was pretending to cut his throat for the video, actually slit his skin open. In the other incident, a man committed suicide after he was shamed for donning women’s clothes for his TikTok videos.

In January 2019, a man from northern India’s agricultural state of Punjab lost his life after he tried to climb on a moving tractor which had a cultivator machine attached to it for the sake of a daredevil TikTok video. In the failed attempt, the man slipped and fell under the tractor tyres before being trapped in the cultivator. A hazy video of this incident is available on YouTube where the person recording the video can be heard screaming in shock.

Later in April 2019, a 19-year-old boy from the national capital Delhi was accidentally shot in the face by his friend while they were trying to shoot a TikTok video.

In 2019, the High Court of Madras had imposed a ban on the video app for exposing young minds to pornographic content and degrading the culture of India. The ban lasted for nearly 20 days before it was lifted.

In the first half of 2019, India sent a total of 118 requests to TikTok seeking user information or content removals, according to TikTok’s transparency report.

Last April, the Chinese app claimed that it had deployed a human moderation team for content flagging and its removal on a real-time basis, as part of its efforts to stay afloat in its biggest market - India.