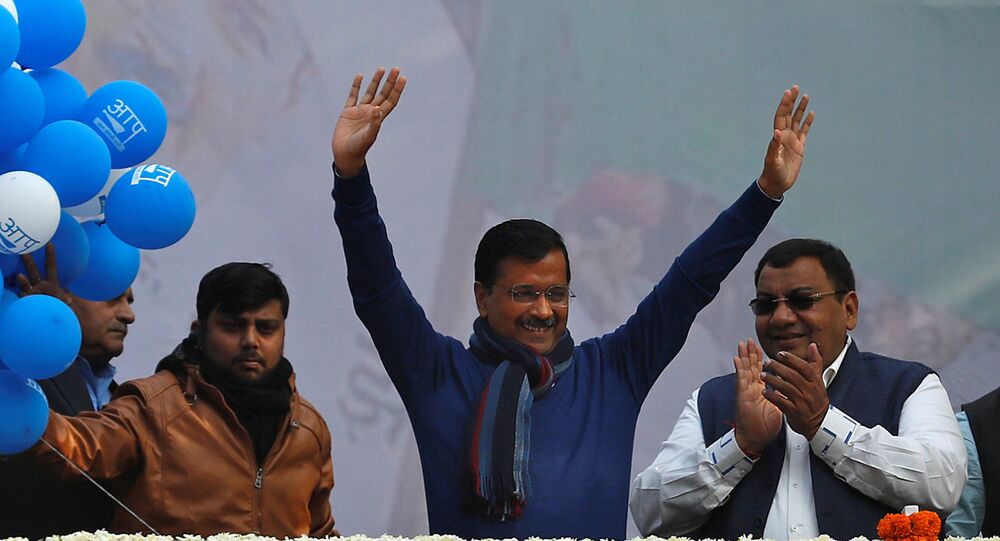 Man of the Moment: Thousands Rejoice as Kejriwal Takes Oath as Delhi Chief

New Delhi (Sputnik): Delhi's regional Aam Admi Party (AAP) received a landslide victory in the polls on 11 February, giving it an overwhelming majority in the local legislature for the third time in a row. In the 70-member legislature, AAP won 62 seats and the remainder went to Prime Minister Modi's Bharatiya Janata Party (BJP).

Arvind Kejriwal, whose Aam Aadmi Party defeated two political heavyweights- Bharatiya Janata Party and the Congress Party, is all set to take oath as the state chief for his third term at the historic Ramlila Ground park on Sunday.

On Sunday morning, Delhi's state chief Kejriwal took to Twitter and urged the people of the nation's capital to attend his swearing-in ceremony to bless ‘their son’.

​Several thousand people reached Ramlila ground, located in central Delhi, to express their love and affection for the leader.

​Several interesting posters were seen at the park; one of them, which is going around the social media, shows Kejriwal with Bollywood legend Anil Kapoor. The poster says "Nayak 2 is back again" (referring to the Bollywood flick in which  Anil Kapoor was the state chief for a day and worked for the welfare of the people).

​Delhi residents shared their expectations regarding Kejriwal, with Sputnik:

“We are really happy that AAP is back in power. We would want them to continue working for the poor people. A normal man would want free water, low electricity bills and a good education for their children. He has provided us with all of it,” says Ashok Mehta, an auto rickshaw driver.

While Suniti Sharma, an engineer in her early 40's, says that Kejriwal has fulfilled all his promises during his last tenure and worked for the betterment of the city.

“During his tenure, we want him to work for the development of the city, focusing on woman's safety and traffic issues, as these two are the major concerns of the nation's capital,” said Sharma.

Meanwhile, Kejriwal had invited Indian Prime Minister Narendra Modi to his oath ceremony; however, Modi did not turn up.

The Arvind Kejriwal-led AAP will now be in power for a third consecutive term. The chief minister thanked Delhiiites for giving birth to a new kind of politics – “the politics of work”. In 2015, the party secured 67 seats and the BJP got three. In 2013, in the first-ever elections which AAP's participation, it bagged 28 of the 70 seats in Delhi and emerged as the largest constituent in the state legislature. Kejriwal then formed a government with outside support from the Indian National Congress.