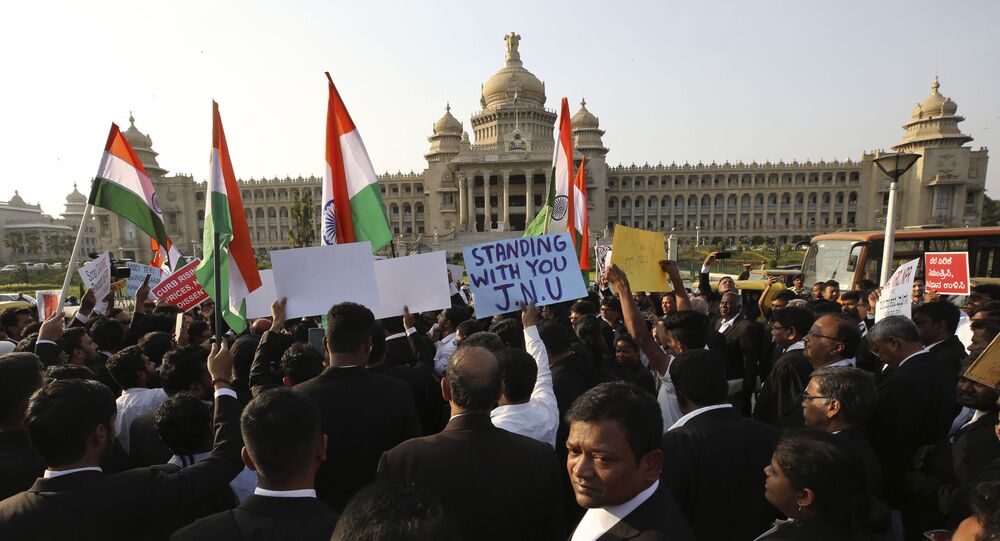 New Delhi (Sputnik): Several regional organizations in India’s southern Karnataka have been demanding a higher share of jobs for locals in state-run and private companies operating in the state, in accordance with recommendations made by a panel more than three decades ago.

A 12-hour shutdown from 0600 Hrs IST to 1800 Hrs IST was called by pro-Kannada organisations, including trade unions, in the southern Indian state of Karnataka on Thursday. The organisations have been demanding state and private sector jobs for Kannada speaking natives of the state.

The western coastal Mangaluru city witnessed incidents of violence on Thursday morning, where pro-Kannada groups threw stones at buses. No one was injured in the incidents.

​Security in the state capital Bengaluru was stepped up as also other parts of the state. Cab hailing services like Ola and Uber were suspended but state-run buses were plying normally.

Bengaluru International Airport has asked passengers to plan their journey accordingly as most other taxi operators and auto-rickshaws were off the roads. Heavy traffic has also been reported at the airport where people have started arriving 5  to 6 hours before their flights.

Around 400 police personnel have been deployed at the main railway station in Bengaluru, one of the busiest areas of the city.

Police have kept some of the prominent leaders, who had called for the shut down, under house arrest. As a precautionary measure, some activists were also taken into custody.

Karnataka state chief BS Yediyurappa has made an appeal to the pro-Kannada outfits leading the strike to not cause inconvenience to the general public and keep their agitation peaceful. "Government always stood for Kannada and Kannadigas and initiated measures to implement the Sarojini Mahishi report," said Yediyurappa.

Bengaluru University has postponed all post-graduate examinations in the view of the shutdown. The Karnataka government announced that schools and colleges would function as usual across all districts.

The strikers are demanding the implementation of Sarojini Mahishi report, which was submitted in 1984. The report recommended a certain percentage of jobs to Kannadigas in the public sector, private companies, and multinational companies.

North Indian states should improve their states n should stop depend on South India for providing everything to them, be it employment or education or tax money etc #KarnatakaBandh

I totally agree that, there is a huge discrimination for the local PPL...
Most of the HR n higher management ppl are non-Kannadigas... They want to get there ppl here.. So that they can feel like home.. speak there Mother tongue n secured..#KarnatakaBandh pic.twitter.com/vqEIoEVXZN

Bengaluru has witnessed a large influx of educated migrants in search of jobs in recent years, as the city has developed as a main hub for information and communication technology.