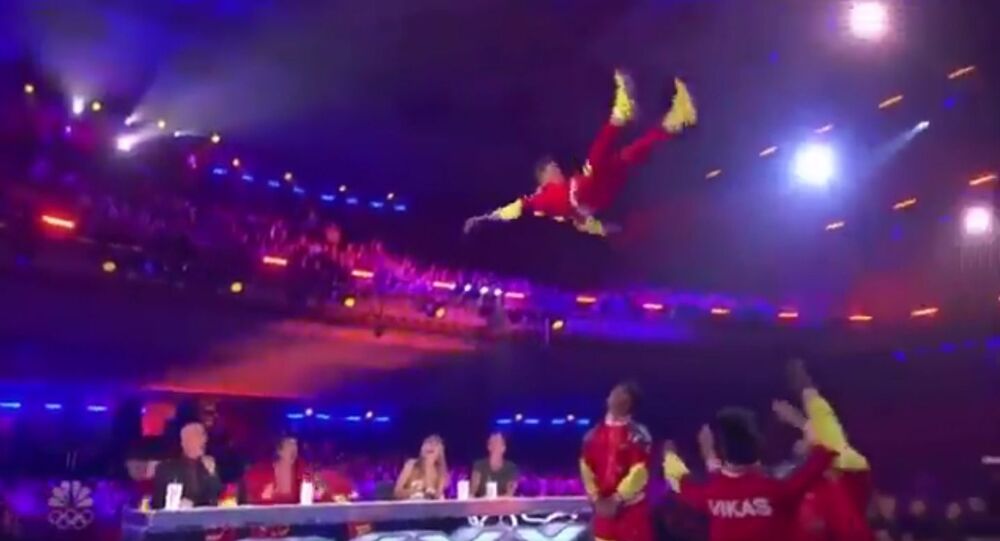 New Delhi (Sputnik): Indian dance group from Mumbai “V Unbeatable” successfully made it to the finals of reality TV show "America's Got Talent" last year but crashed out after nearly getting hold of the trophy. But they received international acclaim and rose to fame with standing ovations and thunderous applause from the judges.

Mumbai-based acrobatic dance group "V Unbeatable" has returned to the US for America's Got Talent: Champions 2 with a bang, bagging a golden buzzer and standing ovation amid the loudest cheers from the judges and audience.

The group has yet again secured their position in the final, courtesy of their stellar performance to south Indian superstar’s Rajinikanth’s song “Marana Mass”.

The troop’s electrifying performance to the song floored the judges. While the judges' panel of Simon Cowell, Heidi Klum,  and Alesha Dixon gave a standing ovation for their performance, Howie Mandel appreciated it by bowing down a number of times.

V Unbeatable has yet again set Twitter abuzz for making India proud with netizens lavishing praise for the troupe and wishing that they come out victorious.

Awesome!!! They so deserve it!! Such an INCREDIBLE ACT!! @v_unbeatable WOW!! Just WOW!!! 😊😊❤️❤️ pic.twitter.com/DIKXnPKxhL

I love @v_unbeatable!!!!! Absolutely favorite, I wanted them to win AGT so bad! They need to win tonight. They really are the best act there tonight. Good luck!!!!

The group said: “It’s a great moment for us to be back in Champions. We were scared after setting a benchmark in season 14; we were thinking what we can do next to impress judges as the level is really high, all the champions are competing. We want to win this show this time. This is our second chance of fulfilling our dream", said the troupe in an interview with Talent Recap.