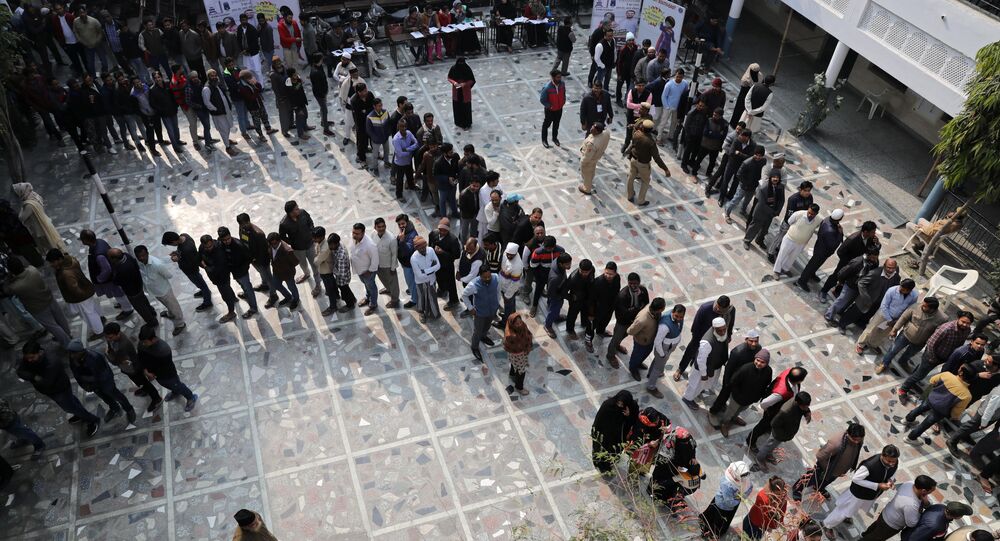 New Delhi (Sputnik): India’s national capital of New Delhi witnessed an estimated 62.95 percent of its population voting for the 70-member assembly on 8 February. Exit polls have predicted victory for Arvind Kejriwal’s Aam Aadmi Party, although the final results are said to be available soon.

The counting of votes from 13,750 polling stations across New Delhi began at 8 a.m. local time on Tuesday (11 February). Early trends had the Aam Aadmi Party ahead in 40 seats, while BJP was leading in 13. As many as 672 candidates were in fray for 70 seats.

There are 21 centres for counting, where votes of 62.59 percent of New Delhi’s 14.79 million voters will decide the final result amid tight security.

The results will reveal the fate of the three main political parties – Aam Aadmi Party (AAP), Bharatiya Janata Party (BJP) and Congress, the latter having crossed their fingers after a month-long political campaign in the streets of the capitol city.

The AAP chief, Kejriwal, is again his party’s chief ministerial face, while neither the BJP or Congress have declared their candidates for the top seat.

The election, held on 8 February, is considered by some to be a verdict on the delivery of promises by the Kejriwal-headed ruling AAP and a BJP opportunity to assume power after two decades.

The main issues surrounding the elections have been law and order, the simple availability of clean drinkable water to all people in the nation, and the hotly-contested Citizenship Amendment Act - which led to month-long protests even in New Delhi.

In the last assembly elections of 2015, the newly-formed AAP came to power with a landslide victory, winning 67 of the 70 State assembly constituencies. The other three seats were secured by the BJP. Congress, which before 2015 ruled New Delhi for three consecutive terms of 15 years total, was eliminated from governance.