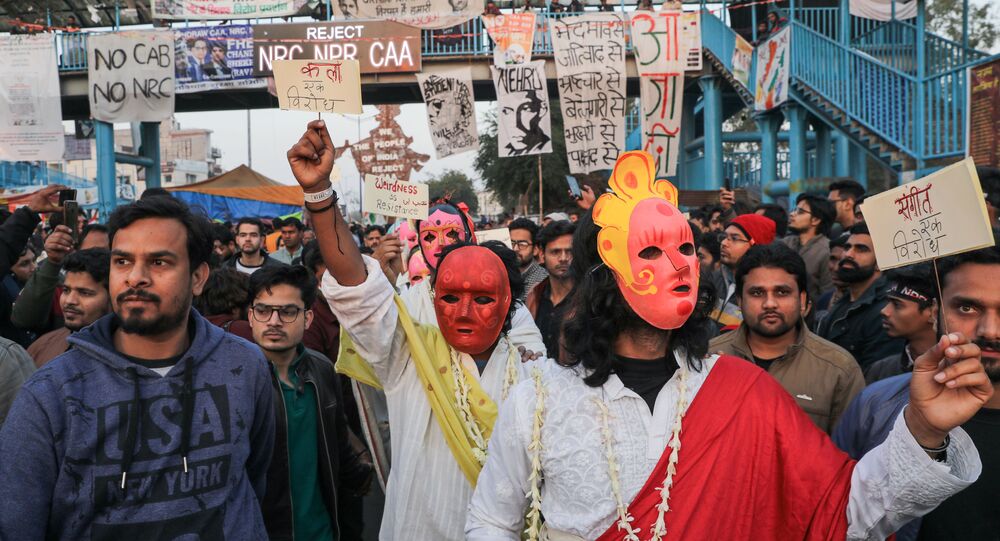 New Delhi (Sputnik): People in India have been opposing a new citizenship law (CAA) since December 2019. The legislation, granting citizenship to religious minorities from Pakistan, Afghanistan, and Bangladesh, is being viewed as discriminatory for favouring only non-Muslim immigrants.

Hearing a petition on seeking the removal of anti-Citizenship Amendment Act (CAA) protesters from Delhi's Shaheen Bagh and clearance of Kalindi Kunj Road, India's top court on Monday said the protest cannot go on for an indefinite period on a public road.

The Supreme Court has issued a notice in the matter and will hear the case on 17 February. The bench has also suggested that there needs to be an identified area for carrying out protests of this nature. It also questioned whether a public road can be blocked in this manner.

Hundreds of women, supported by men, in Delhi’s Shaheen Bagh area have been protesting against the Narendra Modi government’s new ctizenship law and a proposed National Register of Citizens (NCR) since 15 December 2019.

© Photo : Shweta Sharma
Shaheen Bagh-Like Anti-Citizenship Law Protests Crop up in Nooks and Corners of Indian Capital
Two petitions were filed for the clearance of Kalindi Kunj Road, which is in proximity to the site of the protests and has been facing traffic snarls due to the blocked protest area.

The Citizenship Amendment Act, which was passed in December 2019, grants citizenship to Hindu, Sikh, Christian, Buddhist, Jain, and Parsi illegal immigrants from Pakistan, Bangladesh, and Afghanistan who faced persecution in their homelands and arrived in India on or before 31 December 2014. It, however, doesn't extend the same rights to Muslims, something which sparked nationwide protests as people have claimed it's discriminatory. The government, however, denies these accusations.

The NRC is a headcount of citizens of the country and is being introduced to weed out illegal immigrants. The federal government has clarified that it has no plans as of now to implement a nationwide NRC.

The CAA was passed by both houses of the parliament while the NRC, the Indian prime minister and Home Ministry have clarified, is not even being discussed in the government.